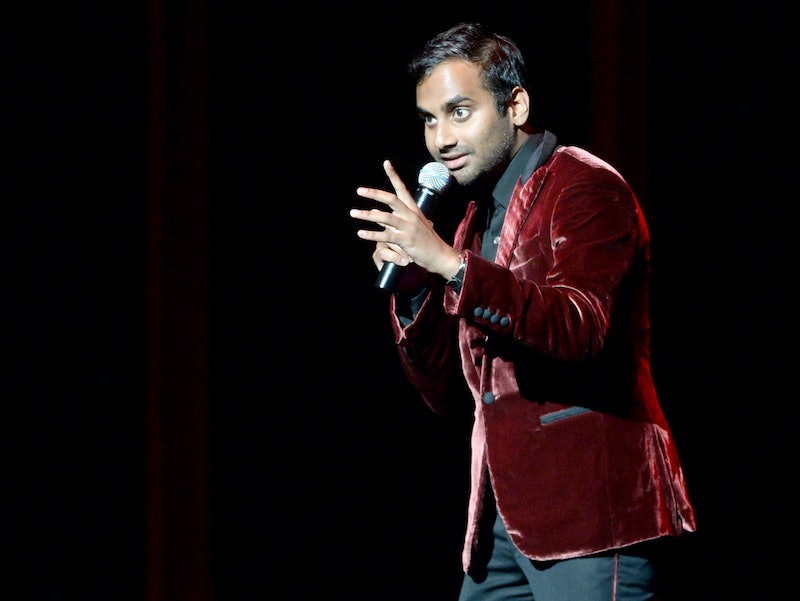 In case you didn't know, and I have no idea how you couldn't, Aziz Ansari is a feminist, using his comedy to vouch for equal rights and to call out his fellow men for their creepiness. Just last year on Letterman, Ansari gave us the best metaphor for feminism: "You're feminist if you go to a Jay Z and Beyoncé concert and you're not, hmm, I feel like Beyoncé should get 23 percent less than Jay Z," Ansari joked, to big applause from the audience, "Also, I don't think Beyoncé should have the right to vote, and why is Beyoncé singing and dancing? Shouldn't she make Jay a steak?" Just Monday night on The Tonight Show Starring Jimmy Fallon, Ansari once again proved his feminist cred in both stories and pictures about his youthful days as a tap-dancing genie.

Inspired by his book, Ansari and Fallon did a segment called "First Textual Experience" where they exposed the creepy, awkward things we do in pursuit of love these days. In Ansari's upcoming book Modern Romance, which comes out on Tuesday, he teamed up with a sociologist to explore the complications of dating in today's world. "It's really surprising the kind of 'bozo' texts a lot of dudes send," he told Fallon, "It seems like a very simple thing to say, 'Do you want to do this specific thing at this specific time?'"

Watch Aziz and Jimmy read out some of the best "bozo" texts here:

In addition to that spot-on segment, Ansari told Fallon about the tap-dancing lessons he took as a child. Hooray for Young Aziz for countering traditional gendered activities. And we even get a peek at an adorable class picture.

At the end of the day, feminism is still a movement that is on shaky legs, and it requires as many people as possible, from all walks of life, and from both genders, to take a stand and point the disparity in the treatment of both genders in our society. For Ansari to be using comedy and entertainment to educate people about things they might not have even realized was sexist is such a great thing. That he does it in such a genuinely funny and interesting way is even better.