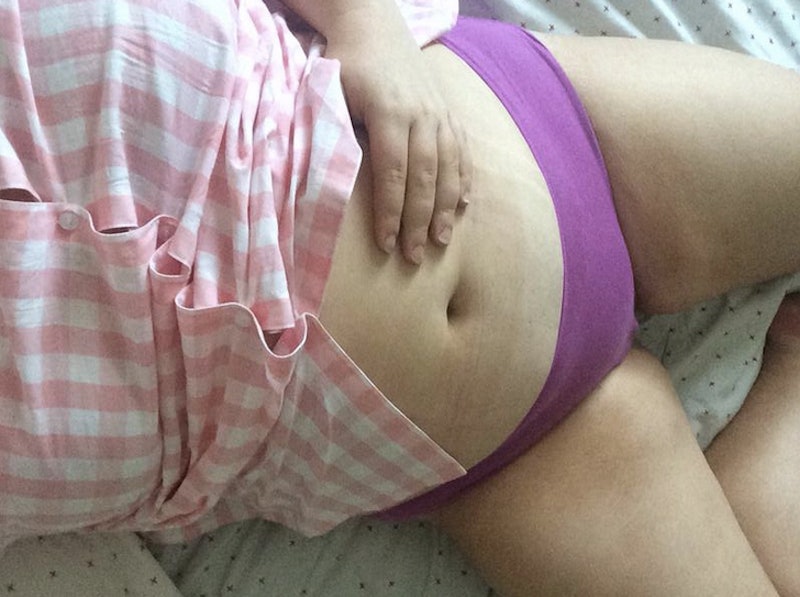 I'm sure that there are a few characteristics that come to mind when you picture the stereotypical vegan: Either hippie-ish (or at least embracing "Boho" in a trendy way), someone who practices yoga, the person who's always talking about their veganism or what animal products are in what, a tree-hugging cyclist, and someone who is definitely slender, right? What was once a fringe diet is now fairly mainstream, thanks in large part to veganism being touted as a weight loss solution — something that's been happily embraced exploited by the most visible animal rights organization through advertising and fat shaming by PETA.

I hate to burst your collective bubbles, but fat vegans — and vegans of all sizes — exist. I know because I am one. I'm totally fine with my weight and size, but what I'm not fine with is normalized fat shaming and weight loss being used to promote an anti-cruelty lifestyle.

Update: PETA has responded with the following statement:

PETA promotes respect for all individuals and it is indisputable that meat eaters and dairy consumers are prone to fat and obesity, even morbid obesity. Drawing attention to that fact is important given the health problems, including diabetes,heart disease, strokes, and more, that are linked to overweight conditions and the propensity of Americans—although not exclusively Americans—to be unhealthily overweight. The ads Ms. Layne has zeroed in on are old, but the fact is that meat and dairy contribute to fat, we believe no one is well served by obesity, and most cases are caused by an unhealthy addiction to fatty foods. If the condition is a genuine, medical condition, we wouldn’t dream of bringing attention to it. We offer free vegan starter kits and even host “Meat- and Dairy-Eaters Anonymous” meetings in Washington, DC to help people who wish to overcome cravings for unhealthy foods.

Thirty-five years of activism for animals has taught us that simply making information available isn't enough—we have to reach out and grab consumers' attention (through tactics that are, perhaps, "controversial," such as a provocative billboard, or a well-known celebrity's involvement) and make them want to find out more about the cruel meat, dairy, and egg industries, which are all wreaking havoc on consumers' health.

This isn't the first time PETAs ads have offended people. Its fat shaming tactics do, however, deeply disturb me, and I hope that they always do. Being excluded from or mocked by communities that you belong to based on your size, or any other factor, isn't anything I want to get used to.

From its "Save The Whales, Lose The Blubber" campaign to the "Be Proud Of Your Body Scan," the BS it has pulled in the name of animal rights isn't just fat shaming and shamelessly controversial for controversy's sake — it's isolating.

Time for me to admit a few things to you, though: I am vegan because of PETA. When I was a young kid living in a small, agricultural town, I had a book of places that would send free stuff to kids upon request. PETA was listed because it would send you free stickers and address labels.

When the goodies arrived, there was a little bit of literature enclosed with my super cute puppy address labels. Combine a ridiculously empathetic 11-year-old and being surrounded by farm life with some animal cruelty rhetoric, and you've got a mini vegan in the making. It would take me until I was 20 to make the changes stick, but those little "I Am Not A Nugget" messages definitely influenced me along the way.

When I first did go all the way vegan, I owned a cherished copy of the vegan diet book Skinny Bitch. Its popularity is very specific to a time in pop culture (as is evidenced by its very outdated website) and I was drawn to the Sex And the City vibe and straightforward language that contrasted the other hippie-dippie books I couldn't identify with. My healthcare provider had suggested that I cut out dairy because it was not doing my body good (mucus-y ears, so cute) and since I was already vegetarian, I decided to just skip eggs and finally take the plunge.

I wan't trying to lose weight, but Skinny Bitch made it pretty clear that a vegan diet is almost always partly about losing weight. Even all the books and websites I read about going vegan warned that relying on carbs to complete your diet could lead to serious weight gain, and there was always a message that a "proper" vegan diet would result in the pounds just falling away. Like stones off the edge off a cliff, you know, the natural way that the body loses weight: falling away! There are so many reasons a vegan may or may not be thin, but the normalization of thinness as a vegan trait is just a myth.

PETA doesn't speak for me, and aside from the general belief that animals should live lives free from harm, I don't share many of its values. Yet, thanks to the huge amounts of money it attracts and how vocal it is as an organization, it's often seen as a representative of all vegans. But its glorification of "weight loss success stories," tying animal products to obesity, and encouraging vegans to go on diets for "bikini season" leads to my erasure.

In fact, there's a lot of erasure in vegan culture. It's often seen as "a skinny blonde white girl thing," when there is actually a diverse array of people who eat plant-based diets for all kinds of reasons, including reclaiming Indigenous veganism. This palatable image of veganism is proliferated by PETA, and leads to me doing a lot of explaining to people that vegans can be fat, assuring them that I really am vegan, and asking food service workers to take my vegan diet seriously. Because I'm fat, people simply don't believe that I'm vegan, or they ask me questions with a wink and a nudge about how often I actually eat vegan, making comments like, "Wow, I guess not all vegans are health freaks!" It's disrescpectful, rude, and tactless: But it's not a whole lot different than the messaging PETA sends.That's why last weekend when @freakinsassy posted photos of her glorious fat bod alongside one of PETA's fat shaming ads, I squealed audibly. Body positive veganism isn't something I see nearly enough of, or experience as much as I'd like to in my life. Others were inspired by this display of self love and PETA-loathing, and the post was retweeted over 2,000 times. Naturally, others joined in the photography aspects as well — and I had to jump on board with a photo of my round belly, too.

Seeing images of other vegans who look like me, whether deemed acceptable by the vegan powers that be or not, was surprisingly powerful. I'm accustomed to being erased and invisible in other places, but for some reason I never really realized how much it stung to have my body reviled and demonized by "the vegan movement." Sure, there can be health benefits to being vegan by choosing foods that are lower in certain kinds of fats and free of cholesterol. It's also very possible to eat in a way that has a similar effect if you're not vegan. You can gain or lose weight eating any type of way, for a multitude of reasons, but being any size isn't inherently healthy or unhealthy.

The reason I and a lot of people I know are vegan is because it weirds us out to drink milk or we don't feel like we'd be capable of killing an animal to eat. I don't think being vegan makes me a better or kinder person than anyone else, though, as I know being vegan isn't a qualifier for being a decent human. There are a lot of problems with vegan culture and still a lot of cruelty and exploitation needed to sustain vegan diets (see: migrant labor abuses, oil needed for transportation, palm oil products, the list goes on).

But if vegans want to lose the "superior asshole" reputation, there's a lot of work that can be done. When it comes to people's body sizes, though, I'm going to have to agree with Kasey Musgraves and get you to mind your own (lard-free) biscuits.

In regards to their response to my request to comment, I don't have much to say here that hasn't already been addressed in the article, but it's ridiculous to me that PETA thinks it can assume people's health simply by their size or a classification that relies on the flawed BMI system. The last time I went to the doctor, my blood sugar, blood pressure, and cholesterol levels were normal. I agree with PETA that meat and dairy can be linked to health problems, and absolutely think that my veganism is helping keep my vitals in check. Being healthy and being fat are not mutually exclusive, as is implied in these ads and PETA's statement.

They also didn't address the question I had about whether people who become vegan to lose weight actually become long-term omnivores. Do these campaigns actually help animals or just boost PETA's profile? In addition, it hurts that an organization who claims to want respect for everyone doesn't mind throwing fat people under the bus to "grab consumers' attention" to further their cause. Well, our cause, I guess. How they can justify those paradoxical things is up to them, however one thing is very clear: I've never been more sure that PETA cares more about themselves than anything or anyone else.