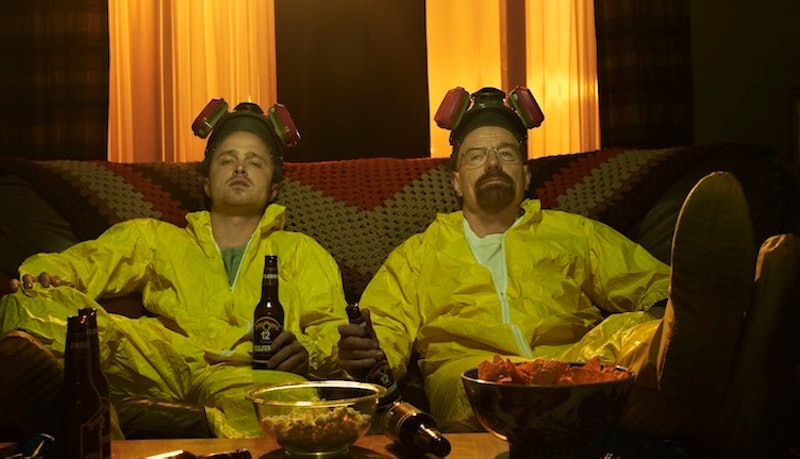 "Would you like us to adopt you?" Marie asks Jesse. "Yes, please," he responds, and it's only ALL WE'VE EVER WANTED IN THE WORLD.

There are multiple things that consistently make Breaking Bad blooper reels just the best: 1) the cast is hilarious and they obviously love each other and we want in on that love. Bryan Cranston alone is a giant ham (not to be confused with the other Hamm on AMC) who does things like show up on set on days he's not working just to be in a scene he's not supposed to be in to troll Marie. 2) This show is really dark, you know? Witnessing the cast goofing off is always a relief in that it reminds us that none of them actually died or had their lives shattered and they're all off living really fabulous lives right now.

What are we gonna do when we officially run out of DVD extras and nostalgic cast reminiscences, guys? How will we cope?

Below you can see three things. They are an illustration of the Jesse's-adopted-by-Hank-and-Marie scenario that is all we ever wanted, the Season 5 blooper reel in question, and the bloopers of seasons 2-4, as well. Because we can. Because the Internet.