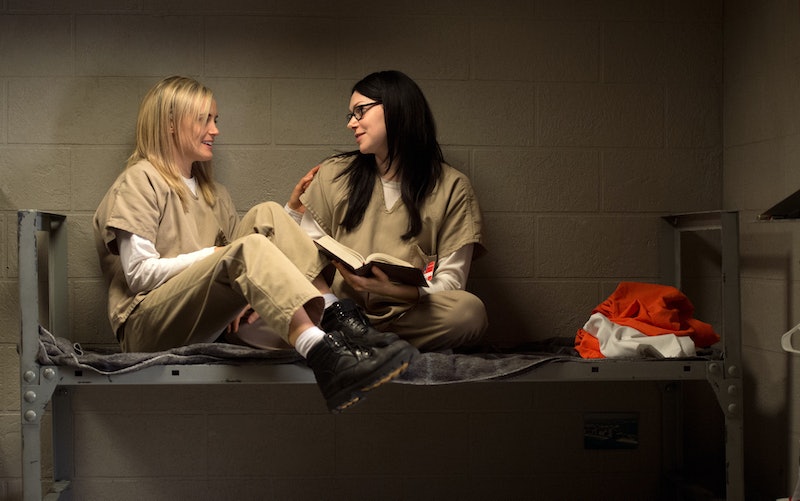 Netflix launched Season 3 of Orange Is the New Black on June 12, and, if you're like me, you've already binge-watched your way through it. But now you've got a problem. After watching all three seasons and reading the book, you're stuck in limbo. No new Orange Is the New Black until next year! What are you going to do with your life?

Sure, you could always re-watch the show, or reread the book, but it’s not the same. It would still be funny and sad, but it just won't feel like the first time. Tonight, you'll probably sit and scroll mindlessly through Netflix, caught in the funk of Orange Is the New Black's wake. Although you long for new adventures with your favorite characters, but you’re stuck drifting through life, wondering what will happen with Daya, Nicky, Sophia, Alex, and all the other inmates you've come to know and love.

But fear not, because I'm coming to your rescue! I've compiled this list of reading suggestions based on your favorite OITNB characters, designed to help you get through all the long, boring days between you and your next summer Netflix marathon. So check it out, read a book or two, and keep your chin up, because Season 4 is already filming.

Much like Chapman, Kaysen feels at first as if there’s been some mistake. After all, nice, upper-middle-class college women don’t become inmates at McLean Hospital. Kaysen refuses to admit that her attempted overdose was anything serious, and does not believe she is complicit in the series of events leading to her psychiatric commitment. Like Chapman, however, Kaysen gradually comes to accept the fact that she does belong in lock-up, and begins to see her fellow inmates as women like herself, rather than as social outliers.

Bitch: In Praise of Difficult Women by Elizabeth Wurtzel

Elizabeth Wurtzel’s more famous memoir, Prozac Nation , might have fit Alex’s background as the troubled employee of a drug kingpin, but Bitch is more in solidarity with the fearless, demanding, don’t-give-a-sh*t Alex we've known in Litchfield. Goodreads calls this book “a brilliant tract on the history of manipulative female behavior,” and where that manipulation has been lauded as evidence of woman’s innately deceitful nature, Wurtzel spins it into a method of success and survival. I think Alex, who will do almost anything to get her own way, would approve.

In Their Own Voices: Transracial Adoptees Tell Their Stories by Rita Simon and Rhonda Roorda

Although OITNB only scratched the surface when it showed us a flashback of Suzanne’s childhood, In Their Own Voices dives into the complicated and controversial practice of transracial adoption. It is important to note, however, that all of the interviewees are African-American or of mixed race, and were adopted into white families. While this does not detract from the insight it provides into Suzanne’s upbringing, it may disappoint readers who would like to hear from adoptees of other races, or from the rare white individuals adopted into minority families.

Harley Loco: A Memoir of Hard Living, Hair, and Post-Punk, from the Middle East to the Lower East Side by Rayya Elias

Like Nichols, Rayya Elias is born to affluent parents. Her rebellion against her family’s social position begins as a cry for acceptance and ends only after she has become drug addicted, homeless, and familiar with New York’s bullpens. It’s the kind of book you can imagine Nichols writing, complete with her discovery of lesbianism and her love affairs with injectable narcotics. In particular, Nichols’ fans will enjoy the hope of redemption, something which Elias found and Nichols may yet achieve.

Vera Figner, a mid-19th century Russian noblewoman, managed to live to a ripe old age despite insurmountable odds. Her tenacity and heritage remind us of Red: one of the strongest, hardest, and most respected women in Litchfield. Turning against her powerful class, Figner joined a populist terrorist organization, attempted to assassinate the Tsar, served 20 years in a penal colony, and survived Stalin’s political purges. Also of interest may be Figner’s own autobiography: Memoirs of a Revolutionist.

Zami: A New Spelling of My Name by Audre Lorde

Audre Lorde’s “biomythography” will speak deeply to Poussey’s fans. Throughout Zami, Lorde weaves a powerful and eloquent story about finding her place in the world as a black lesbian thinker. Her life — in reality as in print — was lived in pursuit of finding herself and achieving success as she defined it, not according to anyone else’s terms. Regarding her relationship with Muriel, her longterm lover, Lorde writes, “I cried to think of how lucky we both were to have found each other, since it was clear that we were the only ones in the world who could understand what we understood in the instantaneous manner in which we understood it.” I think Poussey would understand, too.

A Piece of Cake: A Memoir by Cupcake Brown

OITNB fans know that, despite her repeated stints in prison and unfortunate childhood, Taystee’s real dream is to become an attorney. Cupcake Brown’s memoir chronicles her time in the foster care system before she slipped into a life on the L.A. streets. While struggling to get her life in order, Brown attended college and went to law school, eventually breaking free of her drug addiction and criminal background.

Yoga Bitch: One Woman’s Quest to Conquer Skepticism, Cynicism, and Cigarettes on the Path to Enlightenment by Suzanne Morrison

No one could forget Yoga Jones’s heartbreaking backstory. Given what we already know — that she smoked pot and drank before converting to Buddhism — pre-prison Jones might have been something like Suzanne Morrison. Morrison’s plainspoken humor will appeal to fans of Jones, who often tells it like it is, albeit from a place of love and acceptance. Ultimately, Morrison’s goal is the same as Jones’: to pass on what she knows and help those she can by imparting her flawed wisdom to them.

Many OITNB fans will already be aware that Sister Ingalls is based on a real-life radical pacifist: Sister Ardeth Platte. Unfortunately, Platte has not yet written her memoirs. In light of this, I’ve chosen Margaret Farley’s Just Love for fans of Sister Ingalls. Because it does not adhere to today’s conservative dogma regarding sexuality, Farley’s book has been controversial since its publication in 2006. Farley’s affirming and understanding attitude will be refreshing to anyone who has dealt with other people’s hang-ups when trying to navigate her own choices.

Redefining Realness: My Path to Womanhood, Identity, Love & So Much More by Janet Mock

Before Caitlyn Jenner, there was Laverne Cox. And before Laverne Cox, there was Janet Mock. After working as a staff editor at People, Mock gained notoriety for her trans* activism. Redefining Realness is the first memoir written by a transwoman of color, and has been wildly popular since its publication in 2014. While Mock’s books will undoubtedly speak more to the trans* community, all readers can take something away from this coming-of-age story about self-discovery and self-acceptance.

Newcomer Stella is still much of a mystery to OITNB fans, but she's already got a solid fanbase. If you loved her character, bump Rita Mae Brown's Rubyfruit Jungle to the top of your reading list. While some may take issue with the book's negative presentation of butch lesbians — and my association of the book with Stella — it isn't difficult to imagine Rubyfruit Jungle as Stella's backstory, and Stella herself as a post-New York City Molly Bolt.

This season gave us a peek at Big Boo's backstory, which included confrontations with her mother, microaggressions from her father, and plenty of verbal abuse from strangers in reaction to her butch brand of lesbianism. Like Boo, author Leslie Feinberg — who preferred the pronouns ze and hir — found hirself caught between gender performances. Surviving as a butch woman was nearly impossible, but taking hormone treatments in order to live life as a man alienated hir from the lesbian community. It's a book filled with hard decisions, with which Boo's fans will sympathize.

When God Talks Back: Understanding the American Evangelical Relationship with God by Tanya M. Luhrmann

Pennsatucky made some pretty big changes in Season 3. The former homophobe even befriended Big Boo. Though we now know that Pennsatucky's religious zeal is not entirely genuine, some OITNB fans may have a difficult time understanding the draw of fundamentalist Christianity. Enter When God Talks Back: an examination of average U.S. evangelicals' relationships with their religion. Although most of the individuals profiled aren't violent offenders like Pennsatucky, their words will help anyone who struggles to understand one of Litchfield's most interesting characters.

Bald in the Land of Big Hair: A True Story by Joni Rodgers

Though Miss Rosa is no longer with us, she deserves an honorable mention. By the beginning of OITNB, Miss Rosa had become thankful for her disease, remarking, “Thank God I got cancer. No one fucks with cancer.” Joni Rodgers may not ever have robbed a bank, but she faces her lymphoma diagnosis and treatment with Rosa’s same humor and slow acceptance. According to Barnes and Noble, Rodgers’ chemotherapy comes with “the death of a thousand small vanities,” not the least of which is her Texas-sized hairdo. But despite her losses, Rodgers learns to appreciate the small joys of her life and put her own well-being first: lessons from which we can all learn.

More like this
10 Must-Read Books Out This Week
By K.W. Colyard
16 Novels That Paint A Realistic Portrait Of Abortion
By K.W. Colyard
25 Spell Books For Every Type Of Witch
By K.W. Colyard
This Michigan Couple Really Won $27 Million After Finding A Lottery Loophole
By Brad Witter
Get Even More From Bustle — Sign Up For The Newsletter