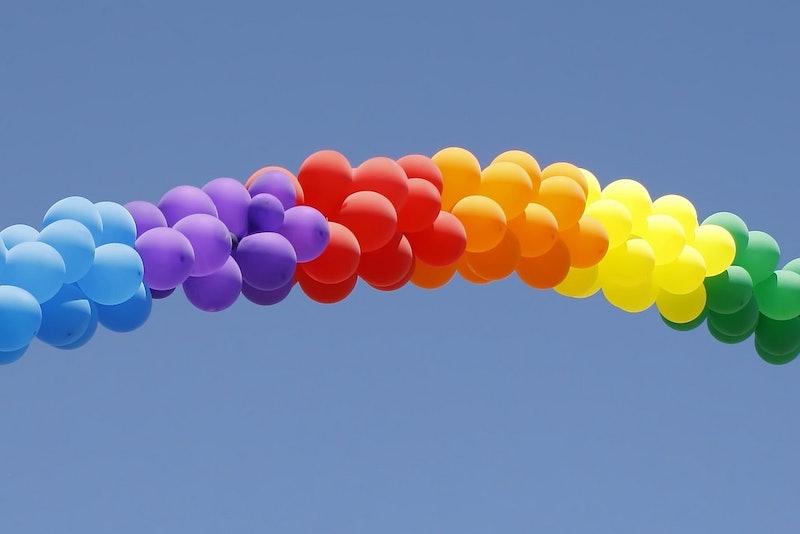 In 1973, a remarkable and revolutionary book came out: Rubyfruit Jungle by Rita Mae Brown. It's being reissued in June with a new cover to the delight of many women for whom the book was the coming out story we identified with — before Alison Bechdel or Willow and Tara from Buffy the Vampire Slayer . When Brown's story hit, there was by no means wide acceptance of people identifying as anything other than cis and straight, and her tale was remarkable. Hell, it still is.

Rita Mae Brown doesn't quite see her book the way I — and so many members of the gay community — do. When I asked her whether she knew she was writing a revolutionary book, she answered concisely: "No." Brown doesn't even see Rubyfruit Jungle as necessarily being a force for today's LGBTQ culture — she shrugged off the acronym, telling me that it's a group of letters used to:

bundle people together and manipulate them as bloc voters or it is used for commercial appeal ... Someone may be lesbian, gay, bisexual, transexual, transgender, or queer but such terms are the ones created by our oppressors. They tell you little about another human being.

It's pretty interesting to hear that Brown does not see her book as a seminal text for so many lesbians — and so many people, period. Brown's thinking shows that she continues to think outside the box about the LGBTQ community — something that made Rubyfruit Jungle so influential when it was released, and something that definitely makes it continue to endure. And, regardless of how Brown sees her book, so many people will find Rubyfruit Jungle as resonant and relevant today as it ever was, even with the slowly expanding rights given to same-sex couples and LGBTQIA individuals.

So, if there's one book you should be reading this Pride Month, it's this one. Here are just some of the issues that Brown subtly deals with in the novel, prevalent in feminist and queer theory discussions, that are as important to tackle today as they were in 1973:

After the incident with Detwiler's penis and Molly's dubious entrepreneurship, her mother reveals that Molly is not her real daughter, but rather adopted from a "common, dirty slut who'd lay with a dog if it shook its ass right." The notion of slut-shaming is all around us today. Molly, however, doesn't care to shame her biomom: "I don't care. It makes no difference where I came from. I'm here, ain't I?"

Discussion of Marriage: Civil, Not Religious

Once Molly knows she's adopted, she tells her cousin Leroy that they're not blood related, and explains to him that marriage is:

a piece of paper, that's all I can figure. Some people don't even have to stand in front of a preacher so it ain't religion. You can go on down to the courthouse and sign up... Then you hear words said over you and you both sign this piece of paper and you're married.

With the overturning of DOMA a few years ago, and this month's SCOTUS decision regarding same-sex marriage being enforced across all states, the idea of marriage not necessarily being a religious act is essential. After all, many of those who disagree with legalizing same-sex marriage cite religious texts as their proof for why such unions are unholy. But way back in 1973, little Molly knew that marriage was a ceremony that all people could have.

Marriage As Option, Not Necessity, For Commitment

The issue of marriage for many LGBTQIA activists revolves around the notion of equal rights. At the same time, many people today, straight or queer, see marriage as a less and less important institution that's important mostly for tax and legal reasons but not as the ultimate commitment to one another. As Molly says: "Leroy, we don't need to get married. We're together all the time. It's silly to get married. Besides, I'm never gettin' married." Then again...

When Molly is in 6th grade, she has a crush on another girl. Part of what is groundbreaking about this book as a whole is Molly's assumption and understanding right from the start that this is possible — to have a crush on a girl is entirely reasonable and makes sense to her. "I began to wonder if girls could marry girls," Molly narrates, "because I was sure I wanted to marry Leota and look in her green eyes forever."

Still an issue within the LGBTQIA community and something many of us talk about a lot. So-called radical queers often want to tear down the entire notion of heternormativity, but (just like in the '70s) it's still extremely hard to escape the entrenched hetero roles in our culture. Right after Molly thinks about marrying Leota, she says, "But I would only marry her if I didn't have to do the housework." That is to say, Molly doesn't want to be the heteronormative idea of "the woman" in the relationship. The fact that we still today see these roles everywhere, from real couples to commercials, means that we need to continue talking about this.

The Importance Of Gender Identity (On The One Hand)

Alhough Molly has relationships with other girls (she loses her virginity with Leota), once she starts college and has an affair with a roommate, they're found out and Molly loses her scholarship and gets kicked out of school for "moral reasons." Fleeing to New York City, she meets Calvin, an African-American guy who's escaped a sticky situation: he's gay, but in order to "go straight" for his family, he slept with a woman and she got pregnant. He fled because he didn't want to marry her, but he's aware of the complications: "Do you think I'm a shit for leaving her?" he asks Molly. She agrees that it's problematic and asks him whether they talked about abortion. He says: "She screamed and carried on about how that was murder... She thinks motherhood's gonna make her a natural woman or something."

Later in the book, when Molly sleeps with a woman who fantasized about being a man, she's repulsed, because she is attracted to women, not men, and she recognizes that her new lover's fantasy (or maybe more of a reality than the woman realizes) gives her a different gender that Molly doesn't jive with. Gender identity and its fluidity is something we're continuing to talk about in the queer community, and probably will keep talking about for a good long time.

Something we still often discuss is the idea of sexual and gender identities being important. They clearly are important in the society we live in, but Brown did make a good point when she told me that the labels we put on ourselves and others — the "alphabet soup" of the LGBTQIA (plus 2S, especially in Canada, for two-spirit) acronym "robs people of their individuality which is always the hallmark of oppression."

In the novel, Molly expresses a similar opinion: "Why does everyone have to put you in a box and nail the lid on it? I don’t know what I am — polymorphous and perverse. Shit. I don’t even know if I’m white. I’m me. That’s all I am and all I want to be. Do I have to be something?"

This is another conversation we hold, especially during Pride Month, when identifying with the queer community is essential to participation, even for allies. Why do we put labels on ourselves? Why do we need them? These are always relevant questions, especially during an age where we're still learning to use terms to describe Caitlyn Jenner.

Harassment Is Still A Thing

At the end of the novel, Molly says:

I wished I could get up in the morning and look at the day the way I used to when I was a child. I wished I could walk down the streets and not hear those constant, abrasive sounds from the mouths of the opposite sex. Damn, I wished the world would let me be myself.

As a woman, as a lesbian, Molly is harassed by men, just as many of us are today. While Pride Month is meant to celebrate the identities of many, that doesn't mean that harassment doesn't happen, nor that it is something that the queer community has somehow fixed. Members of all genders are objectified, during Pride Month and its various events as well as during the rest of the year. We're still working towards equality of all kinds, and we're not there quite yet.

More like this
16 Novels That Paint A Realistic Portrait Of Abortion
By K.W. Colyard
Jake Daniels Just Became The UK’s First Active Football Player To Come Out As Gay Since 1990
By Sam Ramsden
Target Dropped *Two* New Fashion Collabs With Queer-Owned Brands
By Dominique Norman
'Heartstopper's Kit Connor Called Out Twitter For Making Assumptions About His Sexuality
By Nola Ojomu
Get Even More From Bustle — Sign Up For The Newsletter