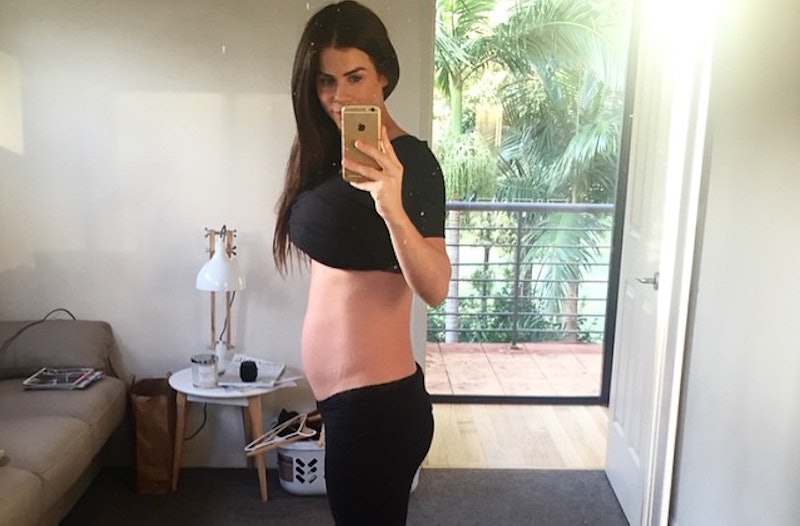 Although I'm fairly in-shape, I will use any excuse I can think of, however flimsy, to avoid working out: a poor night's sleep, cloudy weather, Mercury retrograde... You'd think that pregnancy would be the ultimate reason not to hit the gym, but try telling that to Sophie Guidolin, Australian model and badass pregnant weightlifter extraordinaire. Rather than using her pregnancy (with twins, no less) as an opportunity to laze around and eat bonbons all day, Guidolin hasn't let the buns in her oven slow her down one bit. In fact, judging from her Instagram, she could probably still run circles around the rest of us, all while maintaining a healthy glow instead of turning into a disgustingly sweaty mess like me. Can you tell that I want to be her when I grow up?Some people, however, are rather less enthusiastic about her fitness regimen. When Guidolin recently posted a photo on Instagram and Facebook of herself lifting a 30 kilogram (kg) weight while visibly pregnant, thousands of people started flipping out almost immediately. Although she had her physician's permission and explained in the photo caption that "each pregnancy is different [and] exercises that... anyone else may be doing may not be safe for your body to perform," her Facebook post was flooded with comments censuring her for lifting weights while pregnant.

Guidolin told the Daily Mail that the comments have primarily been from men who think that 30 kg is too heavy for a woman in her condition, to which she had the perfect response. "I had a man comment on my Facebook page saying that what I was lifting was considerably heavy — but considerably heavy to who? Him?" she said. "To me, that's not a heavy weight."

<img width="805" alt="regular show animated GIF " src="http://media.giphy.com/media/P0UveJCYp89NK/giphy.gif" height="365" class="article-body-image"/>Guidolin says that she regularly lifted twice that weight before her pregnancy, and she has been working out under the supervision of her husband, who is a dietitian and personal trainer. She told the Daily Mail that she is "gobsmacked" by all the criticism, and that much of her family has had to unfollow her Facebook page because the comments were too distressing. Her situation is eerily similar to American model Sarah Stage, whose amazingly fit body during her pregnancy subjected her to a firestorm of media criticism because people just can't pass up the opportunity to tell a woman what to do with her body. I know, I know — grass is green, the sky is blue, body-shaming women is an international pastime. What else is new? But Guidolin is rightfully worried that the controversy will lead other women to avoid working out during pregnancy, when there is no reason to do so. The American Pregnancy Association states that exercise is in no way connected to miscarriage, and according to the Mayo Clinic, it can even relieve back pain, improve energy, and prevent excess weight gain (with a doctor's permission, of course).

In fact, Guidolin says her current pregnancy has been significantly easier thanks to her exercise regimen. She gained 61 pounds with her previous two pregnancies, which she attributes to a lack of exercise, but this time around, she has only gained 15 pounds and is "feeling Despite her personal level of fitness, Guidolin doesn't want women to feel like they have to live up to her example. "All I want is for women to embrace an active, healthy lifestyle and realize the benefits," she told the Daily Mail. Isn't that something we can all agree on?