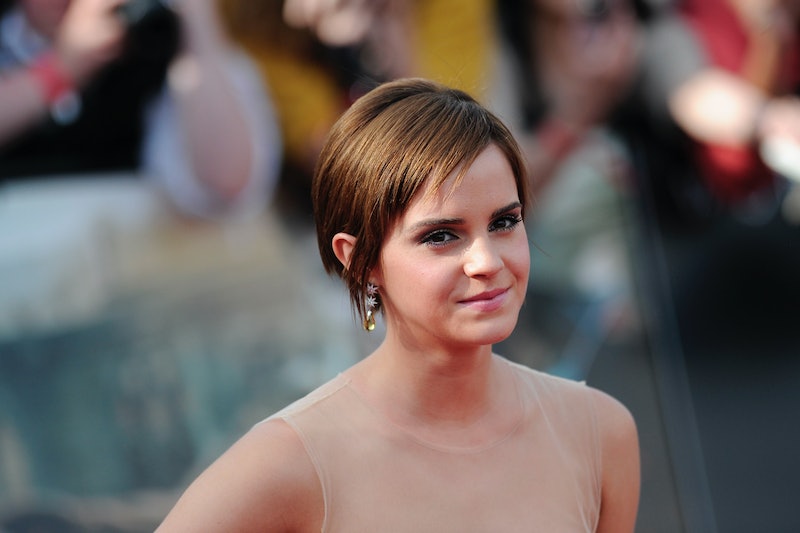 As anyone who's had one can tell you, there are certain emotional stages to growing out a pixie cut. Sure, lopping locks to sport a short hairstyle has its perks. If you don't count the time and product (and money to purchase products) spent maintaining a bob, it seems like the only reasonable hair option. However, like all styles, one might tire of doing the same thing for so long and seek other hairy adventures. This is great! That's life: Trying new things. But getting to the next new thing in this scenario (longer hair) takes time and patience.

After close to seven years keeping a closely-cropped 'do, I decided a few months back to start the painful process of growing my hair back out. Isn't that a weird phrase? "Growing hair out"? Out to where? Who knows, I guess. Or at least, that's my canned response when an old friend runs into me and asks about my hair plan. I am lucky enough to have a highly talented, highly patient stylist aiding the process who helps me look as mullet-free as possible during this difficult time in my life. Because, you see, if you were to ask most short-haired women to be honest, many would reveal several failed attempts to grow her coif back out. It may seem like a passive affair, but we're only making it look easy, guys. Sometimes it's enough to make ya wanna scream. Here are some of the emotions involved in doing so:

It's been a while so, yeah! Why not get back in the ponytail game??

As a grown-ass adult, you know it's wise to do your research before jumping into a project, hair projects included. You may even create a Pinterest inspo board. It may even be a public one.

After about halfway through your seventh YouTube tutorial, you wonder if your fingers are physically coordinated enough to even be capable of French braiding your bangs.

That...looks French enough. If you avoid the image of the back of your head in a mirror at all costs, that is.

Buuuut it takes nine bobby pins and a frequent spritz of hair spray to stay put. How the hell will you ever maintain a sleek look when your bangs jab your eyeballs and the back part is starting to look like a feral dumpster animal?

All this drama happening and you're only indoors. Ugh, because outside it's...

To outsiders, you may appear to be a regular, laughing mobile rat's nest, but in reality, you are a hollow, sobbing mobile rat's nest. Summer is the ultimate test to your conviction in this whole growing-hairs-out movement. It's hot and the scissors are so shiny and suddenly...

Your hair dissolves into gloop. Humidity zaps it to bow deeply onto your sweating skin—and it stays there.

You have to duck inside near a fan or window unit or open freezer door to silently bawl. Only for a little bit (no more than 45 minutes).

You remember bobby pins exist and place no personal limit in the amount you shove atop your noggin.

Why did you ever even start this insane project?

If you cut it now, it's like you're forever immortalized in Cousin Laura's wedding album softly weeping with a mullet for no reason. You want a reason. All of this needs to have meant something, dammit.

We're all hip to angry sex by now, but at this point, you experiment with angry styling. And the results are total garbage.

Suddenly you get a practiced enough handle on the situation to feel comfortable being in public again.

You catch your reflection and instead of sighing like a frustrated farmyard animal, you involuntarily think, Dayuuum.

You catch sight of literally one even borderline acceptable-looking short cut (and let's be real, most of them are beyond adorable), you question EVERYTHING. And possibly book a hair stylist appointment ASAP.