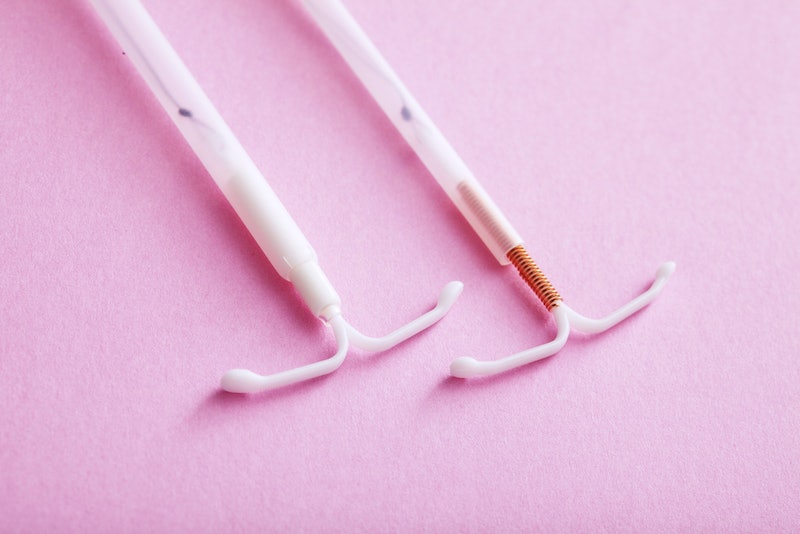 Despite the fact that Intrauterine Devices (or IUDs) are the most effective form of reversible birth control, fewer than 12 percent of women who use birth control report having an IUD. But researchers in California say that educating birth control counselors more about IUDs could make those numbers go up. And that's a good thing, because there are all sorts of benefits to IUDs that other birth control methods just don't have.

The U.S. has one of the highest rates of unplanned pregnancy in the developed world; in fact, about half of all pregnancies in the U.S. are unplanned, either mistimed or straight up unwanted. That number is pretty shocking, but it makes more sense when you consider the obstacles American women often face trying to get affordable birth control — and how difficult it can be for women to get objective, up-to-date information about about their reproductive health.

Instead of trying to educate women about IUDs, though, researchers in California decided to see if a different approach was more effective: educating health care providers about the most recent information about IUDs. And what they found was that by stressing the benefits of this method to health care providers, patients benefitted in a big way; the rate of unplanned pregnancy among young women in the study was cut in half.

"Providers were much more likely to counsel them on these highly effective methods — IUDs and implants," the study's lead author Cynthia Harper, a UCSF professor and family planning researcher, told NPR. "Women had demonstrated greater knowledge of these methods. They were more likely to select them."

And that is pretty great, because IUDs are awesome. Here are just a few of their advantages.

1. They're the Most Effective

I mentioned this up top, but it bears repeating. IUDs are the most effective reversible form of birth control with a failure rate of less than one percent in any given year. It's counter-intuitive given that IUDs are so tiny and flimsy-looking, but it's true. Only sterilization is more effective and that's, you know, permanent.

One of the things that makes IUDs so effective is the fact that they're easy. Other birth control methods like the pill or even hormone injections require continuous use. You have to remember to take your pill every day at the same time, or to schedule your hormone injections every few months — and so even though when used as directed those methods are roughly as effective when used perfectly, they still fail more often because humans aren't perfect. But IUDs don't rely on fallible humans to keep things running smoothly. Once you have one put in, you don't have to do anything else for years.

3. They're Cheaper in the Long Run

Initial costs for IUDs are pretty hefty, but they're a worthwhile investment. After the initial cost, you don't need to pay for anything else for the next few years, meaning they typically pay for themselves and then some.

Although there are some potential complications with IUDs, as with any form of birth control, they are still very safe. They've come a long way since the 1970s.

Though people can get freaked out about the possibility that birth control (and especially IUDs) might mess up their ability to have children some day, IUDs don't have any effect on your long term fertility. Once they're removed, you can get pregnant as easily as before.

So there you have it!