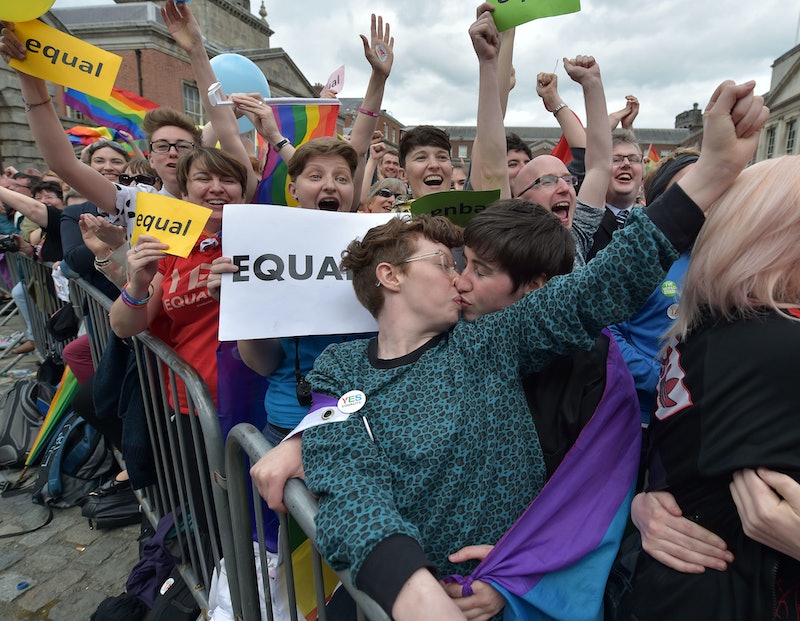 According the results of a new online survey 90 percent of same-sex couples think the option to marry their partner is important to their relationship. Hear that, SCOTUS? A whole whopping 90 percent would love it if you could be ever-so kind so as to grant them the RIGHT to marry the person the love. Such a novel idea, I know.

But in all seriousness, as we get closer to the day that the U.S. Supreme Court rules on same-sex marriage equality in the States, these studies and surveys become more and more important. They serve as an eye-opening glimpse into how the nation feels about marriage equality and proves that the majority of us, at 57 percent, want same-sex marriage to be legalized once and for all.

This latest study comes out of the University of Cincinnati. Published in the most recent Journal of Homosexuality, the researchers conducted a national survey of 526 people who are currently in same-sex relationships and have been for at least six months. The participants, ages 19 to 74, were asked their thoughts on living together and what marriage means to them. Of those who participated, 47 of the states were represented (no Alaska, Idaho, or South Dakota), and the majority, at 67 percent, live in states where same-sex marriage is not an option for them. So what did these people have to say? A lot.

Here are the reasons why marriage is important to same-sex couples and what living together means to them.

1. Majority Of Couples Feel Legal Benefits Are Most Important

I think straight couples take for granted just all the benefits that come with marriage. Not only do you have access to health benefits through your partner, but you get a tax break, and should you die, your partner automatically becomes your next of kin. That right there, the right to be next of kin if something should happen to the person you love, is tremendous.

Because these things are so important, 91 percent of same-sex couples would love to finally get the legal benefits and financial protections that come with marriage. Right now, depending on their state, they just don’t have that.

2. Just Over A Third Of Couples Believe Marriage Will Make Their Relationship Legit

As the study found, the second most important concern for same-sex marriage is having “societal legitimacy,” for their relationship. For some couples, their family would finally view their relationship as “real” if they were married. At 36 percent, this was a major interest for those surveyed.

While we do talk up the whole marriage equality thing quite a bit, according to the survey, the amount of couples who think marriage is about equality is less than you’d think.

4. The Symbol Of Commitment Is The Top Reason Why Same-Sex Couples Live Together

Of those surveyed, 36 percent believe living together gives emotional support to the relationship, 34 percent feels that it makes them a family, and 32 percent wanted to share their life with the person they love. Only seven percent said that living together was just a convenience.