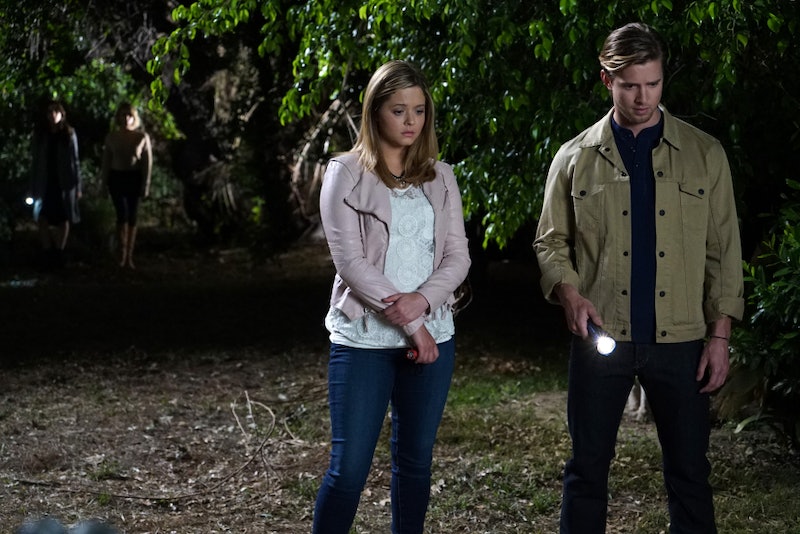 Charles' existence on Pretty Little Liars has finally been confirmed. Do you realize that this whole time we were just assuming there was some guy out there named Charles, because Spencer happened to rearrange some blocks in her mind? It was totally unconfirmed that Charles is an actual human being, rather than a moniker, until now. But he's real: He's a member of the DiLaurentis family — or, was a member of the DiLaurentis family — and as we learn in the episode, Charles was sent away as a child. Ali can't remember him at all, Jason can sort of remember this Charles as if he were a dream. Now it's time to figure out why Charles was sent away from the family in the first place, and I think it's because Charles hurt Ali as a child.

It's been established that Charles is older than Ali, but whether he's Jason's twin brother, or older or younger than him, is still not clear. But, Big A is a sibling — we know that for sure, finally. So what would cause a mother and a father to send their young child away from the family forever? That's a really short list of things that would cause a mom and dad to basically banish a child, never to speak of them again and then remove all traces of their existence. Charles had to have done something awful. It probably had to do with Ali.

Bear in mind, we still haven't fully met Charles, or even seen any images of him other than the ones in the home movie in the Dollhouse. But during that home movie, Mrs. DiLaurentis asks the two to "say goodnight to [their] sister" and then finishes with, "Good boys! Good boys!" when they both lean in to give her a kiss. There's also a moment where Mrs. DiLaurentis actually grabs one of the boys' hands to hold it (I'm going to guess, that's Charles).

It's the way she says, "good boys!" She's praising them for being so careful, and kind, to their sister, as siblings should. So now, what would happen if suddenly one of them wasn't kind, careful, and caring to little Ali? Let's say that Charles, instead of kissing Ali, hit her. Or pushed her, and as a child she fell. Or — how about this to bring it all full circle — Charles accidentally hit little Ali on the head with a rock. Those are all things that might cause parents to worry about the mental state of their child, and might cause them to fear for the safety of their other children.

Mrs. DiLaurentis says, "good boys!" and that's still what's sticking in my mind. One day Charles just wasn't good anymore, and he was sent away from the family. Ali was too young to know about him in the first place, and Jason was too young to understand what was happening. That would explain why they know nothing about him right now.

The curve ball in this whole thing is that Charles is now — supposedly — dead. At least, that's what the promos for the next episode of PLL, "Don't Look Now," suggest. Charles' alleged death is still completely separate from why he was sent away as a child. So let's just focus on what we do now for certain. Charles was part of the family, and then he wasn't. He was sent away because he hurt Ali, and wherever Big A is right now, he's still trying to hurt her — something Charles wasn't fully able to do.