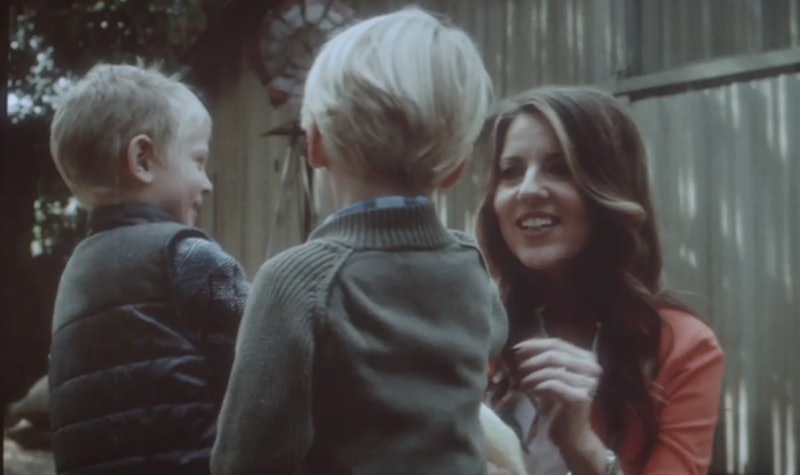 Well, that would be quite a PLL twist, huh? After denying there being anyone named Charles in their family, Mr. DiLaurentis finally sat down with Ali and Jason to talk about the mysterious boy with a connection to their family. Unfortunately, fans weren't able to actually hear the conversation, so we don't know exactly what Kenneth said, but a preview for next week's episode of Pretty Little Liars suggests that Charles DiLaurentis is dead — or at least, that's what Mr. DiLaurentis told his children.

In the promo for next week's episode, "Don't Look Now," we see Alison addressing the Liars, telling them that Charles couldn't have been the one to torture them in the dollhouse. Why not? Because he's dead, she states simply. It's not much of a leap to say that this is probably what Ali's father told her, now the only question is if he sincerely believes Charles is dead, or if he's lying yet again. Up until the final moments of the episode, Mr. D denied Charles' existence and only started to spill when he was backed into a corner, thanks to Aria finding a photo of Charles, Jason, and Mrs. D, apparently from the same day at the farm shown in the dollhouse's home video. At this point, he's obviously just used to lying about Charles. First he told Jason, then a young child, that "Charlie had to go away," and later convinced him that Charlie was just his imaginary friend. When confronted with the name Charles by Ali, Kenneth didn't even mention this "imaginary friend," instead denying any connection to the name. So why should we believe him that Charles is dead? It's enough to make anyone theorize nonstop, as we do in Bustle's Pretty Little Liars podcast, "Taking This One To The Grave."

If Mr. DiLaurentis does truthfully believe that Charles is dead, I think it's because that's what Jessica told him. We know that she kept many secrets, and considering her reaction to Alison being attacked, time spent at Radley, and email to someone about not being able to protect them anymore, it's likely that she was still in contact with Charles. But maybe Kenneth didn't know that. Maybe there was some sort of accident, and Jessica convinced everyone that Charles died, only to hide him away at Radley, or put him up for adoption under a different identity.

Or, maybe Mr. DiLaurentis is as much of a liar as Spencer made him out to be, and he's so committed to this lie, he just can't bring himself to reveal the truth about Charles — even if it means putting Alison and everyone she knows in danger.

For another Charles theory, check out the video below.