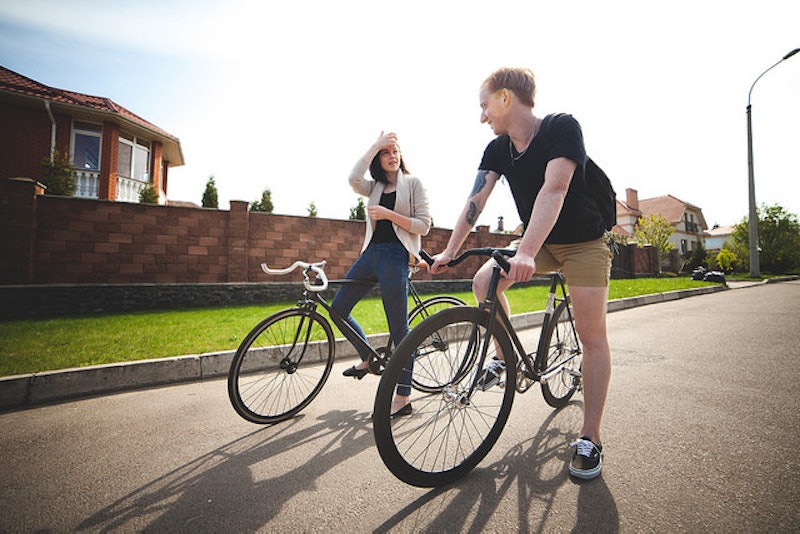 Whether you're in the beginning of your relationship or have been together for few years, how do you know if you're dating the right person? I got into a rambling 1 a.m. conversation about just that with my best friend last night, who is going through a breakup after a five-year relationship. Sometimes it can be hard to tell: I definitely got involved with someone in my early 20s who turned out to be deeply wrong for me, but it took me six years to really figure that out. You get involved, you fall in love, you throw caution to the wind, you scream "YOLO" in the face of a potentially incongruous match, you wind up spending a few too many months (or years) with someone who is not ultimately the right match. Life.

Don't get me wrong: I don't regret any of my relationships, and I am so grateful for all of the things I've learned via people I've dated. When I was younger, it was easier for me to get involved with someone simply by virtue of his jawline or cultural cache or general bad-boy nature. My priorities were different. These days, I'm healthier, which translates to valuing different things — namely, happiness and compatibility and mutual understanding and appreciation, aka a good relationship. On that note, here are ten relationship yeses and nos, because if you're with the wrong person, you probably already know it and it's time to jump ship. And if you're with someone who's right for you, props!

Maybe they are a bartender, and you wish they'd be a lawyer instead. Maybe they tell jokes you don't like. Maybe you find yourself wishing they'd cut their damn hair already. Big or small, no matter: If you're hoping they'll be some way other than exactly the way they are, you're probably with the wrong person. Conversely, if you find that you accept them for who they are and support their endeavors, whatever they may be (and inwardly squeal with delight when they do the little things that make them them), you're probably with a good match.

2. No: You feel embarrassed by them.

We all do dumb things, but if you are with the right person, you'll stand up for them when they say or do something foolish — not ridicule them, inwardly or outwardly.

I read somewhere that if you're in a good relationship, you're more likely to be able to keep your mouth shut about trivial little things that bother you about your partner, because you know how good the relationship is and the fact that they always leave their socks on the bathroom floor or feed their cat in the middle of the night is actually NBD. I think that's true — when I was with someone that I was actually not crazy about in the end, his idiosyncrasies drove me nuts. But really, a person's quirks are part of what make them who they are, and socks on the floor are actually not a problem. If you're not happy, anything can become a problem.

4. No: You don't really care about their best interest.

Maybe you go along with them to their favorite band even though you hate the music, or you accompany them to a gallery even though you'd rather be doing something else, but you do it grudgingly. Not a good sign. If you're with the right person, you'll want to do what they want to do, even if it's not your cup of tea, because you want to support them.

5. Yes: You think they smell amazing.

Science backs me up on this one: If you can't get enough of smelling your partner's neck, you are likely genetically compatible. Pheromones are real, people.

Maybe you're scared this is the best you can do, so you might as well hang in there. Look, it happens to the best of us. It's a common fear. But let me just say right now: It's only a fear. Like a monster under the bed, it disappears when you shed some light on the situation. So for the love of all that is holy, turn on the light.

OK, real talk: Sometimes sex is really, really good. And you can't imagine having better sex with anyone else, ever. But good news: This is just a fear! There's always better sex out there, with someone with whom you truly relate on a heart level. If you're capable of that kind of sex with a person who's not quite right for you, just imagine having that experience with someone with whom you connect on every level. Yes, it's out there.

9. Yes: You want a good relationship, not a random partner in crime.

You want to be with them because they are who they are, not for any other reason. It really comes down to priorities. We get involved with people for a million reasons — some prudent, some less so. It's totally legit that sometimes you just fall in love with someone, and love them a lot and really want to make it work, but it doesn't ultimately gel because the two of you are vastly different people and want seriously different things out of life. That is totally OK. It happens. But if your priorities are more along the lines of "I want to be with this person because they make me truly happy and vice versa," you're on the right track.

10. No: You ignore the niggling feeling in your gut that tells you this is the wrong person.

This pretty much sums it all up. When I was with the wrong person, I knew. I didn't know I knew — I agonized over the relationship often, and "didn't know what I wanted" and "cleared my head" and struggled and puzzled and questioned. But if you're doing all of that all of the time, guess what? It's wrong! I remember asking a friend how she knew her husband was right for her, and she was like, "I just know." Hate to say it, but that means that if you don't know, you probably know it's wrong. You don't have to concretely know it's wrong — just feeling like you don't know is a pretty good sign it's not working. And if that is the case, some soul-seeking is in order, because I truly believe relationships should bring joy — not constant confusion and indecision and worry and dithering.