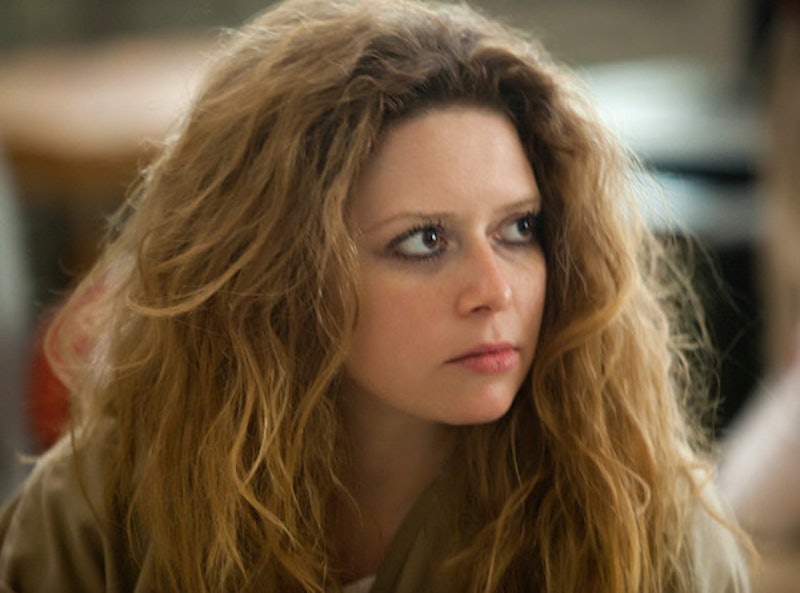 While nothing is confirmed just yet, I am operating under the assumption that Natasha Lyonne's lovable and heartbreaking addict character Nicky will be back in Orange is the New Black Season 4, because the opposite is a reality just too painful for me to contemplate. In episode three of Season 3, Nicky was hauled off to Max (that is, maximum security prison) for stashing a bag of heroin, and she was not seen again — Lyonne's name was even removed from the show's opening credits after that episode. Between Red's overwhelming sense of loss and Morello's growing loneliness as the season progressed, Nicky's absence left a big, gaping hole in the show and Litchfield itself. As much as I was interested in seeing how losing her affected those she loved, I am even more interesting in knowing what Max is doing to Nicky — something that could be a great plot for the series to tackle next season.

During flashbacks, Nicky's relentless need to get a fix were hammered home. There is nothing she wouldn't sacrifice for her next hit including her friends, her mother, and her own health. The show portrays the dark realities of struggling with an addiction exceptionally through Nicky, and it would be a huge shame if she was gone for good — not only would the show be losing an amazing actress, but it would be losing one of the characters that makes it such a significant, important television show.

However, if Nicky is indeed coming back from Max, how will she be changed? Will she return the same person she was before?

Sadly, I don't think this would be the case. Being sent to Max just confirmed what Nicky already feared about herself — she is fundamentally broken and has nothing to offer but pain. Imagining her sitting in Max feeling that she has made no progress absolutely breaks me, though, because it is so untrue. The Nicky on display in the flashbacks was completely controlled by her addictions. The Nicky in Litchfield cared about others and was willing to put herself on the line to protect them. She was a staunch supporter for so many of the women, a true friend, and a daughter to Red. She contributed to the community in ways she could not fully appreciate.

My fear is Nicky will lose all of the progress she made now that she is in Max. If she believes she deserves to be there, then she will also believe she cannot stay sober. Being locked up in a place like that could irrevocably change her, and, with none of the emotional support Litchfield offered her, it could sculpt her into a prisoner mentally and physically.

If (when, hopefully) Nicky returns, though, the show could use her character's heartbreaking storyline to examine what the broken prison system can do to a person who can be rehabilitated. In an interview with MTV, Lyonne spoke a little about what she believes could be happening to Nicky in Max. "Nicky has a lot to think about," Lyonne said in the interview. "The reality is that they’re most definitely in prison. The show is fun and everything, but it’s important that it’s really grounded by how high the stakes are. Making a mistake when there’s no one around to catch you is very different than making a mistake inside prison walls."

She also went on to say Nicky had to fight her own demons, and this gives me a small glimmer of hope. Nicky has a way of bouncing back. She has survived situations that seemed impossible and come out fighting.

I truly do believe the Nicky the show first introduced viewers to is gone for good: Her time in Max is going to fundamentally change her, but change is not synonymous with break. There is hope for Nicky yet, though — she may never be as lighthearted and playful as she was, and she may come back with more scars and a heavier heart, but if Nicky can find strength within herself the next time she is presented with the choice to get high, she might find it just a little bit easier to say no.

I hope OITNB gives us a chance to follow Nicky's journey a little bit longer. Leaving her so desolate and alone is honest, but I don't want honest in this case. I want to know Nicky pulls through because she possesses so much strength in every other area of her life. She is a survivor, and I hope her story of survival is just beginning.