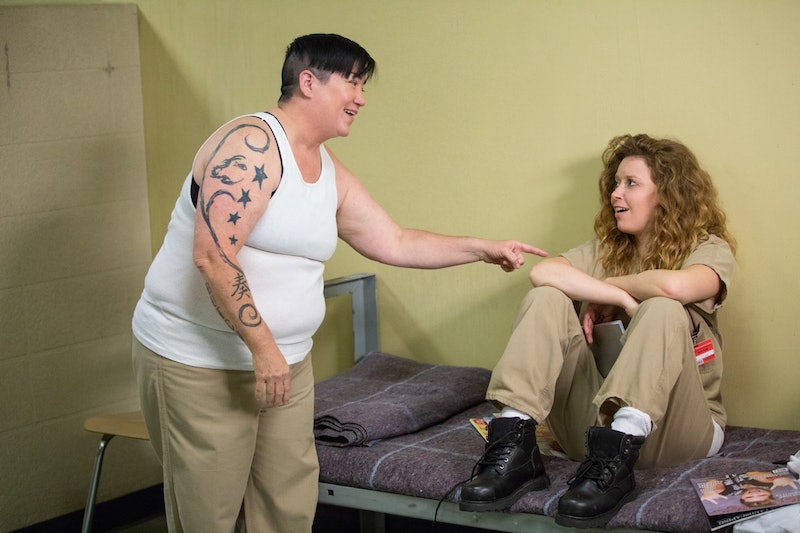 Christmas came early on Thursday evening when Netflix decided to release Orange Is the New Black Season 3 six hours earlier than expected. And because of that, many diehard fans (myself included) buckled down for a very sleepless (but highly enjoyable) night of binge-watching. Because, that's right, folks — I've already watched the entire season, proving once and for all that I have zero self control and restraint. (No judgments please!) However, just because I sprinted through these episodes at the speed of light, doesn't mean that I don't also have a few complaints. Like the fact that [Spoiler alert!] OITNB 's Nicky Nichols, played by Natasha Lyonne was MIA throughout the majority of the season, leaving many to wonder: Will Nicky be back for OITNB Season 4 or have we truly lost this beloved character forever?

Unfortunately, viewers are left with pretty much just worry and guesswork at this point. Thankfully, we already know for sure that the Litchfield-centered drama has been sentenced to a fourth season, but in regards to who specifically will be returning, it's anyone's guess right now. Obviously, our main series regulars are more than likely coming back next year, such as Piper, Suzanne, Taystee, and Red. However, given how little of a role Nicky played this season — having gotten herself shipped off to Max way back in Episode 3 — it's hard to say when or even if her character will ever return.

But, I mean, she has to, right? The series wouldn't just write off such a popular character forever… would it? So just in case Nicky's fate is on the fence, I've taken the liberty of compiling a few different ways they could write her back into the storyline. Because, much like Red and Morello, we're just not ready to say goodbye.

Red Works Her Charms On Healy

Red and Healy established a rather surprising and intimate connection this season, which served as a big part in helping Red finally get her kitchen back. What if the same tactic could be used for Nicky's return? Granted, I'm not sure Healy possesses a strong enough pull around Litchfield (especially these days) to get Nicky sent back from Max, but it's definitely not out of the realm of possibility. Never underestimate the power of feminine wiles.

It's now been established that Nicky's family isn't exactly lacking in the money department. Perhaps once they learn that she was sent to Max, they'll use the power of bribery to help her return to her previous residence over at Litchfield. They might make an offer the prison just can't refuse.

Nicky Returns On Her Own Good Merit

Maybe Nicky is so well behaved over at Max that they decide to reward her by sending her back for a second chance. Hey, you never know, right? And at this point, I'm willing to accept any reason so long as it means we get more Nicky screen time.

More like this
Everything We Know About When To Expect The Rest Of The Upshaws Season 2
By Kadin Burnett
Vecna Officially Has A Fan In 'Stranger Things' Star Jamie Campbell Bower
By Alyssa Lapid
Yes, Joseph Quinn Is Actually Playing The Guitar In This Epic 'Stranger Things' Scene
By Alyssa Lapid
Jurnee Smollett’s Heart Is Healing
By Rebecca Carroll
Get Even More From Bustle — Sign Up For The Newsletter