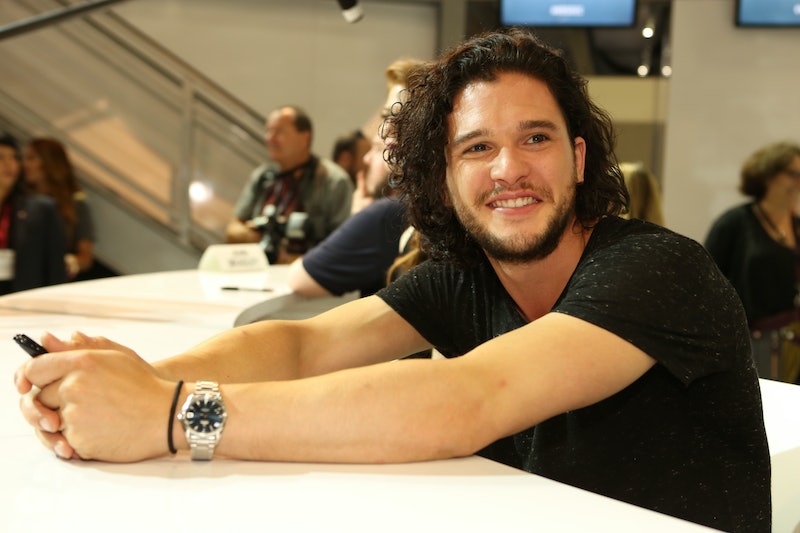 After the devastation of the Game of Thrones Season 5 finale, Kit Harington has been getting even more buzz online, if that's even possible. People want to know the answers to the all important questions: Is Jon Snow really dead? Will Melisandre bring him back to life? Will he become a White Walker? But we're not here to talk about those matters — though, for reference, the answers are yes, no, and no. We're here to talk about a much bigger issue that has been gripping the nation in the days following the GoT finale: Kit Harington's height. The problem is, no one seems to know what it actually is.

You see, Google lists Harington as 5 feet, 8 inches tall, but a photo of him with his GoT cast mates made Jezebel question this reporting, since he seemed much shorter than both Sophie Turner and Gwendoline Christie. The latter was no surprise, given that Christie is a gorgeous 6'3", but the Turner thing was indeed rather perplexing. We know that celebrities tend to give themselves a few inches when it comes to these things, but there has to be a way to figure out Harington's true height, right? Let's do some quick comparisons here.

Sophie Turner is listed on Google as being 5'9", and given that she's wearing heels in this photo, she's probably at least 6' or so with the shoes. If Harington is supposed to be 5'8", that could work, as he doesn't look more than four inches shorter than Turner here. Of course, that doesn't account for perspective. Turner is standing behind him and has one knee bent, which could reduce her height a bit, meaning that Harington is actually shorter. THE MIND BOGGLES.

Aw, man. Don't you just miss Ygritte? I sure do. Rose Leslie's height is apparently 5'6", which makes this whole thing curiouser and curiouser, because she looks pretty much the exact same height as Harington in this photo. Is she wearing heels? Perhaps, but if Harington is 5'8", her heels would only need to be two inches high to make them the same size. What heels do you know that are only two inches high? Something seems fishy...

You probably recognize Bradley more by his GoT character's name, Samwell Tarly. Bradley's height is also listed as 5'8", but while he may have looked about Harington's height in the previous photo, in this one he seems taller by at least two inches. Maddeningly, if you look at certain scenes in Game of Thrones , that height discrepancy also exists, with Bradley looking considerably taller than Harington. What does it all mean?!

Now here's a tricky one for you. Emilia Clarke is absolutely tiny at 5'2", but is wearing what look to be four inch heels in the above photo. This would put her at 5'6", and it does look like Harington has two inches on her. But wait! Look at his shoes. Motorcycle boots, which likely have at least an inch heel.

So, how tall is Kit Harington? Something tells me we may never know, but my guess is about 5'6", tops.