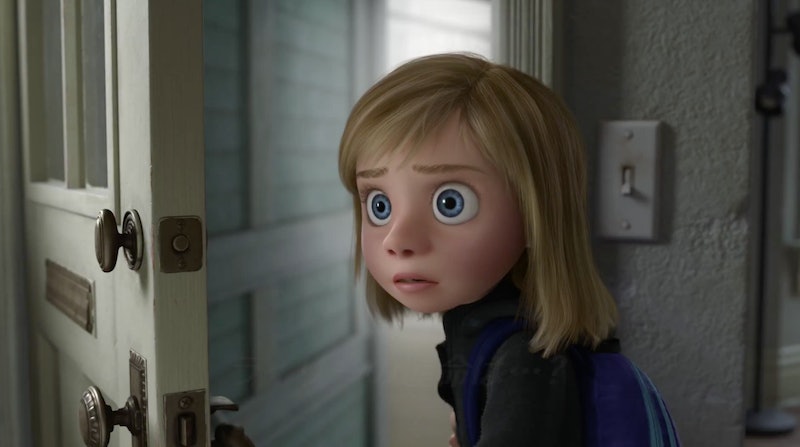 The most passionate among the various people who consider themselves Pixar fans are those holding dear to the supreme status of the Toy Story trilogy. More devoted to this, their personal favorite, than even the pro-Incredibles lot or the Ratatouille fans, Toy Story people pride their pick as not only a great set of films, but a set of films virtually synonymous with the experience of growing up. They’re not likely to take kindly to mention of a Toy Story 4, and even less so to admit to that an independent Pixar venture is better than their darling. Daringly enough, Inside Out plays both roles. Introducing a world all its own — that within the brain of 1 -year old Riley Anderson, a realm living under the cautious and loving watch of her emotional compass, Joy — Pixar's latest film Inside Out returns to the very themes taught by the final chapter of the Toy Story tale. And, appropriately, the themes seem to have grown up along with us.

When Woody whispered his valedictory “So long, partner” to lifelong companion Andy at the close of Toy Story 3, there wasn’t a dry eye among the collective audience of American twentysomethings. Having weathered the years alongside the Toy Story movies, we who consider ourselves milennials decreed that Toy Story was actually about all of us. Such arrogance is completely uncharacteristic, of course.

Toy Story is about our endurance of the changes inherent to growing up. From the favor of a new toy over an old, to the ultimate goodbye we’re made to bid to childhood. Though not especially unique, the 15 years bracing life between the Sheriff’s first showdown with One-Eyed Bart and that final ride on the shoulders of his favorite deputy were ours, rightful to claim with preciousness, and to validate through an illustration as special as Toy Story’s.

But a fact we so willingly dismissed in our claim of ownership was that Andy was not the hero of Toy Story. As genuine as his arc may be, it wasn’t his to which we had attached throughout the three pictures. What we really endured was Woody’s experience watching Andy grow up, and, as a result, Woody’s experience growing up in his own right.

The theme is consistent among Pixar’s stronger pictures. In Monsters, Inc., carefree workhorse Sully finds himself challenged by the shift in values innate to new parenthood. Finding Nemo, perhaps the most obvious expression of the theme, sees single father Marlin struggle with the fear of loosening his grasp on his impossibly valuable only child. Interestingly, neither of these movies operates with the same empathy that the Toy Story afforded Woody.

Monsters, Inc., a few leagues goofier than its studio brethren — more Tex Avery than Walt Disney — operates from the perspective of clown Mike Wazowski, stilted in youth and struggling to digest his longtime pal’s changes of heart. Finding Nemo, afforded through its great whimsy a spirit even more childlike than that seen in fellow Pixar films, likely touches its younger league of viewers through the eyes of Nemo himself: experiencing the world anew, fears and excitements altogether.

But 14 years after Monsters, Inc., 12 after Finding Nemo, and just five after our deliberate rearrangement of ethos in the Toy Story canon, we get what Pixar has really been working its way up to: Inside Out. A movie that plants its characters and viewers right inside the mind of an 11-year-old girl — one only first learning about the inevitable sadness that comes along with growing up. As we join young Riley in discovering new anxieties, apprehensions, and doubts, we’re ushered back to our own pilgrimage into the emotional calamity of teenhood, and beyond. Her story, like Andy’s, is bitterly, though invitingly, familiar.

And like Andy’s, hers isn’t the story we’re really being told. Inside Riley’s mind is Joy, holding dear to the variant of the girl she has known and protected for more than a decade. Joy keeps sadness (courtesy of her colleague, Sadness) at bay, wanting Riley to only and always know her own kind touch. Joy has as much to learn as Riley about the unavoidability of changes, good and bad alike, along the path of growth. As we experience this along with Joy, we see Pixar open up to a story it’s been building to for decades: Inside Out is that Monsters, Inc. sequel about Sully watching Boo grow up, or the version of Finding Nemo that its target viewers’ parents likely took in. Maybe even the take on Toy Story 3 many of us missed out on the first time.

But in truth, it wasn’t Toy Story 3 that mixed up the delivery of its ultimate message, but an Andy generation not yet ready to accept the inevitability of becoming Woody. We won’t always be the ones stepping into new pastures; we will, if all goes according to plan, become those who watch the boys who played with us set off to college, or step aside as the girls in whose minds we’ve resided give way to feelings we can’t control. Though only five years out from that wistful “So long, partner,” maybe we’re all finally ready to look at these movies from the other perspective they offer — to deal in the pains and beauties of having to say goodbyes all over again. After all, it’s important to stay tethered to our Andys, our Boos, our Nemos, and our Rileys; as Inside Out reminds us, even when you’re not the one growing up, there’s still a lot of growing to do.

More like this
A 'Bridgerton' Star Just Dropped A Major Hint About Joining The Live-Action Barbie Cast
By Bustle UK
'Stranger Things' Star Joe Keery Is Dating An "Indie Scream Queen"
By S. Atkinson and Grace Wehniainen
Laura Dern Said “Cultural Awareness” Made Her Rethink This 'Jurassic Park' Fact
By Grace Wehniainen
The 'Hocus Pocus' Sequel Finally Has A Release Date & It Makes Total Sense
By Shannon Barbour and Radhika Menon
Get Even More From Bustle — Sign Up For The Newsletter