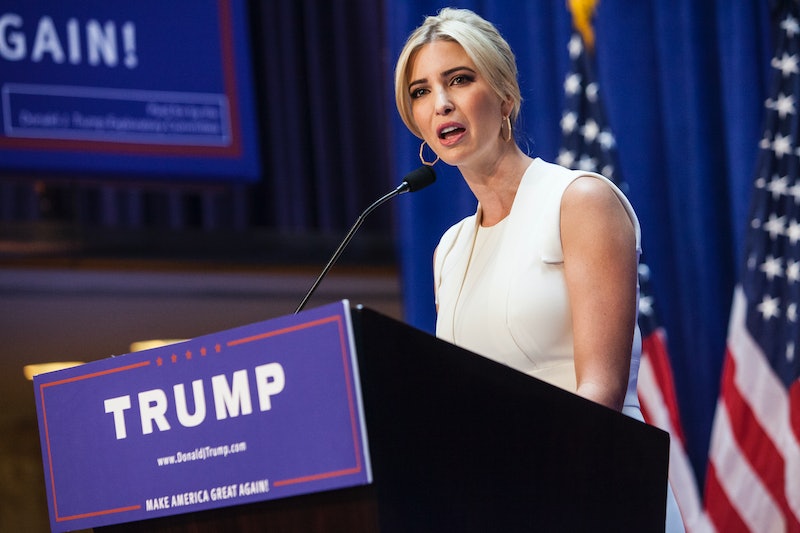 Move over, Donald. We all know who this election should really be about & it's definitely Ivanka. The daughter of now-candidate Donald Trump and his first wife, Ivana, Ivanka Trump is a force to be reckoned with. She's a smart, savvy businesswoman in her own right — and I'm pretty sure she could build a wall just as well as her father. Add to that her connection to women's issues and I'm all but convinced that we'd rather see Ivanka run for president than the Donald.

First, some background: Ivanka is the second of Donald and Ivana's three children. She works with her father and her two brothers at The Trump Organization, where she serves as the executive vice president of development and acquisitions. Before joining the family business, Ivanka worked as a model and a jewelry designer. In 2009, she married Jared Kushner, a real-estate mogul and owner of The New York Observer. Together, they have two children: Arabella, 3, and Joseph, 1.

Don't be fooled by her privileged background: Ivanka has brains and ambition all her own (and she might even have better hair than her father). And since she's (sadly) not running herself, she could be Donald's greatest ally as his campaign moves forward. Here's why:

In fact, Ivanka told Forbes in 2010 that she's gotten used to being underestimated. Like a natural in the professional world, she uses that to her advantage.

I never mind when somebody underestimates me. It often means they are not well prepared. I joke about this with my father all the time. If somebody has a meeting with Donald Trump, they will come in fully armed and fully prepared, whereas if they have a meeting with me, they are less likely to be prepared, which is an advantage for me. It is always better to know more than the person you are speaking with.

2. She Has Her Own Ideas

Ivanka unwaveringly supports her father, but she's not afraid to do her own thing every now and then. In 2013, she told Forbes that she manages to find a balance when it comes to her father.

I support him because he's my father, and I will always go to the mat for him. But I don't always agree with everything he says.

As a young professional, she didn't join the family business right away. She went to work for Forest City Enterprises, a real-estate management and development company, for a year before later joining The Trump Organization. Beyond her family's organization, she has started a successful fashion company that bears her own name. Ivanka Trump as a company produces lines of shoes, handbags, jewelry, fragrances, apparel, and more for retailers like Nordstrom and Bloomingdale's.

3. She Can Relate To Women In The Workplace

Ivanka is already a powerful role model for women, and as president, we're sure she'd be an even greater advocate. Through her website, IvankaTrump.com, she has launched an initiative called #WomenWhoWork. Through it, she hopes to modernize the idea of the working woman and empower women of all professional levels and backgrounds to share their stories.

She can also relate to working moms. Her success shows that women shouldn't necessarily have to choose between raising a family and succeeding in the workplace. (Plus, her sound byte on modern motherhood in this interview with Racked came out much better than Rick Santorum's.)

On a basic level, all moms are working moms. I'm more exhausted on a Monday morning after a weekend with the kids than I am on a Friday afternoon after an intense week at the office. All women are working hard at their lives and whatever path that takes them down.

Since 2010, Ivanka has used her fashion brand to advance the empowerment of young girls across the country. She has worked with the United Nations' Girl Up campaign, by donating proceeds from her sales and designing exclusive pieces to raise money for the movement. In 2014, the U.N. honored Ivanka for her work at its Global Leadership Dinner.

American girls are the new global entrepreneurs and the faces of philanthropy. I am very proud to be a Girl Up champion.

5. She's Got Her Father's Endorsement

An endorsement from Donald might not actually hold any political water, but we're taking it as a clue that she might be able to influence him along the campaign trail. In 2011, when he tossed around the idea of running for the 2012 election, Donald told Harper's Bazaar that his daughter would be "a huge asset" on his quest for the White House.

There's never been anybody like Ivanka in the White House. I think she'd be an amazing addition.

As her father attempts to run for president, Ivanka will be by his side (and hopefully, in front of the microphone again, as well). Unfortunately, Ivanka has said that she has no interest in holding public office. Plus, at just 33 years old, she's too young for the job. Maybe I'll just have to write her in.

More like this
Christina Aguilera Took A Powerful Stand At Brighton Pride
By Sam Ramsden
Are John Legend & Kanye West Still Friends? The Singer’s Latest Update Is Candid
By Brad Witter
Beyoncé & Madonna’s “Break My Soul” Remix Honors A Group Of Black Icons
By Stephanie Topacio Long
'Scream’s Courteney Cox Has Broken A Major Horror Record
By Sophie McEvoy
Get Even More From Bustle — Sign Up For The Newsletter