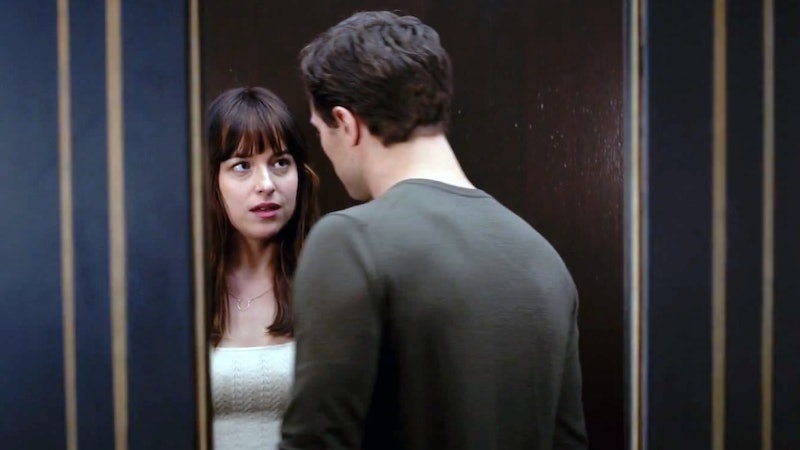 Look out, book world, there's a brand new Fifty Shades of Grey book: Grey by E.L. James, one that fans have been eagerly anticipating. But while the new book, which retells the first book in the Fifty Shades trilogy from Christian's perspective, is very faithful to the original, there are some things that are different — which is only to be expected. No two people ever remember the same thing the same way, so it only makes sense that reading some scenes in the new book would be totally different than reading them in the first.

Plot-wise, the two books are the same — even the dialogue remains unchanged. There are lots of new scenes from Christian's life, times when he's talking to his family or running his company when Ana's not around that we obviously didn't see in the first book, which was told from Ana's perspective. However, in the scenes that Christian shares with Ana, he often has a very different view of what's going on, and that makes the experience of reading them very different. (It also makes it even more clear that Christian's manipulative, coercive, stalker-ish behavior really is very disturbing.)

So what scenes are we talking about? Well, here are 6 scenes that are very different to read in Grey than they were in Fifty Shades of Grey .

When Christian and Ana Meet

In the original novels, there is an instant attraction between Christian and Ana, and she is immediately smitten, though she tries to deny it. In Grey, the attraction is still there, but Christian is far more ambivalent about Ana. He finds her intriguing at times, irritating at others, and is left wanting to know more about her, but it isn't the same "love at first sight" feeling that you get from the original.

Both Ana and Christian are way more focused on each other during Ana's graduation ceremony that they are on actually graduating or delivering their commencement address, respectively. But from Christian's point of view, we get to actually hear his conversation with her father and see Ana's family and friends through his eyes.

In the first book, it seems like when Christian shows up during Ana's vacation to visit her mother in Georgia, he'd tracked her down to the bar and butted into her mother/daughter night out on purpose. But in Grey we find out that Christian wound up in the same bar totally by accident... after flying clear across the country to see her without asking if it was OK. But still, the fact he really didn't mean to crash her evening makes it less weird.

There is nothing that will make trying to finger your girlfriend at the same table as your parents not weird. And in fact, seeing the scene from Christian's perspective makes it only more weird. He basically decides that his family is being boring and so the best way to entertain himself is to stick his hand in Ana's lap. And the fact that he genuinely doesn't get why she wouldn't be into that is weird. I mean, I'm not saying the whole thing isn't hot, but that doesn't make it less weird.

For the record, I'm calling it a rape scene because Ana withdraws consent, and Christian ignores it, and that makes it assault. And we can all debate for the rest of time whether or not it's good or bad or irrelevant if erotic novels include nonconsensual sex, but that doesn't change the fact that many do. However, whether E.L. James realized that the scene, which ends with Ana crying, is messed up or whether it's just that Christian perceives it very differently (neither he nor Ana label it as assault for what it's worth), the scene reads very differently. Ana still withdraws consent so it's still pretty messed up. Possibly because we don't see the emotional fallout after Ana is alone again or maybe because Christian really thinks he what he does is OK — either of these could be why the scene feels very different.