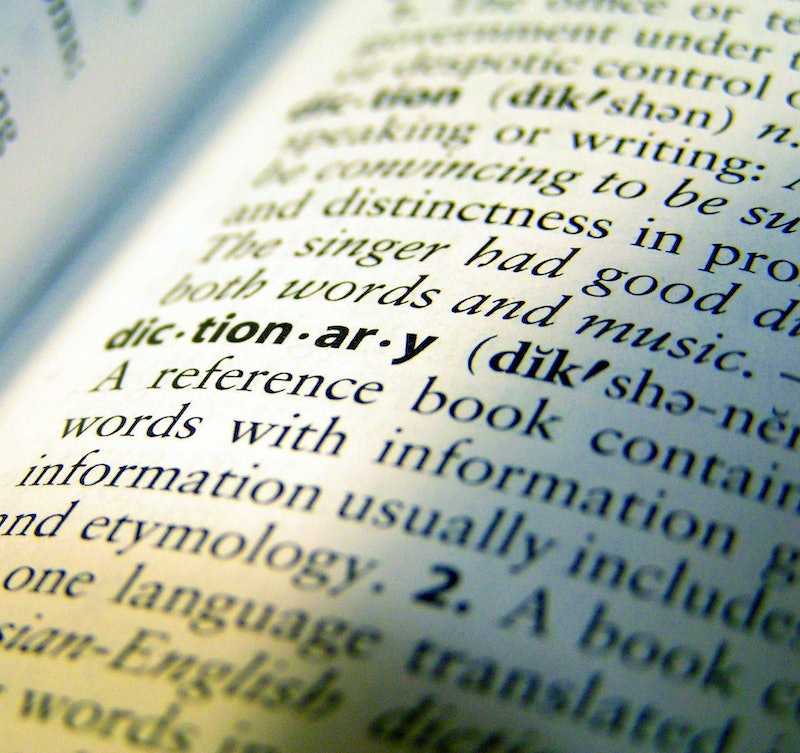 Reading the new Fifty Shades of Grey book should be really easy. It’s totally light read, right? You wouldn’t think that someone like me, who holds two degrees in Journalism and English Literature, wouldn't be running to her dictionary every dozen pages or so. But I’m shocked to admit that’s just what the new bestseller had me doing. For someone who prides herself in having a large vocabulary, E.L. has me humbled. Or maybe I should say chastened? What about sheepish or crestfallen?

At any rate, there are some seriously tricky words in this book, and I was entirely unprepared (caught off guard, or vulnerable) for that development. When’s the last time you heard someone described as a polymath? Or asked if they inspired profligate desires in you? Christian Grey has a more formal vocabulary than Mr. Darcy, Mr. Rochester, and Angel Clare combined. Seriously, who talks like this? Not even the men in my dreams!

A rose by any other name would be much harder to say, but I have to admit I admire Christian Grey’s sizable… "vocabulary." But unless you’re Ana Steele, recent college graduate and ardent devourer (consumer or enjoyer) of classic literature like Tess of the D’Ubervilles or Jude the Obscure , you’re unlikely to be able to follow along easily. So, here’s a custom (made-to-order or specialized) dictionary of eight words and phrases, explained just for us Grey fans who want to get turned on without turning to a thesaurus.

Hopefully they'll get you stupefied with jouissance. (Hey, his kinds of words, not mine.)

1. A person of great learning in several fields of study.

You’ll see it when: Christian Grey describes his father, Carrick Grey, an educated, well-read man of many talents.

You’ll see it when: Well, mostly you’ll see it throughout the entire book. Christian uses this word to describe Ana a lot. Like, a lot a lot.

You’ll see it when: Ana gently chides Christian for getting too much food.

“I didn’t know what you liked so I ordered a selection from the breakfast menu.”“That’s very profligate of you.”

You’ll see it when: Christian is reflecting on how awkward Ana can be at times. She’s as maladroit as she is beguiling, apparently.

“For all her maladroitness, she has a beautiful neckline, one that I’d like to kiss from the bottom of her ear right down to her shoulder.”

1. Of or like a mule, as being very stubborn, obstinate, or intractable.

You’ll see it when: Ana pushes back against an edict of Christian’s. Usually when he’s being overbearing and she has every right to be a little stubborn.

“I glare at her. Don’t push me on this, Ana. She gives me a mulish look and starts to eat.”

1. Acuteness of mental discernment and soundness of judgment.

You’ll see it when: Ana and Christian are having one of their famous tête-a-têtes via email. In this case, just after she calls him a “stalker” and “the ultimate consumer.”

“From: Christian Grey Subject: Sagacity from One So Young”

You’ll see it when: Ana is in Georgia and Christian is checking to make sure she’s eating enough. She jokes that she’s only a light eater around him because he puts her off her food and he replies that he’d hoped he’d inspired something else... At least this time she calls him out on his obvious use of the thesaurus.

“I’m sorry to hear that I put you off your food. I thought I had more of a concupiscent effect on you. That has been my experience, and most pleasurable it has been, too.”

8. Bringing My Errant Body To HeelA double whammy — “Errant” is an adjective, while “To heel” is an idiom

Errant: 1. Deviating from the regular or proper course; erring; straying. To heel: 1. Under control or discipline, this expression alludes to controlling a dog by training it to follow at one’s heels.

You’ll see it when: Ana is testing the limits of Christian’s patience, as she so often does.

“Bringing my errant body to heel, I press send on my reply, and wait.”

Hopefully this article has been some sort of help to those of us not blessed with large enough vocabularies or an obsession with Thomas Hardy. Just remember, if the guy you like starts using words you have to look up to define, you might check his back pocket for either a thesaurus or a riding crop... or both.

More like this
16 Novels That Paint A Realistic Portrait Of Abortion
By K.W. Colyard
Annie Lord’s Memoir Will Make You Believe In Love Again
By Shahed Ezaydi
Ottessa Moshfegh Is Happy To Be Your “It” Girl
By Arya Roshanian
10 Must-Read New Books Out This Week
By K.W. Colyard
Get Even More From Bustle — Sign Up For The Newsletter