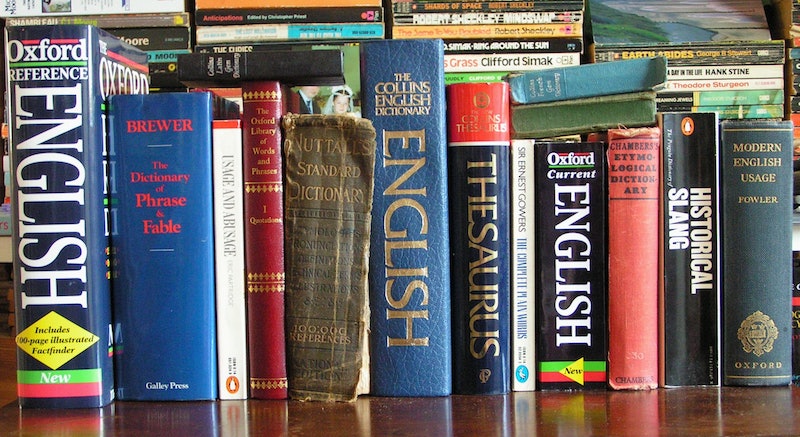 Ever feel like you just can’t find the right words? Or maybe you have no trouble finding the right words, but wish you could just use one single word instead of having to say a whole phrase. Well, with lots of thanks to Latin — and even more thanks to all the modern languages from which English gratuitously steals — the good ol’ English dictionary just might be able to solve, like, 99 percent of your vocabulary woes.

A little vocab can go a long way in so many situations, like winning an argument easily because the other person basically just doesn’t know half of the words you used. Or impressing during an interview when you say you’re “fastidious” in your job interview instead of “I show great attention to detail” or other way too commonly used answers to the inevitable "what are your strengths?” question.

Sure, I mean, you don’t always need to fancy things up. “I’m hungry” is probably always going to be a better choice than “I’m esurient” unless you've actually time-travelled from the 1700s. (In which case, we need to chat.) But there are times when even the occasional archaic word is exactly perfect for what you need to say. Here are a few words you didn’t even know you needed in your everyday life — but, trust me, you absolutely do.

To Describe Your Career Goals (aka That Hustle)

sinecure (n): “a job or position in which someone is paid to do little or no work”

Back in the 17th century, sinecure used to specifically refer to a position with the church in which you took care of the souls of the parishioners, but over time the word came to mean a job where you could get paid without doing much work at all. I think today most of us just call that a “consultant…” But, come on, you’ve got to admit you’d be lying if all that work you’re doing now wasn’t so that you can eventually nab yourself that sinecure later.

For That Hour Right Before Your Lunch Hour

...or right after. Either way, we’ve all had that awkward moment in the middle of an awkward silence when your stomach decides to fill the space with its own gurgly thoughts on maximizing company synergy or whatever that horrible meeting keeping you from your Subway footlong is about. Sure, knowing the word for it won’t save you from the embarrassment, but at least now you can apologize eloquently: “Please forgive my borborygmus. My stomach is merely expressing its displeasure at being denied its Wednesday shwarma.”

For When You Kinda Want to Go Out, But Can’t Fathom Putting on Pants

velleity (n): “A wish or inclination not strong enough to lead to action”

You know what I’m talking about. Your new friend just texted you about that party you told her two days ago that you’d definitely be at, but now it’s Friday and you have two episodes of Scandal to catch up on, a bottle of wine seducing you from your fridge, and… welp, you already took off your pants. You really did want to go to the party, but between the invite and today, that wish has become a velleity, because pants, dude… pants.

For Your Partner's Best Feature

So there’s a statue of Aphrodite called the Venus Callipyge, and it’s kind of known for (and named after) Aphrodite’s really nice butt. So next time you wanna give your boo piece a solid compliment and “nice butt” just seems too crude, try comparing his or her tush to the most famously amazing tush in history.

For When You Totally Butcher the Lyrics to That Song

mondegreen (n): “a word or phrase that results from a mishearing of something said or sung”

It’s OK, we all loudly sang “lonely Starbucks lovers” in that one line in “Blank Space,” naturally whilst pretending you aren’t a total Swifty. And you know that if you had a dime for every lyric you butchered over the decades, you probably wouldn’t have student loans. Turns out “lonely Starbucks lovers” is a mondegreen for “long list of ex-lovers.” To be honest, the mondegreen is kind of better than the original (and definitely more accurate for some of our love lives amiright?).

To Explain Why You Have SO Many Cat Pictures

zoolatry (n): the worship of animals

If an alien species millions of years from now managed to recover Internet data from our age, they’d pretty much have to come to the conclusion that we worshipped cats. We literally buy them little pedestals. We provide them with all the little kitty drugs they could ever want, and we document their every flick of the tail with Instagram photos and YouTube videos that get millions of views… If that’s not worship, I don’t know what is.

To Explain Why You’re So Bad at Social Media

opsimath (n): a person who begins to learn or study late in life

If you were born before the '90s, you probably have no idea how to make your own .gif and you’re probably still trying to figure out what “IDGAF” means. But that’s OK — all those youngins had a head start. You, you’re just an opsimath, figuring out all the SMHs and FTWs along the way (definitely thought that meant “f*ck the world” for the longest time. Made for some seriously confusing Facebook convos...).

For Your Annual Review

floccinaucinihilipilification (n): “The action or habit of estimating something as worthless.”

Go ahead. Try to say it again… Yeah, whatever you said is probably not right. But master this word and you can probably give up learning any more words for ever. Say this word (without sounding like a drunk Zoidberg) in your annual review after your boss tells you your productivity has been subpar, and you’ll probably be promoted (or defibrillated [yup, I verbed that] after they assume you’re having a stroke). But, seriously, how badass would you sound saying, “Well, boss, I think your floccinaucinihilipilification of your employees interferes with your seeing just how productive I have been.” OK... that took way too long to type that word out correctly.

How You Can Describe This Article When You Tweet About It (Which, Duh, You Should)

sesquipedalian (adj): “given to or characterized by the use of long words”

We’ve all got that friend or coworker who just loves throwing out long words to confuse everyone in the room. After reading this article maybe you can be that girl in your friend circle… and then you can tell everyone exactly how you became so sesquipedalian.