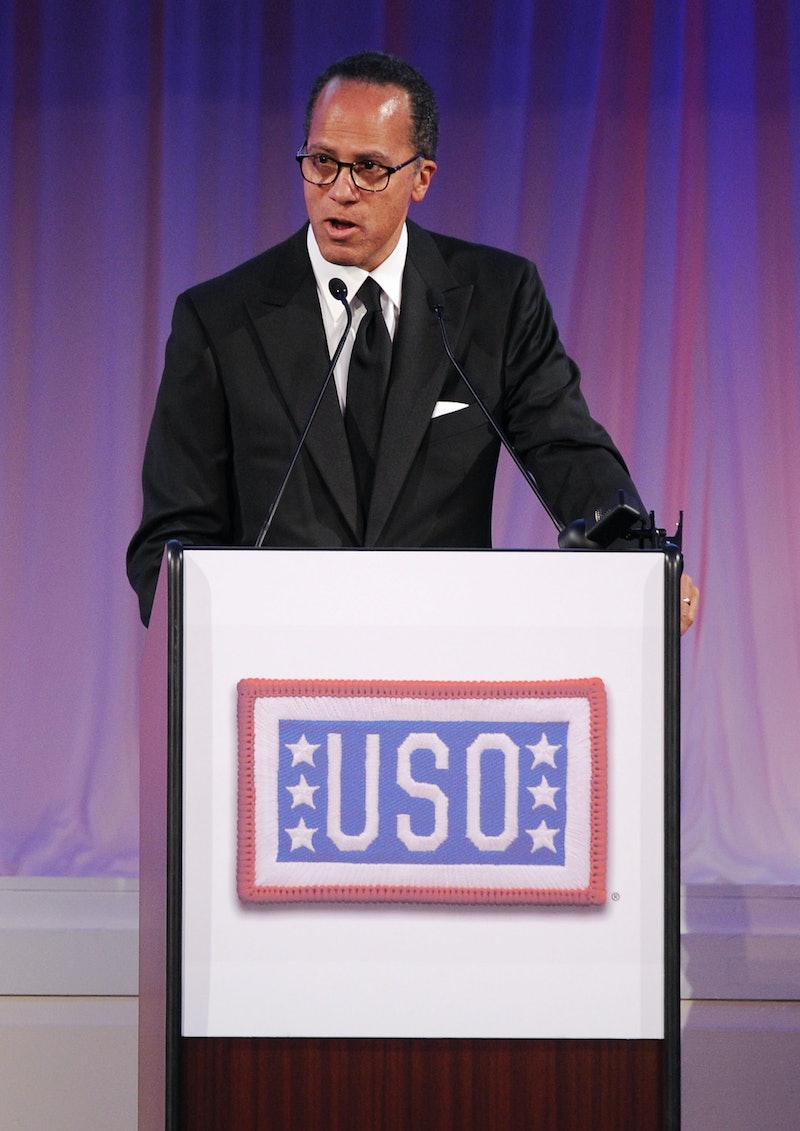 The dust has finally settled over at NBC, and decisions have been made. After damaging reports surfaced that Brian Williams exaggerated information about his experience reporting in the Iraq war, he was immediately suspended as anchor. After four months, they have decided that Brian Williams will anchor breaking news at MSNBC. Meanwhile, NBC announced that Lester Holt has been named the replacement head anchor. This makes him the first African-American to solo anchor an evening newscast on NBC, ABC, or CBS in all three networks' history. It's exciting, historic, and wonderful for Holt, who has been doing a fantastic job filling in for Williams throughout this entire ordeal. He has absolutely earned this position, and I think he'll do great.

At the same time, this historic move does open doors not just for men of color, like Holt, but for women of color as well. While we've had female solo anchors on the air, and on network television in the past, Holt is the first African-American ever. That means women of color are the next natural step for networks to take when a new anchor position opens up in primetime, or even late night, news. The lack of women of color as solo anchors is the one common feature that unites all networks, from the powerhouse cable channels like HBO to the smaller shows on Comedy Central. Holt taking over the Nightly News is a huge step in the right direction for diversity in the news, but this can't be the only step that's taken.

While we're all busy throwing parties in the streets to celebrate Holt's landmark promotion (I know I can't be the only one), here are seven women of color that networks should keep in mind next time there's such a historic position to fill.

Caruso-Cabrera is CNBC's Chief International Correspondent, and has hosted and co-hosted numerous programs in her day. Although she's primarily a reporter, it's not as though she's lacking in the knowledge required to turn her reporting job into an anchoring position should a broadcast network have an evening news show in need of a woman of color. Whether or not Caruso-Cabrera is interested in anchoring again, let alone a primetime news program on broadcast TV, is up in the air, but, hopefully, she will one day be in consideration by the networks

You must have seen this coming. Williams has covered hard-hitting news human interest and feminist stories from comedic angle, but, considering she makes her home on The Daily Show, it won't be hard for her to transition from comedy to straight-forward news anchoring. She can be entertaining and make jokes while still reporting the facts, after all. Though Williams said she was not in consideration to host The Daily Show because of her age and her temper, it might be a few years yet before a solo evening news anchor position opens up on a broadcast network — at which point she might feel like she's ready for a more serious job.

Liu already works as a news anchor for Bloomberg Television, and even anchored a show called In the Loop with Betty Liu . With that kind of experience, it's a wonder that no one has followed up on the any openings in her schedule by giving her an evening solo news position yet. When it comes to solo anchoring — especially on a broadcast network — the job is more likely to go to someone who has proven themselves as a person that other people want to watch, and that other people trust as a source of news. Liu proves herself as both basically every single day.

Hall might be best known to people as a staple of the morning shows than as a primetime news anchor — although she currently works as an NBC national correspondent, even hosting her own show called NewsNation with Tamron Hall. While hosting is a gig that few would give up, given how much of your own personality you get to interject into the news, I think Hall has the experience and the knowledge required to make a great primetime anchor as well. Broadcast networks should take heed here.

O'Brien has an incredibly busy career, between being the chairman of Starfish Media Group, being a philanthropist, and being a journalist. Anchoring her own evening news show on a broadcast network might not be something she even has time for right now, but she has never been a woman who backed down from a challenge. She has anchored and co-anchored everything from weekend news segments to morning shows, so I'm sure she'd be more than capable of handing a primetime news show of her very own if only the networks would offer her one.

Luring Roberts away from ABC and Good Morning America might be a tall order, but news anchors hop channels all the time, so it's not like it would be unusual. Roberts is a co-anchor on the morning show, and a pop culture staple, as evidence by her recent cameo in Elizabeth Banks' Pitch Perfect 2. It would be great to see Roberts drop the co- from her job title, and rise to become the sole anchor of her own evening news show in the future. Switching from morning to evenings will be a breeze for a woman so difficult to ruffle.

At the end of the day, Holt's landmark promotion has opened the door. Now all these ladies — and any other women of color who might be interested in becoming a solo news anchor — have to do is be allowed to walk through it.

More like this
5 Ways To Stand In Solidarity With Women In America From The UK
By Sophie McEvoy
How To Fight For Reproductive Rights, Based On How Much Time You Have
By Courtney Young
The 'Hocus Pocus' Sequel Finally Has A Release Date & It Makes Total Sense
By Shannon Barbour and Radhika Menon
Jurnee Smollett’s Heart Is Healing
By Rebecca Carroll
Get Even More From Bustle — Sign Up For The Newsletter