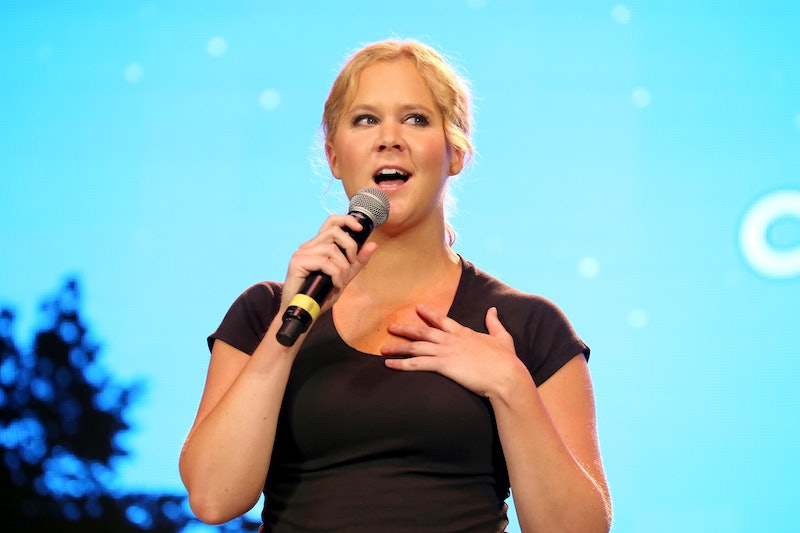 I'm delighted that we now live in a world where love of Amy Schumer is so universal, but it wasn't always like that. Some people think that Schumer is a newcomer to the game, because they just caught on to the genius factory that is her show Inside Amy Schumer , but she's actually been here a while, grinding away at her stand-up and putting in the kind of hard work it takes to get yourself seen and heard in the comedy community! So while it's great we're all jumping aboard for her particular brand of un-self-conscious, delightfully vulgar humor, I want to also give a shout-out to where this lady came from, because she's one of the hardest-working people in the business.

Schumer has been performing probably since day one, but she says she first realized she was funny at age five, during a performance of The Sound of Music , in which she played Gretel. Then we got our first glimpse of her in 1992, when she was an extra in the Disney live-action musical Newsies, starring a baby-faced Christian Bale (I KNOW), but it wasn't until 12 years after that when she first tried her hand at stand-up. On June 1, 2004, she did her first-ever set at Gotham Comedy Club, and just three years after that, in 2007, she was appearing on Season 5 of Last Comic Standing, where she placed fourth overall.

Schumer said later that she was pretty sure her appearance on the show was going to be her big break, but it wasn't. As recently as 2011, during The Roast of Charlie Sheen, Seth MacFarlane straight-facedly said this about her, by way of introduction: "What can I say about Amy Schumer? I actually mean that sincerely; I've never heard of this woman." Woof.

So if one thing is clear, it's that we all needed Schumer's titanic talent shoved down our throats quite a bit before we caught on. (Feel like she'd really appreciate that analogy, someone please tell her about it.) Never one to sit around and wait to be discovered, Schumer filled her time with film appearances, TV show cameos, a comedy album, and her own Comedy Central special while most of us kept walking around with our heads up our asses about how absurdly talented she was.

And then finally, in 2012, she finally did the thing that brought her to most of our attention — she started writing a sketch show. Schumer has such a unique, unapologetic voice that there really weren't any opportunities out there to highlight her abilities, so she made her own. She pitched Inside Amy Schumer to Comedy Central as a series of vignettes starring a heightened version of herself tied together with her own stand-up throughout. And luckily for us, they very intelligently snapped it up, and we've been adoring it, and Schumer, ever since.

So I'm pretty sure the moral of the story here is don't stop, never give up, and this lady's a hero. Thanks for everything, Amy Schumer! Here's to many more years of jokes about sex stuff!

More like this
Amy Schumer Is Actually The Other Kardashian Sister You Never Knew About
By Jake Viswanath
50 Years After Creating Her Alter Ego, Angelyne Is Still Driving That Pink Convertible
By Gretchen Smail
Jennifer Aniston Joked About Ending 'Friends' With Therapy & Divorce
By Grace Wehniainen
The Grey's Anatomy Season 18 Finale Finally Revealed If Japril Got Back Together
By Brad Witter
Get Even More From Bustle — Sign Up For The Newsletter