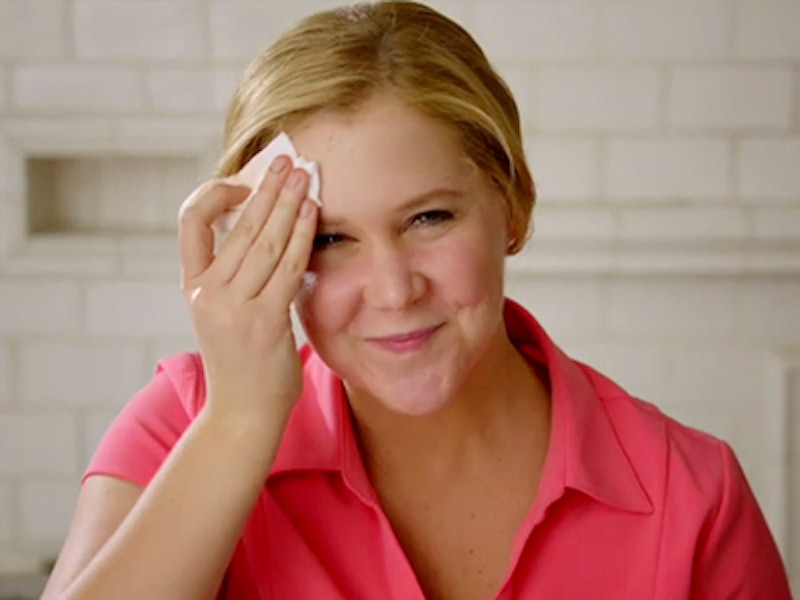 As far as current leaders of comedy go, Amy Schumer has been reigning supreme. After her razor-sharp standup skills led to the development of the wildly successful Inside Amy Schumer — along with an impressive big-screen debut in Trainwreck —Schumer has been a female at the helm of challenging current dialogue, and eschewing convention when it comes to unrealistic beauty standards. An entire episode from Season 3 of IAS, "12 Angry Jurors Inside Amy Schumer," shed light on the double standards placed on women in Hollywood in regard to appearance, as 12 male jurors agonize over a verdict of whether or not "Schumer is hot enough for television." The verdict reached is twofold: yes, Schumer is most definitely "hot enough" for television, and a question of someone's hotness (which is entirely subjective, by the way) is and should be irrelevant when it comes time to decide which talents are going to be gracing the silver screen.

Spreading messages of self-love and biting back against derogation and unrealistic standards are old hat for Schumer — she's been showcasing her kick-butt feminist views and confidence since her early days as a standup comedian. Let's take a look at seven IAS sketches where Schumer used her comedic prowess as a vehicle to challenge beauty standards in the most amazing of ways.

When Schumer happens upon three of her idols — the inimitably talented Patricia Arquette, Julia Louis-Dreyfus, and Tina Fey — she is both thrilled to meet them and to be invited to join them at their picnic table. "Is it someone's birthday?" Schumer beams, at which point she learns the ladies are celebrating Louis-Dreyfus' "last f**kable day." The sketch hilariously hones in on the fallacious standard perpetuated in Hollywood (and...well...in general society) that the moment a woman exits her 30s, she is on the fast track to losing her sexual appeal. To further bite back at double standards, the ladies also "enlighten" Schumer to the fact that men don't have a "last f**kable" day — case in point: Jack Nicholson. For the record, the old cliche "age is nothing but a number" reigns true, and age most assuredly does not dictate one's ability to be f**kable.

When Schumer is approached by four One Direction lookalikes crooning, "girl you don't need makeup" and "you're perfect when you wake up," she happily obliges by wiping her face clean. She isn't able to beam sans makeup for long, as the boys quickly retract their initial messages of self-love by instructing she immediately put on makeup: "lots and lots of makeup." The sketch is both comedic and deft in its message about the hypocrisy of the "no makeup look" trend, which involves — you guessed it — wearing makeup.

When Schumer gets a text asking if she's "DTF," she immediately goes into sex prep overdrive by: frantically booking a pedicure; getting her hair done, and quitting her job in favor of getting various waxes. After an onslaught of other preparations, the booty call comes-a-knocking, but Schumer ends up hiding under her bed after being inundated by thoughts of various headlines she's spent the day reading, including: "He's Here and You're DISGUSTING!" Beauty standards and expectations for women are astronomical and unwarranted, and Schumer once again showcases the message in a bitingly witty, tongue-in-check way.

Schumer goes shopping at a store for outfits that she can't wear until she obtains a "new body." Throughout the sketch, Schumer and a saleswoman discuss extreme dieting measures she can take in order to achieve her unrealistic — and unnecessary — expectations.

In this hilarious sketch, Schumer and her friends can't accept compliments without harshly ridiculing themselves, with responses like: "I'm like a size 100 now" and "I'm like 1,000 years old." The minute one woman responds with an appropriate "thank you!" all hell breaks loose.

Schumer meets with a nutritionist, who offers various "diets" that basically consist of not eating anything. For example, the "Instagram diet" instructs dieters to: "order whatever you want, take a picture of it, post it, and throw it in the garbage." To cap things off, Schumer and her nutritionist are greeted by "the new bond girl," who is played by a plastic skeleton.

Schumer is literally invisible to so-called "perfect people" in this sketch about a plain clothes detective in Miami. Once again, Schumer is able to utilize her humor as a vehicle for showing the disproportionate treatment of individuals based on looks.