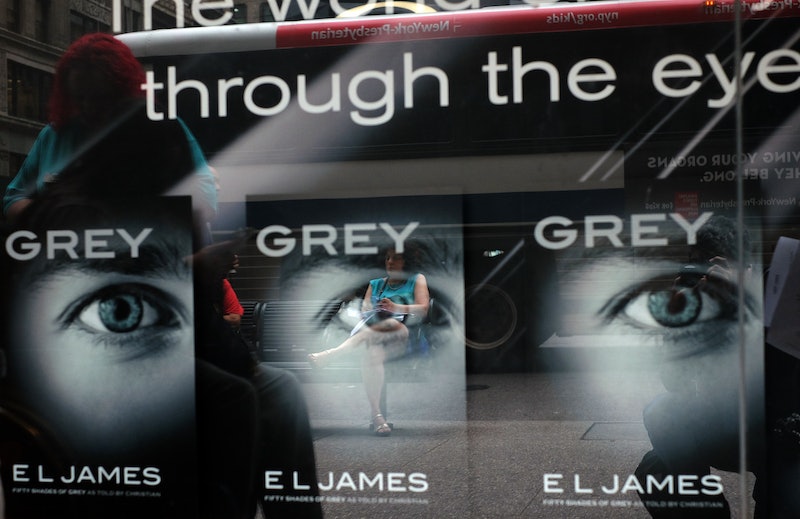 Christian Grey: BDSM enthusiast, bajillionare... and more than kind of a sexist. In the newest installment in the new Fifty Shades of Grey book, Grey, it's very evident that our Christian Grey really needs to learn some things about feminism. It's great if our eyes widen and we feel that "darkness in the pit of your stomach" the way Ana always seems to when Christian wants to get down (this stuff can be very sensual and sexy), but many critics of the Fifty Shades series have pointed out that Grey's narrator isn't such a loving boyfriend who just so happens to be very moody and into kink, but rather that Christian is often a pretty abusive jerk in his relationship with Ana.

While perhaps Grey was intended to explain away some of this criticism by making us privy to Christian's every inner thought, his narration mostly reveals that the way he thinks about women is indeed "fifty shades of fucked up." (His words, not mine.)

We're all entitled to our guilty pleasures, but it never hurts to analyze what we'd want to see different for Ana and Christian (and ourselves!) in the real world. Getting more of Christian's perspective in Grey shows us quite a bit more about his less than healthy relationship and attitude towards women. That said, I'm going to have to drop some feminism on Grey's (admittedly very nice) ass.

Here are nine times in the new book where Christian could stand some schooling.

When He Talks About Ana as a "Thing"

When Christian and Ana first meet each other's acquaintance in Grey's office so she can interview him for her school paper, they begin to discuss his business empire and his wealth. Ana asks, "So you want to possess things?" Christian's internal monologue responds, "Yes, baby. You, for one."

When He Thinks Women Aren't Funny

In this same interview with Ana, Christian notes that Ana's demeanor makes him want to laugh, noting, "Women rarely make me laugh."

Well, bucko, attitudes like yours are the ones that create a major gender gap in the field of comedy and television. And surely our savvy Mr. Grey has heard of Tina Fey, Mindy Kaling, Laverne Cox, yes? Tsk tsk, Christian.

When He Gets That Drunk Dial From Ana

A major issue in the struggle for gender equality is that women are largely considered to be helpless and therefore constantly in danger/in need of rescuing (by a dude, of course). Christian lets us know he's basically driving that bandwagon when Ana calls him drunk and his mind instantly goes to: "She's a young woman, drunk, somewhere in Portland. She's not safe."

It's good and well to be concerned for the safety of someone you care about, but immediately assuming that a woman can't handle herself while she's out with friends is a bit old school for my taste.

When He Micromanages Ana's Clothes

At this point it's pretty clear that Grey is comfortable objectifying Ana, and he goes so far as to get SUPER-bossy about what she should and should not wear. Good grief... "I make mental note to include blues and greens in the clothes I'll provide for her... She should be better dressed."

Apparently Christian is none too pleased with Ana's typical jeans and sneakers, and so goes on ahead and gets her a whole new wardrobe. Despite several protestations from Ana. This just in: Women can wear whatever we like! We'll wear a dress if we want to, sweats if we want to, and maybe the odd statement hat if we want to. Fine if you want to give gifts, but it's not alright to dictate how a person dresses.

When He Tells Ana How She Feels

Not how he feels, but really tells her what her own feelings are. After their first foray into spanking, Christian asks Ana how she felt, when she answers him with, "Confused," he responds by saying, "You were sexually aroused by it, Anastasia."

...Well, she said she's confused, and since you asked her how she is feeling, I'm going to believe what she said, because women are fully capable of assessing and asserting their feelings. Excellent try, though, friend!

When He Treats Ana as a Means to An End

At first, Christian made a big show out of not being able or willing to sleep with anyone else in his bed. However, he drops this deal-breaker pretty quickly with Ana, and wonders why he is allowing her to sleep with him. His answer? "It's because I sleep better with her. She's my dream catcher. She keeps my nightmares away."

I totally understand liking to doze off with someone I love, but for goodness' sake, it's not because I need them to be my emotional security blanket. Everybody has emotional issues that they work through, and we all need help at times. But it's not a-OK for anyone to use a woman to prop themselves up and treat them like a cure-all for their angst. That's a hard no, Mr. Grey.

OK, I'll Give Him A Tiny Bit of Credit

With a major qualifier. This book reveals, from Christian's perspective, that he is very intent on asking for and gaining consent. When propositioning Ana, he thinks to himself, "I want her submission, but more than that I want her consent." This is an area where I strongly suspect E.L. James was trying to counter the critical abuse narrative — consent comes up A LOT in the beginning of Grey — though the inner-monologue from Christian does little to dispel the feeling that Ana is often being coerced, and that Grey takes advantage of their power dynamic for his own sexual gain. So, OK, thank you for making a big deal out of consent (because it is a big deal), but his penchant for manipulation and control still feels very unsettling.

So as it is now, Christian is no feminist hero. If we're grading him like graded Ana on her sex skills, I give him a D- in feminism, but an enthusiastic A on sticking to his running schedule.

More like this
16 Novels That Paint A Realistic Portrait Of Abortion
By K.W. Colyard
'The Summer I Turned Pretty' Book Ending Is An Emotional Rollercoaster
By K.W. Colyard
At 14, Jenny Han Wrote Rom-Coms About Her Friends & Fan Mail To Leo DiCaprio
By Alyssa Lapid
10 Must-Read New Books Out This Week
By K.W. Colyard
Get Even More From Bustle — Sign Up For The Newsletter