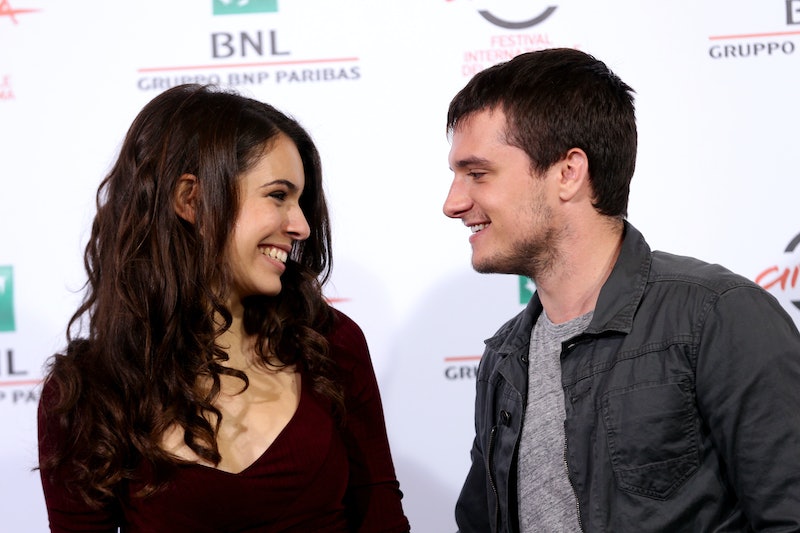 It's finally official. After literal years of "we're pretty sure they're dating but are they really?" A rep from Josh Hutcherson's new film Escobar: Paradise Lost has confirmed to Bustle that the Hunger Games star Hutcherson is dating actress Claudia Traisac. YAASSSS. The happy couple, who have reportedly been together for two years (since, according to Us Weekly, they met as co-stars on the set of Escobar: Paradise Lost ), have always hinted about their relationship but never actually confirmed it — until now. *dun dun dun*

In fact, the Josh Hutcherson/Claudia Traisac "are they or aren't they?" mind games got so intense that we actually did our own detective work to determine the status of their relationship (their lack of social media presence proved this to be quite difficult), but it's this confirmation really has us celebrating. After all, before this, all fans had to go on were the occasional kissy paparazzi photo, tabloid report, and one "OK, yeah, they're probably together" quote from Hutcherson himself.

Us Weekly broke the hearts of Peeta Mellark fans errywhere when they published this photo of Hutcherson and Traisac, now both 22, embraced in the world's cutest kiss in Los Angeles in 2013. The magazine claimed that the Spanish actress was rocking Hutcherson's plaid shirt, because there is literally nothing better than wearing your boyfriend's plaid shirt.

Since then, the Mockingjay star essentially confirmed the relationship — though not quite — in an interview with Glamour in October 2013. When the mag mentioned that he "met his girlfriend" on the set of Paradise Lost and asked him his thoughts on dating co-stars, Hutcherson didn't exactly deny anything:

"As far as I'm concerned," he said at the time, "you're both actors, you understand each other's lifestyle, so it's a very natural thing to have happen."

But despite these comments — and the fact that they kept being photographed hanging out together — entertainment sites still often referred to Traisac as Hutcherson's "rumored girlfriend." But now we can all rest easy, because it is officially official: Josh Hutcherson and Claudia Traisac are dating, and we have #relationshipgoals to last us for years.

Editor's Note: When originally published, this article read that the confirmation came from Josh Hutcherson's rep when it in fact came from a rep for Hutcherson's film Escobar: Paradise Lost.