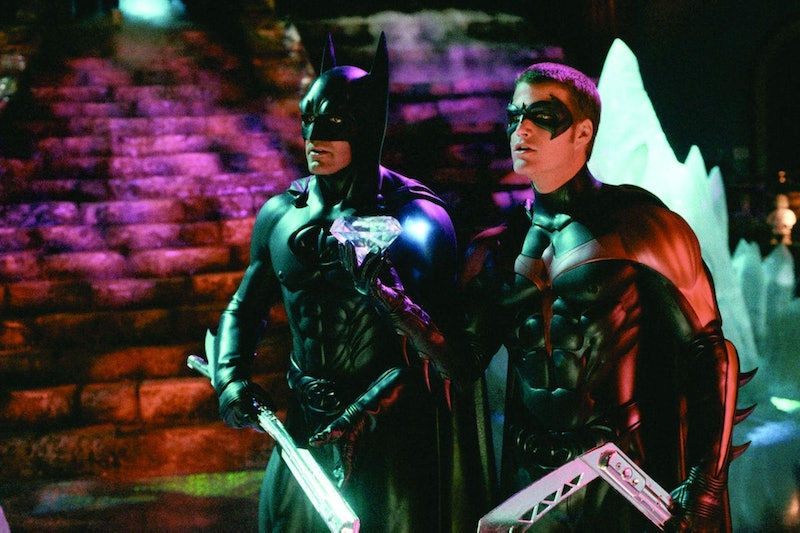 If you ever watched Joel Schumacher's 1997 Batman franchise sequel, Batman & Robin , then you know the film (and its infamous bat nipples) was kind of...well, not exactly a masterpiece. Though the cast, which included George Clooney, Chris O'Donnell, Arnold Schwarzenegger, Uma Thurman, and Alicia Silverstone, was golden, the film ended up disappointing much of its fanbase when it was released. In fact, after the film hit theaters, the Batman film franchise nearly didn't recover: It would take eight years before Christopher Nolan made the much more serious and on-brand Batman Begins with Christian Bale, after many aborted attempts to restart the franchise along the way. One such attempt was the canceled sequel, Batman Unchained , and if recently-surfaced details are any indication, it would have been...wait for it... batshit crazy. (Pun very much intended.)

According to The Hollywood Reporter , Batman Unchained would have been directed by Schumacher himself as a follow-up to Batman & Robin, and would have still starred Clooney and O'Donnell as the titular heroes... although Silverstone's Batgirl would not have starred alongside them. According to the report, Warner Bros. was angling for "a more serious direction" featuring a "psychologically complex take on the character" — something Schumacher claims to have wanted to do following Batman Forever before "getting pushback from the studio and ultimately making Batman & Robin" instead. Sure, Joel.

Sadly, Batman Unchained never saw the light of day: after the release of Batman & Robin, all plans for a sequel were scrapped. Wait, did I just say "sadly"? Why, yes I did, because if this unearthed scoop on the film is true, it would've been a sight to behold:

In THR 's piece, Schumacher recalled traveling to the set of Face/Off to personally ask Nicolas Cage to star in Unchained as the movie's main villain, Professor Jonathan Crane, aka Scarecrow. (In other words, the same villain played by Cillian Murphy in all three of Nolan's Dark Knight films.) Sure, that casting choice sounds like so-good-it's-bad territory now, but remember that, at the time, Cage was hot off his Best Actor win at the 1996 Oscars, for Leaving Las Vegas. The two years between the release of that film and Face/Off also saw Cage star in The Rock and Con Air, two of the biggest action movies of the '90s. So getting Cage to star as the villain of your mega-budget superhero movie was a pretty big deal.

Although the Hole frontwoman was only just starting her film career around the time of Batman & Robin (she had just appeared as Woody Harrelson's wife in Milos Forman's The People Vs. Larry Flynt the year before), she was apparently Schumacher's first choice for Unchained's second main villain: Harley Quinn. Although in the comics, this character is frequently a love interest for The Joker, THR reports that screenwriter Mark Protosevich had decided to make her his daughter. While Scarecrow had a personal vendetta against Bruce Wayne himself, Harley Quinn would have been gunning for Wayne's alter ego when she learned he was responsible for her father's death.

As THR adds, eventually, Scarecrow and Harley Quinn would have teamed up to drive Bruce Wayne insane and then have him locked up for good in Arkham Asylum. This plan involved poisoning Batman with Scarecrow's fear-inducing gas, resulting in a climactic scene featuring — not an epic battle between the Caped Crusader and his foes — but a hallucinating Bruce Wayne, who imagines himself literally on trial by the demons of his past. Yes, Unchained would have had the exact same ending as Seinfeld.

Those demons of Batman's past who put Batman on trial? Yeah, that's code for "every single villain ever." According to THR , Schumacher wanted to tie Tim Burton's two films together with his own previous installments by uniting all the bad guys in Unchained. Bruce Wayne's hallucination would have had him standing trial before Jack Nicholson's Joker, Michelle Pfeiffer's Catwoman, Danny DeVito's Penguin, Jim Carrey's Riddler, Tommy Lee Jones's Two-Face, as well as Cage's Scarecrow and Love's Harley Quinn. (No word on Schwarzenegger's Mr. Freeze or Thurman's Poison Ivy.)

And I thought Spider-Man 3 had too many villains! Perhaps this glut of big-name stars is what prompted Schumacher to inform Protosevich, according to THR , that he had written "the most expensive movie ever made." Needless to say, Warner Bros. never green-lit it.

To add insult to injury, Unchained would have ended with Batman jetting off to Bali, of all places. "After defeating his demons, Bruce travels to Bali, where Protosevich read in real life monks enter a cave full of bats to show they have conquered fear," THR 's report states. "In the script, Bruce enters the cave as bats swarm around him. Credits roll." Sure, there's a similar image in Nolan's Batman Begins (above)... but that cave is in the dank underground of Gotham, not the sun-drenched shores of Bali. Honestly, Bali?! Now I'm just picturing Batman lounging on a beach in full costume, sipping a piña colada out of a coconut with sunscreen smeared on his cowl.