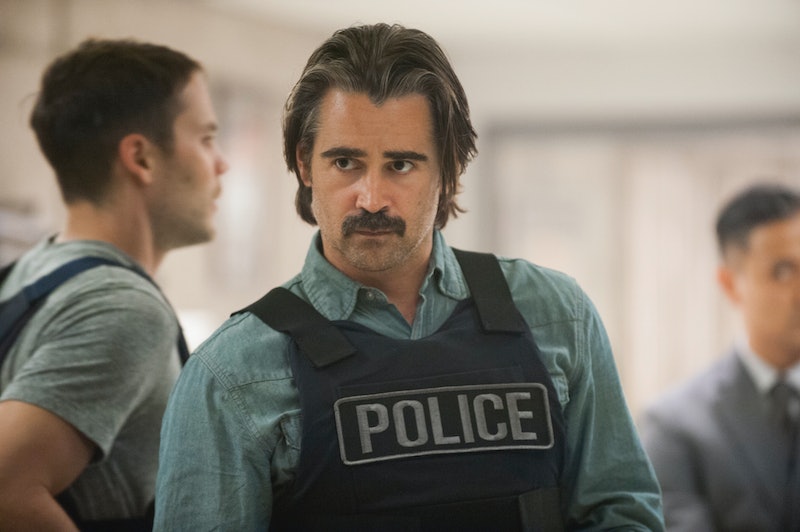 The return of True Detective, which premieres its second season on HBO on June 21, is a bittersweet one. The first season was so obsession-inspiring, head-scratchingly good. Easily one of the best shows on television last year, True Detective Season 2 is cause for much excitement. But, while writer Nic Pizzolatto returns, his original characters are gone, as is Cary Fukunaga, who directed all of last season (including the crazy excellent long take that I'm still thinking about today). With so much of what we love about the first season not returning, will the show be the same? This worry goes double for the absence of Rust Cohle. Expertly played by Matthew McConaughey at the peak of his McConaissance, Cohle's beer-can-carving, philosophy-rambling personality was half the reason to watch the show. So, can Colin Farrell measure up this year? Is Farrell's Detective Ray Velcoro the new Rustin Cohle?

In the most general terms: yes. This is a character who is captivating, and who you're going to want to spend eight episodes watching. But there are deeper similarities than that. Here are a few things Detectives Velcoro and Cohle have in common.

Their Names Have Deeper Meaning

Leave it to Pizzolatto; he comes up with the most obviously symbolic names this side of Mad Max's Vuvalini. Rust Cohle — full name, Rustin, as in this metal is rustin'— was meant to evoke dying, decaying matter. The full meaning of Ray Velcoro's name has yet to be revealed, but I bet the similarity to "Velcro" is no coincidence; it does seem like something from the past is sticking to him and following him around.

They Both Drink A Lot

It would've been a cheeky throwback to have Velcoro throwing back a can of Lone Star beer, but Pizzolatto has promised to stay away from those. “There are no references or homages at all in True Detective Season 2,” he said in an emailed statement to the Wall Street Journal. (You can stop looking for obscure literary Easter eggs now, unless you think he's trying to throw you off-course.) Instead of sucking down beers and turning the cans into metal dolls, Velcoro goes straight for the hard stuff — and a lot of it.

We know Cohle had a family; we know it ended badly. Most of the time, when we see Cohle, he's alone. Velcoro is also separated from a past wife, who doesn't appear to be in the episode at all. Like Cohle, the gulf between them is huge. Velcoro is different, though, in that he does have a relationship with his son. If you thought Cohle's loneliness was sad, this subplot in the first episode of Season 2 is heartbreaking from beginning to end.

Velcoro doesn't speak with the same musical poetry that Cohle used (and annoyed Marty Hart to death with) — Velcoro is much more blunt and to the point — but he does get some really good lines in the first episode. I won't spoil them here, but if you were afraid that switching time periods, locations, and characters would mean that the True Detective writing flair would be gone, you don't have to worry.

They Both Work Nowhere

In the first season of True Detective, Hart and Cohle are out in the wilds of Louisiana, looking into the dark corners of tiny, forgotten towns in the swampland — the unfamiliar terrain added to the show's mystical spookiness. By comparison, Southern California should seem downright cosmopolitan, but Velcoro is working in a town hiding in plain sight: Vinci, pronounced like Da Vinci. It doesn't have the glamorousness of LA or the serenity of San Diego, and, when Velcoro shows up on the a highway crime scene to investigate the main case of the season, even the other cops don't seem to recognize the town name. It's not quite California's underbelly, but it's forgotten enough to be a little bit like the Wild West.

They're Both Under Investigation

Well, Cohle was being questioned more than he was seriously under investigation, but the cops were trying to get a look under the hood there, so to speak. (Bad idea.) Velcoro? "I welcome judgement," he says.

Whether it's a shaggy ponytail or an ill-conceived pornstache, both men have hair that lets you know they have some inner turmoil.

I'm looking forward to seeing how Velcoro's character diverges from his predecessor over the course of True Detective Season 2.

More like this
Keke Palmer Just Announced She's "Going To Be A Mom" On 'SNL'
By Brad Witter
The 'Kenan & Kel' Reunion On 'SNL' Took A Dramatic Turn, Thanks To Keke Palmer
By Brad Witter
This 'White Lotus' Symbol Could Hint At A Major Character's Death
By Grace Wehniainen
The 'Firefly Lane' Book Ending Teases Way More Tears To Come In 2023
By K.W. Colyard
Get Even More From Bustle — Sign Up For The Newsletter