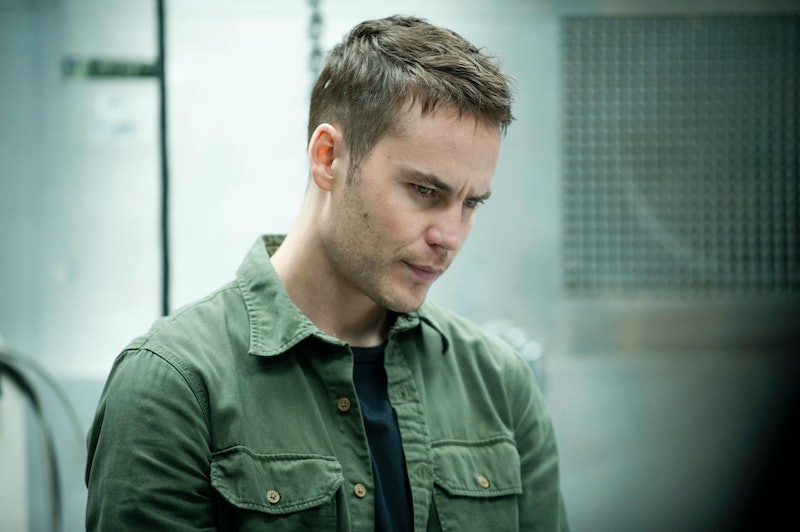 Look, I know it's hard to look away from the so-perfect-it-can't-be-real face of Taylor Kitsch. Especially if you, like me, have been swooning over Kitsch ever since he uttered those immortal words, "Texas Forever," on Friday Night Lights back in 2006. But, if you managed to tear your eyes away from his impressive visage on Sunday night's True Detective Season 2 premiere, you noticed something important about Kitsch's character, Paul Woodrugh. When the officer dips out to shower, it's obvious that Woodrugh suffered some serious burns in the past on his neck, shoulder, and chest. We know that Woodrugh is a veteran, but the scars are, allegedly, not from his time serving his country. So, how did Woodrugh get his True Detective burns?

OK, fine, no one is going to blame you if you have no idea what I'm talking about. Kitsch stripping down to take a shower is a sight that likely caused you to momentarily black out from being so attracted to another human being. But, all that aside, it's clear that Kitsch's character has a very interesting and possibly dark past. In the Season 2 premiere, Woodrugh explains that at least some of his scars didn't come from his time in the army, they're from "before."

After seeing Woodrugh hop back on his motorcycle and speed down the highway like he had a death wish (if you didn't have heart palpitations watching that speedometer rise past 150 mph, lucky you), it seems possible that the officer's burns could be from a motorcycle accident. I mean, he did almost crash at the end of that ride and it seems like the risk of riding a motorcycle at high speeds is something that's helping him cope with the emotional trauma of his life before True Detective begins. Earlier in Sunday's premiere, Woodrugh pleads with his boss to keep him on the road because that's where he feels he fits in best with his career. Or it could be something totally unrelated to anything we've seen before. A childhood accident, heroic endeavor, tragic history — the possibilities are endless until we learn more about Woodrugh.

While we wait for that, at least we can take comfort in the return of a brooding Taylor Kitsch to our TV screens. And Woodrugh is clearly the perfect fix for our undying Tim Riggins love.