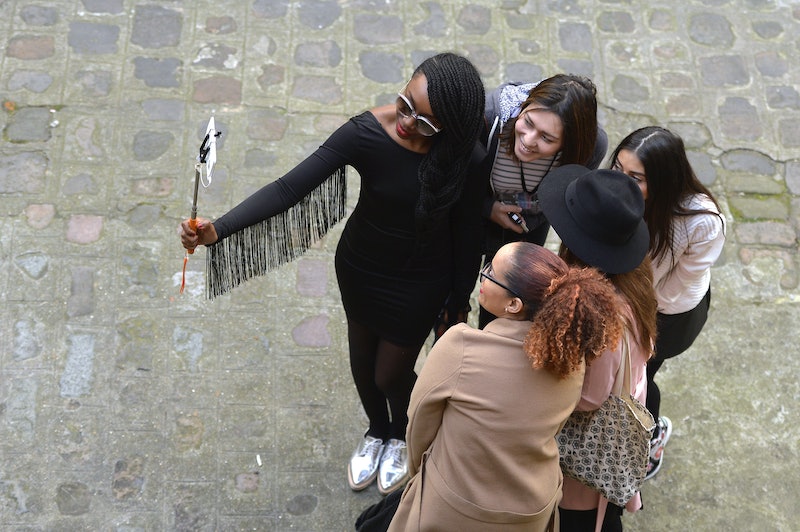 Have you ever wished that certain trends would just… disappear? Copywriter Eileen Matthews and graphic designer Cristina Vanko certainly have — but instead of just complaining about it like the rest of us, they're actually doing something about it. Their 100 Things That Should Die project on Tumblr and Instagram not only digs the graves for things like 9 AM meetings, pre-distressed jeans, and selfie sticks, but — even better — buries them deep. And the epitaphs they've written for all these annoyances? They're the best. And no, I'm not just saying that — even if the phrase “it's the best” should probably be meeting its end next. I mean, everything can't be the best, right?

Vanko and Matthews, both of whom are based in Chicago, work together at their 9-to-5 gigs at an advertising agency. They both love their jobs, according to Matthews — but, as any creative can tell you, having a job you love that utilizes your artistic skills isn't always enough. You need to keep finding ways to create new things off the clock, too, which is where 100 Things That Should Die comes in. Said Matthews to Bustle in an email interview, “Cristina especially is great at finding opportuniries that we can contribute to and when she told me about The Great Discontent's 100 Day Project on Instagram, I was immediately down.”

First launched in 2014, the 100 Day Project draws its inspiration from a long-running workshop class taught by Michael Bierut at the Yale School of Art. The workshop requires each student to choose “one action to repeat every day for 100 days,” whether that action was drawing a poster in less than 60 seconds or dancing in public. Artist Elle Luna and her friends took that concept and created the 100 Days Project last year; now in its second year, the social media campaign encourages people to do one thing every day for 100 days and document the results on Instagram.

Vanko and Matthews found out about the project the day before it started, so they had to brainstorm quickly between meetings and other deadlines. Loads of fun ideas emerged during that frantic and exuberant day of development, said Matthews; towards the end of the day, however, the duo hit upon the clear winner. "I remember riding the Chicago Brown Line home from work together that day and this idea just hitting us," she told Bustle. "When you get an idea that both you and your creative partner are equally bright-eyed and jazzed about, you know it's a good one.”

That bright idea was 100 Things That Should Die: A graveyard of beautiful paper headstones, each laying to rest the most irritating things you can think of. Decaf coffee? Gone. Fake pockets? Buried. The hashtag #soblessed? #sodead. They're absolutely gorgeous… and also absolutely laugh-out-loud funny.

The graveyard format “manifested quite naturally,” according to Matthews. “Cristina is a very talented handletterer and I take pride in my clever-hearted quick wit,” she said — Vanko has a book entitled Handlettering for Everyone coming out in the fall, and Matthews is both a staff writer for The Neapolitan Online and a Second City-trained comedian — so hand-lettered and hilarious epitaphs seemed like “the perfect canvas to mesh both of those elements.” The idea came to full fruition after the pair got a hold of a patch of fake grass from their office's photography studio.

According to Vanko, they started the project with a list of ideas in hand; however, she told Bustle, “A lot of our inspiration for better, relatable ideas come from our experiences, conversations, and things we see in everyday life.” Added Matthews, “We have a master brainstorm list of annoyances and really, we just pick whatever is particularly speaking to us at the moment. Occasionally we will make spur-of-the-moment kills, as was such with The Kylie Jenner Challenge. That needed to go. Immediately.”

I think we're all in agreement about that one.

Of course, what I really wanted to know was this: Out of all the things that Vanko and Matthews have sent their graves, which ones do they think were most deserving of getting the axe? Both of them noted that they've got some “golden ticket graves” they're hanging onto for the project's epic finale, so I have a feeling that the best is yet to come — but Matthews listed landing strips, “Keep Calm and Carry On,” the Washington Redskins, and the fear of pooping at work among her “more passionate kills.” Vanko agreed with pooping at work: “I hate how people strategically hide in stalls waiting for others to leave and then worry people may notice them by the shoes they're wearing,” she told Bustle. “Ridiculous. We all do it, get over it!”

For more, head on over to the 100 Things That Should Die Tumblr and follow @empluscv on Instagram.