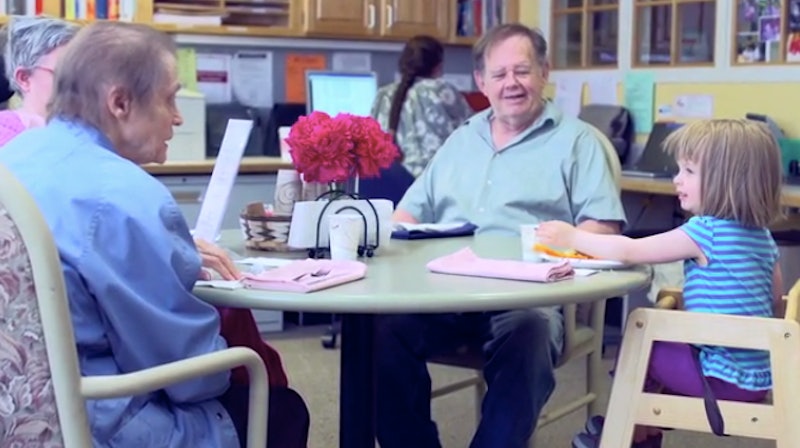 The only thing more adorable than watching a bunch of pint-sized preschoolers chat with each other? Watching them chat with a room full of senior citizens. So goes the premise of the touching documentary Present Perfect , which describes itself as an exploration of "the very real experience of aging in America — both growing up, and growing old." In it, filmmaker Evan Briggs documents a year in the life of the Intergenerational Learning Center in Seattle, where a retirement home and a preschool sit nestled under one roof. And a trailer for the film promises it's going to be heart-meltingly good — so long as it can find its way to viewers. (The film is currently in post-production and has only 12 more days to go on Kickstarter to reach its goal of $100,000.)

Briggs shot the film over the course of the 2012-2013 school year from inside the Providence Mount St. Vincent nursing home where the learning center is located. And while you might think the resulting footage was a lot of comical moments that could only be shared between a tiny toddler and a sweet grandma... sure, there was plenty of that. But there also seem to have been loads of touching moments that get at the slightly darker parts of what happens to us when we age. As Briggs reminds us, 43 percent of older adults experience social isolation; but the program at "the Mount" is designed to socialize the adults as much as the children.

On her Kickstarter page, the filmmaker explains a bit more about what drew her to the project:

When I heard about the Mount and its Intergenerational Learning Center, I was struck by the simple perfection of the concept. I was further intrigued by the idea that with neither past nor future in common, the relationships between the children and the residents exist entirely in the present. Despite the difference in their years, their entire sense of time seems more closely aligned. As busy, frazzled, perpetually multi-tasking adults, we are always admonished to live ‘in the moment’. But what does that mean? And with the endless distractions provided by our smart phones and numerous other devices, how can we? I was curious to observe these two groups, occupying opposite ends of the life spectrum, to see firsthand what it meant for them to simply be present with each other.

According to Briggs, who is also an adjunct professor at Seattle University, the residents did a "complete transformation in the presence of the children" during the process of filming. "Moments before the kids came in, sometimes the people seemed half alive, sometimes asleep," she wrote. "It was a depressing scene. [But] as soon as the kids walked in for art or music or making sandwiches for the homeless or whatever the project that day was, the residents came alive." And it's pretty easy to see that happening on screen, even if just from a four-minute trailer.

...to helping each other get through the hard stuff (like buttoning fickle jackets); the obvious and instant connection between the residents and their little students is just... well, I can't. I just can't.

Okay, now go on and watch the trailer below, and prepare yourself to feel some things. Then head to Kickstarter and donate to Briggs' fund — because come on, this film needs to get made.

More like this
Remember These Ancient Pieces Of '90s Tech?
By Lucia Peters and Emma Carey
11 Trends From The ‘90s That Made You Feel So Cool
By Julie Sprankles
Starbucks’ Chocolate Cream Cold Brew Tastes Like This Retro Candy
By Emma Garza
Shocked Fans & Former Co-Stars React To Ray Liotta’s Death At 67
By Grace Wehniainen
Get Even More From Bustle — Sign Up For The Newsletter