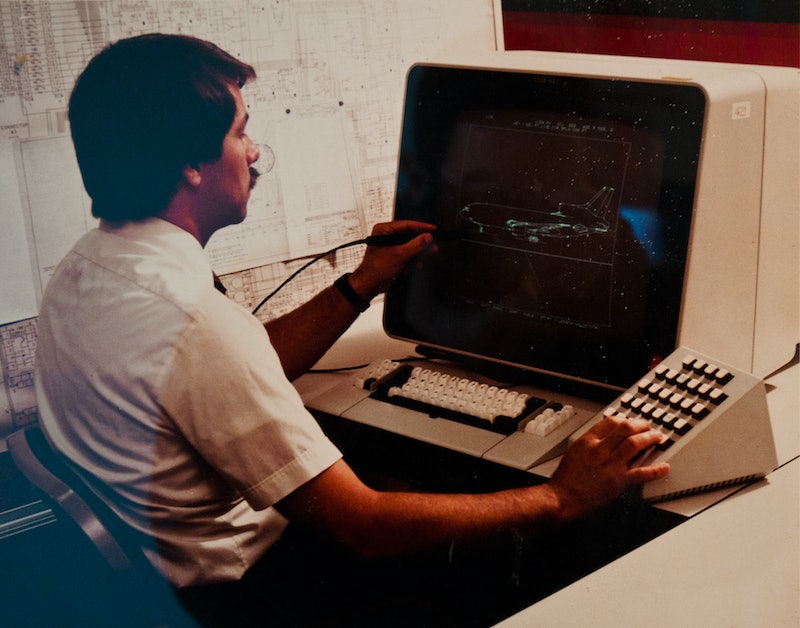 If you ask me (or probably any other person my age), mixing parents and technology is just a recipe for disaster. My dad barely manages to remember how to work the DVD player — which he still insists on calling a "tape player." So, imagine my surprise when one day he was toting around a shiny new iPhone.

As soon as I saw him proudly showing off his brand new "cellular device" to anybody who would listen, the earth literally shifted under my feet. I recognized that life as I knew it was about to change. I quickly accepted that I now had to dedicate my entire life to teaching him how to use this newfound technology, to ensure he didn't make a royal mess out of everything. After all, he may have been good at showing off his new phone, but he still had no idea how to turn it on.

Maybe I'm being a little dramatic about the situation. But, honestly, seeing my dad with a nicer iPhone than the one I had called for a little drama.

Since then, my dad has convinced himself that he's the "technology master" — even though he still doesn't know how anything works. Perhaps my dad is ridiculously slow to catch on, but they say that it's tough to teach an old dog new tricks. So, I'm willing to bet that every mortified child has experience at least one of these tribulations.

Here are eight things that happen when your dad finally discovers technology. Spoiler alert: none of them end well for you.

1. He sends you ridiculous text messages

It was game over as soon as my dad discovered the convenience of sending a quick text message, especially since he hates talking on the phone. But, regardless of how many times I've tried to explain how text messaging works, I can't get the guy to stop treating it like a formal letter. Every single text starts with "Dear Kat" and ends with "Love, Dad." Dad, I know it's you, and I know you love me. For the love of God, just send a normal text message.

Also, if you value your sanity, don't even bother showing him the voice to text feature. He ends up yelling at his phone in the middle of the grocery store, only to send you a jumbled message that makes absolutely no sense. Thanks, dad.

2. He starts speaking in Internet lingo

If I had a dollar for every time my dad said "hashtag" before a word, I'd be enjoying an early retirement in the Maldives instead of writing this. Once your dad discovers "LOL," "OMG," or "WTF," forget about ever having a normal conversation again. It's all downhill from here.

3. He asks you how to work absolutely everything

I've accepted the fact that my dad will never actually know how to work technology. He just pushes buttons until he stumbles upon the right thing. We can't make it through a single dinner without him handing me his phone and saying, "See what the hell is going on with this thing!" It's also never his fault when things aren't working right. It's definitely the "damn technology".

4. He butt dials you all of the time

My dad will never understand touch screens either. As you can probably imagine, this leads to a lot of interesting pocket dials. One time, I listened to him place an entire order for Chinese food in a restaurant. He was quite perturbed when I texted him to ask how he was enjoying his Moo Goo Gai Pan. Sweet revenge.

5. He downloads a bunch of viruses

Admittedly, my dad's a little bit better at using his computer than he is at using his iPhone. But, he still finds a way to download his fair share of ridiculous computer viruses. Recently, he managed to have all of his files encrypted by clicking on a link to download a "psychedelic screensaver." Way to go, dad. Hope it was worth it.

6. He becomes "friends" with your friends

My dad hasn't joined Facebook yet (there is a God!). But — if he did — I know that pretty much all of my friends would want to be his Facebook friend. I mean, I'm Facebook friends with plenty of my friends' parents. It's like a rite of passage in our generation. I'm trying my best to delay the inevitable for as long as possible.

Call me a masochist, but I recently bought my dad a Fitbit. Apparently, the iPhone just wasn't quite enough torture for me. Now, most of my conversations with my dad consist of unnecessary updates about his physical activity. Dad, I love you regardless of if you walked 20,000 steps today or two. I really don't care.

8. He basically has no idea what he's doing

You're better off just accepting that your dad will probably never understand technology — while simultaneously insisting that he's got it down pat. So, resign yourself to the idea that you'll always have to remind him how to retrieve a voicemail or send a text message.

Whenever you're feeling frustrated, just remember that he had to wipe your butt and put up with you through your teenage years. So, you're still winning.