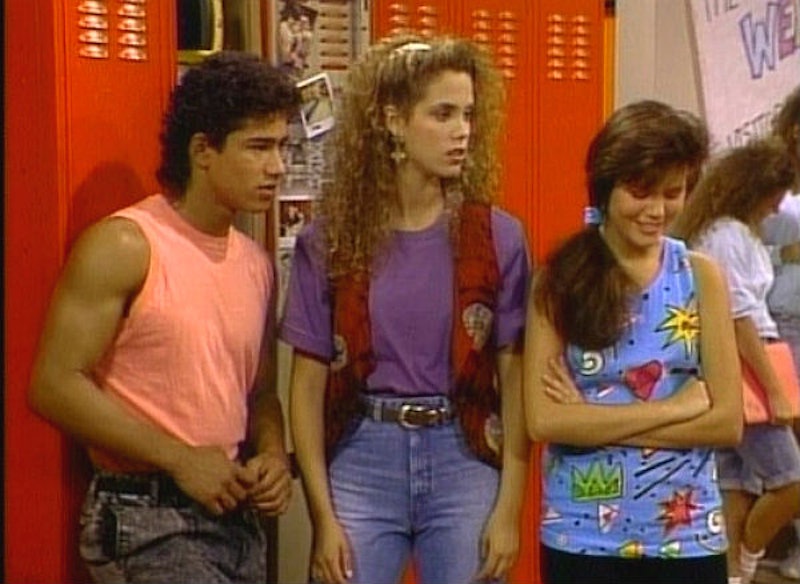 In the world of Saved by the Bell, Jessie Spano was a feminist. She yelled at the "pigs" on campus for calling women "chicks" and "babes." She took down multiple beauty pageants on principle. And she never, ever wore the midriff-baring tops made famous by Kelly Kapowski. As it turns out, the actress who played Jessie, Elizabeth Berkley, was not okay with her character's ultra-conservative wardrobe. What's more is that she might have a point.

Speaking with Bethenny Frankel on the Nov. 19 episode of Bethenny, Berkley shares her misgivings about Jessie Spano's wardrobe. "I didn't like it because I felt like as a young woman, just because you are a feminist, why can't you also dress in things that make you feel girly and empowered?" she says.

Those of us who loved the 1989 sitcom know that Jessie could often be found in baggier, long-sleeve tops buttoned all the way up to her neck, eliminating the possibility for being sexualized by the boys at school. And when an occasion for bathing suits or other clothing with less coverage, Jessie was almost always in a one-piece while the other girls were bearing their middles. Her restraint was in the name of feminism, but as blogs like Feministing and Jezebel have pointed out in the past, Jessie's feminism was flawed.

In fact, it consisted of policing the school for guys who say "chick," taking down anti-feminist activities like pageants, keeping herself covered up, and somehow dating the least feminism-inclined guy in the entire school (A.C. Slater). "Jessie seems to carry this ridiculous burden of being trapped between speaking her mind and making her pink tank top wearing macho boyfriend happy," wrote Hortense Smith in 2009. (You see, we've had a lot of time to think about Jessie Spano since 1989.) While we rarely focused on the wardrobe section of this argument, it's possible that Jessie's "feminist wardrobe" was flawed too.

Mostly because a "feminist wardrobe" is not a thing. The point of feminism — if we're going to paint with a Saved the Bell-sized brush — is to create a world in which women's lives aren't dictated by men and the societal expectations that are already in place. Wearing some uniform of librarian blouses goes against feminism, because the point is working to promote our ability to be individuals apart from "the rules."

Plus, dressing with extreme modesty in order to avoid being sexualized isn't exactly a win for feminism either, because it puts the responsibility of desexualization on women, not on the onlookers who do the sexualizing. It's still clothing being chosen for men, and not for the woman herself. If Jessie wanted to wear a bikini because it made her feel good, Jessie should have worn that bikini. Women should choose the clothes that make them feel most like themselves, and not a dutiful uniform meant to hide them from those who might try to dictate the clothing's meaning.

It reminds me of an image posted earlier this year, which depicts a sort of ruler drawn on the back of a woman's leg that measures skirt lengths; too low is "matronly" and too high is "asking for it." And while this image demonstrates the difficulty of buying clothes and getting dressed in the morning while trying to determine what your skirt says about you, it also highlights the issue that judgments are constantly placed on women's clothing. When applied to this discussion, it shows Jessie Spano wasn't actually avoiding the judgment of the male gaze. She was unwillingly choosing the end marked "matronly" with an unforgiving Sharpie. Again, that perception is no reason to change her wardrobe — if it changes, it should be for her — but it proves that when dressing based on men's perceptions of oneself, there is no way to win.

And, of course, if Jessie (the character) was truly unlike Berkley, she might have actually enjoyed her often-hideous blouses and body-obscuring vests, in which case, more power to her. If that was the case, she was dressing for herself. But considering that Berkley spent four years playing the girl, you'd think she might have the best insight into the character; she probably knows a thing or two about what Jessie would really want to wear. And when it boils down to it, Berkley is right: wearing a bikini would not have ruined Jessie's ability to be a feminist. Because despite the obtuse Saved by the Bell definition of feminists, resisting clothing that makes you happy is not actually how it works.

More like this
Sandra Bullock, Girlboss Extraordinaire
By Matt Harkins & Viviana Olen
Spice Girls’ Net Worth: The Richest Member Is Wealthier Than The Rest Combined
By Hugh McIntyre
'Love Island' Is Ditching Fast Fashion Partnerships For A More Sustainable Sponsor
By El Hunt
Kim Kardashian Just Served All The Booty In A Thong Bikini
By Allie Fasanella
Get Even More From Bustle — Sign Up For The Newsletter