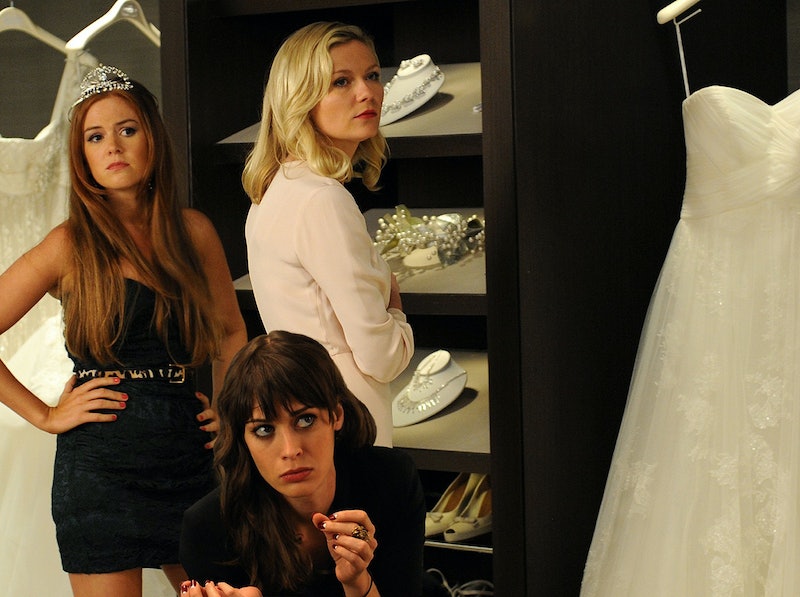 Being a bridesmaid is tough. The first time I was asked to stand in someone's wedding, I was really excited about it, and told everybody I knew. I pretty much got the same reaction from everyone — some sort of variation of "ugh." I laughed it off, feeling slightly perplexed and on the outskirts of some big inside joke between all women — why did so many people hate being a bridesmaid? It didn't take long for me to find out.

Being a bridesmaid isn't the worst thing in the world, but occasionally it can be quite frustrating. Being asked to help your good friend or family member walk down the aisle and be by her side on the happiest day of her life is exciting — but it's also exhausting, stressful, and of course, expensive. Being a bridesmaid isn't for everyone, especially if the bride gets super picky (and a little bit crazy) about her big day going perfectly.

Honestly, though? At the end of the day, being a bridesmaid really isn't as awful as everyone likes to say. It can actually be a lot of fun, if you take certain things with a grain of salt. True, there are certain dramas that are bound to pop up, but so long as you know they're coming, they are easy to diffuse. Here are 12 things that inevitably happen when you're a bridesmaid.

1. One bridesmaid will be convinced she knows the bride best

Being a bridesmaid can bring out the competitive side in even the most peaceful of people. In every group of bridesmaids, there is a girl who is convinced she knows the bride best — and since she thinks she knows everything the bride wants, she tries to take control of everything. If she's accurate, this is helpful. If she's bossy and unwilling to listen to what everyone else suggests, this is basically the worst.

2. One person will complain about money constantly

Being a bridesmaid can be very expensive, and I totally get that it's a hard thing to justify spending a lot of money on if you're struggling day to day as it is. But dealing with that one person who is constantly counting pennies makes everything more difficult. If you really can't afford it, just say no when your friend asks you to join her bridal party.

3. No one will agree on the bachelorette party

As bachelorette parties get more and more elaborate (weekend trips have become the norm, while a one-night-out-only thing becomes less popular), they also get more annoying to plan. I've never seen bachelorette party planning go smoothly. A few people aren't willing to spend the money to go away, while a few people are. Picking a date that works for everyone is close to impossible. And the worst is when the bride refuses to say what she wants, even though you know she knows.

4. Two people will end up fighting

At some point, two bridesmaids will end up annoyed or fighting with each other. I'm not saying this because of the stereotype that "OMG a group of girls can never get along because ~emotions~ and girls are such drama queens." I'm saying this because being a bridesmaid can be very stressful, which can lead to an argument so easily, especially when money is involved.

5. One person will be bitter that they aren't the maid of honor

There is always one person who thought they deserved to be the maid of honor. They end up feeling slighted, and it's pretty awkward to witness. There is also always someone outside of the bridal party who feels hurt that they weren't asked to be a bridesmaid. In these times, when it feels like we're "rating" our friends, I kind of wonder why bridal parties ever seemed like a good idea.

6. Plans will get messed up

It's really, really hard to plan a whole bunch of events that work for everyone, especially if you have a large bridal party. It's inevitable that something will get messed up at some point. In those moments, it's nice to have a group of people to rely on for help on getting through it.

7. You'll have to help the bride through some sort of disaster

Sometimes, even the happiest of brides have a little bit of a meltdown. It's normal, but it can be a little scary. Luckily, that's the point of having bridesmaids — so that you have people to get you through it. Just be prepared to stay calm.

8. You'll spend more money than you ever wanted to

Even when the bride tries to make things as cost-effective as possible, you're still going to be spending money. Between the dress, shoes, hair, makeup, accessories, bridal shower, bridal shower gifts, engagement party, engagement gifts, wedding gift... woof. It's tough.

9. Someone will do absolutely nothing to help

There will be one person in your bridal party who won't cooperate with anything. She'll always be busy, or she won't seem interested in anything, or she won't have the money. She'll be unavailable, whether it's through email or text, and getting in touch will be super hard. Ugh.

10. One girl will be super jealous

Weddings can either bring out the best or worst in people. You'll probably have a bridesmaid who is either really sad, bitter, angry, or jealous that she's not the one getting married. This is a personal struggle, so try not to get involved in that.

11. You'll feel so much hate for weddings in general

There will be certain points where you will never want to participate in or go to another wedding ever again. You'll feel so over everything, and you know what? That's OK.

12. You'll have the time of your life

Here's the good news: at the end of the day, or at the end of the wedding, you'll feel a whole lot of love for your fellow bridesmaids and bride. It's a really nice feeling! So forget about the mishaps, and start dancing.