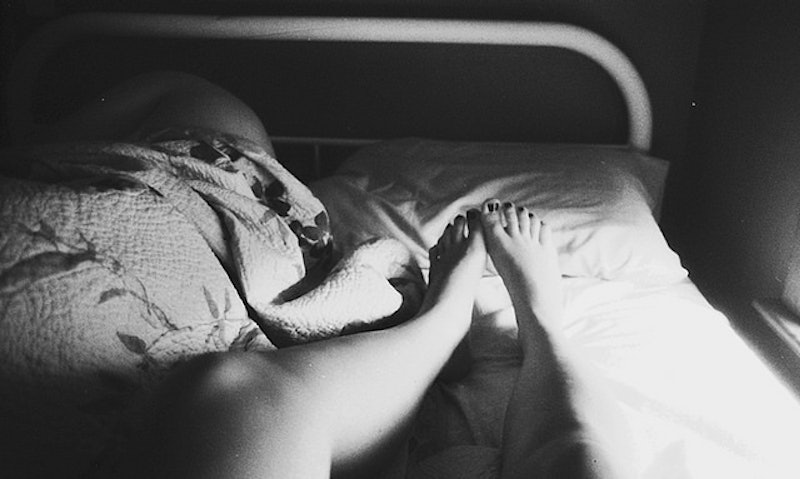 For a lot of us, college goes hand and hand with hedonism — it's the time to drink too much and have too much sex. And of course, experiment. Isn't every experimental sex story supposed to start "One time in college..."? Isn't college all sex, drugs, and rock 'n' roll? Maybe not. The latest annual student sex survey in the U.K. shows that student life isn't quite as footloose and fancy free as we think, The Guardian reports. We recently learned that one-fourth of Harvard seniors chose books over sex while at university, and things seem to look pretty similar across the pond.

The survey, conducted by Hexjam, looked at the sex lives of over 5,800 students across the UK. It asked everything from number of partners, favorite positions, amount of sex and sexual satisfaction. The amount of sex and sexual satisfaction had some surprisingly different lists — I was shocked to see one of my alma matters, The London School of Economics, ranked in the top three for amount of sexual partners, but was no where to be seen in the most sexually satisfied list. Sigh. And while some people are certainly using their university careers to go hog-wild, it looks like things aren't as crazy as you might expect. Keep in mind most U.K. courses are only three years long, so they have to pack in all their fun more quickly than our four-year college experiences!

1. 25 Percent Of Students Lost Their Virginity At University

That's a good portion of students that lost their virginity at university, but that leaves a whole bunch that entered sexually active. Nine percent of respondents had never had sex.

2. 30 Percent Have Had Sex With 1 Partner At University

So much for thinking uni isn't the place for relationships. With nearly one-third of students only having one sexual partners, it seems like a lot of people stay settled.

3. But 3 Percent Had Over 25 Partners At University

So some people are definitely sowing their wild oats then. We didn't say everyone was settled down! You go, Brits. Maybe it is always the quiet ones...

4. Leisure, Hospitality, Tourism, And Retail Students Have The Most Partners, Averaging Just Under 8 Partners

5. Doggy Style Is The Favorite Position

Sorry, girl-on-top, last year's winner has been replaced by doggy, with 29 percent voting it the favorite. But girl-on-top nabbed the second position spot with 26 percent of the vote and missionary took third place with 24 percent.

6. 48 Percent Are In Relationships

So it's about half and a half on the single/relationship split. Of those relationships 54 percent have been going for over a year, so students are taking their relationships seriously.

7. 40 Percent Of Students Haven't Had A One-Night Stand

Interested in more U.K. student sex habits? You can find breakdowns of the survey on the Hexjam website.

More like this
Hinge's New NFAQ Feature Is Demystifying Queer Dating
By Emma Carey
How Do I Deal With Both ED & Premature Ejaculation?
By Sophia Benoit
7 Women Share Their Best Orgasm Stories
By Lexi Inks
Expert Tips For Being On Top When You're Plus-Size
By Lexi Inks
Get Even More From Bustle — Sign Up For The Newsletter