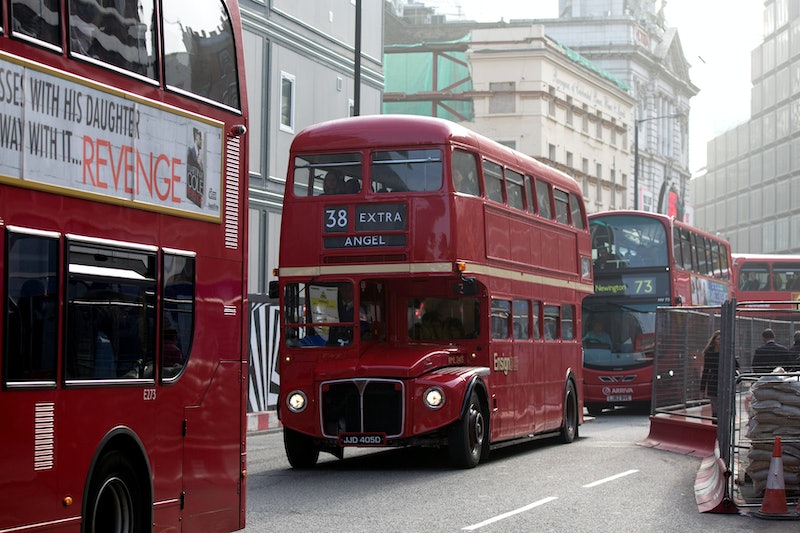 We know that it generally takes 66 days to develop a new habit — but what about breaking old ones? If you've ever found yourself wishing you knew how to break a bad habit, good news: We've got the answer. It's called the Mindbus Technique, and as a bonus, it's probably funnier than you think breaking a bad habit could ever be.

This unintentionally hilarious technique has been around for a few years; it's making the rounds again thanks to a recent episode of Psych Crunch, though, so now seems like a great time to revisit it. How does it work? Well... try this: Remember the kids who sat at the back of the bus in elementary school making fart jokes? The Mindbus Technique tells you to personify your bad habits as these people and tell them to chill the hell out — and one study on chocolate cravings showed that it actually works. Participants who practiced the Mindbus Technique ate fewer chocolates — "very tempting Cadbury's Celebrations," according to one of the authors, in case you're curious — than people given no craving-curbing strategy and those instructed to take the "urge surfing" approach, which just has you sit with your craving and wait for it to go away without doing anything about it.

The Mindbus Technique is based on the mindfulness principle of "cognitive defusion" — disconnecting from your thoughts in order to realize that your desires are not imperatives. While your cravings are the noisy people on the bus, you are the bus driver, and it's your duty to tell them to shut up and get on with your route. You are literally in the driver's seat. The fact that your cravings are spouting slurred predictions about the apocalypse or making fart noises with their arms (depending on what your image of a noisy bus looks like) doesn't mean you have to listen to them.

The animated video below illustrates the Mindbus Technique in more detail, showing how the metaphor can be used for any thought — a self-criticism ("You'll just fail like last time"), a pointless worry, a distraction ("Hmm, where's that bus going?"), a daydream ("What I'd really like to do is be a race driver") — in addition to cravings. After all, a habit can be less obvious than eating chocolate; we can also get stuck in destructive patterns of negative thinking.

Personification is actually a common therapeutic technique used to lend the thinker some distance to examine their thoughts. The psychoanalyst Carl Jung encouraged patients to imagine people who represent different aspects of their psyches and converse with them in order to pull up unconscious thoughts that might normally escape their awareness. And in eating disorder treatment, it is common to represent an eating disorder as "Ed" (an acronym for "eating disorder"), "Ana" ("anorexia"), or "Mia" ("bulimia") to help the patient uncover an identity that is separate from this character. The practice of separating yourself into multiple personas even dates back to the Upanishads, which teach you to imagine yourself as two birds, one that is acting and one that is simply observing, to gain perspective on your thoughts and actions.

If you'd like to try out the Mindbus Technique, here's a step-by-step process, courtesy of The Emotion Machine:

1. Identify something you experience unwanted thoughts about.

This can be any topic taking up too much of your mind space, from chocolate cravings to the negative body image preventing you from enjoying the chocolate.

2. Write down five of these thoughts.

Seeing them on paper helps take them out of your head.

Prepare to hop on the mindbus!

What city are you in? Who else is on the road?

5. Assign each thought a passenger.

What would your fear that everyone can totally see that zit on your chin be wearing?

The Emotion Machine suggests a mantra like “Thank for the feedback guys, but this is my bus.”

7. Picture letting each passenger off the mindbus.

That step sounds like it was tacked on to the end just to provide some closure, but can't hurt.

Enjoy your new journey through life with these cheerier travelers!