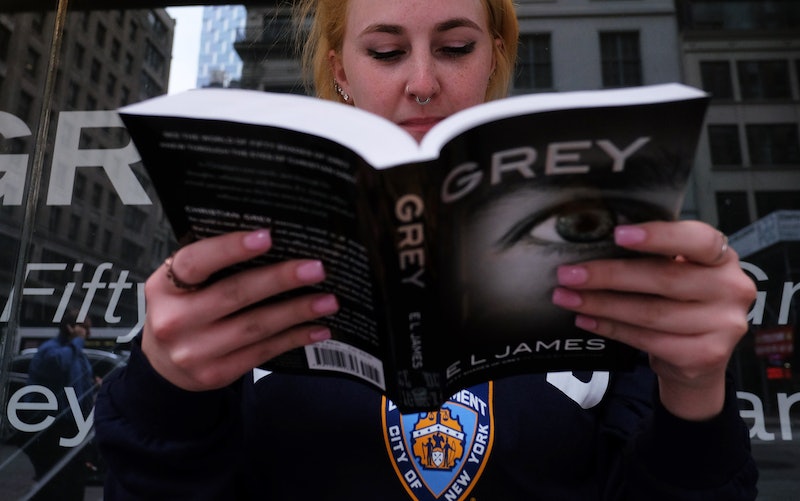 If you thought the Fifty Shades mania was wearing down, you were very much mistaken. According to an email sent to Bustle on Monday afternoon, the new Fifty Shades of Grey book, Grey , has already sold more than 1 million copies in just four days, which is a truly staggering number. The appeal of Fifty Shades has not waned after all.

In case you have somehow missed this enormous phenomenon, Grey is a retelling of the first book in the Fifty Shades trilogy from the perspective of the series' male romantic lead, Christian Grey. And as Anne Messitte from Vintage Doubleday, the novel's publisher, said in a press release, "Christian’s side of the story is proving to be irresistible.”

“This is an astonishing number of books to sell over a weekend and speaks to the engagement and passion readers have for the Fifty Shades books,” said Messitte.

The book is currently at the top of the bestseller list in the U.S., with total sales, including paperback, e-books, and audio books, resting at about 1.1 million. The book has gone back to press for second, third, and fourth printings, and currently has about 2.1 million copies in print. At this rate, they're going to need every one of them. The whole thing is even more impressive when you consider that the book was only announced on June 1, and thus did not have any sort of lengthy marketing campaign.

Of course, though these sales are certainly impressive, they also aren't record setting. To put Grey in the context of another world wide book series phenomenon, when the seventh Harry Potter book came out, it sold 8.3 million copies in the U.S. just in the first 24 hours. Still, selling more than a million copies in four days is not something most books ever manage.

So, given the obvious commercial success of Grey, will E.L. James be going on to retell the other two books in the Fifty Shades trilogy from Christian's perspective? It's anyone's guess at this point, but if the response to this book is any indication, I imagine fans will be pleased if she does.

More like this
Dakota Johnson Reveals Why Filming Fifty Shades Was “A Battle”
By Rachel Mantock
16 Novels That Paint A Realistic Portrait Of Abortion
By K.W. Colyard
At 14, Jenny Han Wrote Rom-Coms About Her Friends & Fan Mail To Leo DiCaprio
By Alyssa Lapid
10 Must-Read New Books Out This Week
By K.W. Colyard
Get Even More From Bustle — Sign Up For The Newsletter