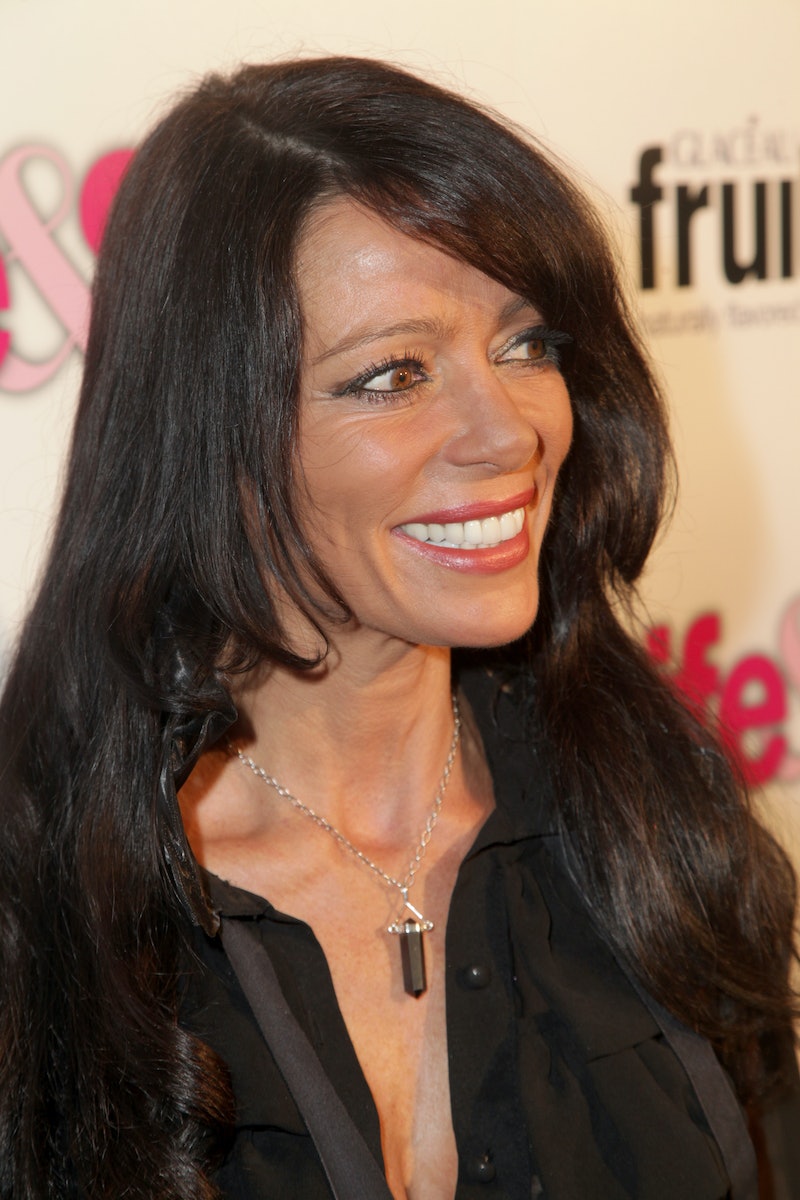 According to RadarOnline, The Real Housewives of Beverly Hills' viewership has dropped. Whoa. Why aren't people watching? Is it all SUR's fault? Do the viewers miss Camille Grammer as much as I do? Are people sick of the Sisters Richards? Is there something about Giggy audiences can't stand? (I'm KIDDING. Only a sociopath wouldn't adore that possibly fake puffball.)

Whatever the problem might be, I think new addition Carlton Gebbia could be the solution. I genuinely believe Gebbia has the potential to save the show. Yes, I like the other Housewives, but their stories are getting a bit stale. Eh, except for the Kim Richards's unruly dog subplot. That storyline is beyond nerve-racking. But Gebbia? Gebbia is absolutely fascinating. She's spooky and serious and has an intense doll collection. You never know if she's going to cackle at or be horribly offended by something. She's unpredictable. Except when it comes to Kyle Richards. She always hates Kyle Richards.

Here are a few of the many, many reasons why Carlton Gebbia is my new favorite Real Housewife:

SHE USED TO BE A DARK WITCH

She used to practice dark witchcraft, but then she had kids. She had to put her dark witchy days behind her. Her current life is all about white magic and nature. Way to bait us with that juicy tidbit, Gebbia. Now I'm itching to know all about your dark magic days.

She's all about the goth. The rest of the Housewives fill their houses with rhinestones, plush armchairs, and clear refrigerators. Their homes are lovely, yes. But do they have confessional booths in their homes? No. Gebbia's home feels like a medieval-themed house I made on The Sims. Translation: Gebbia's house is the best house. 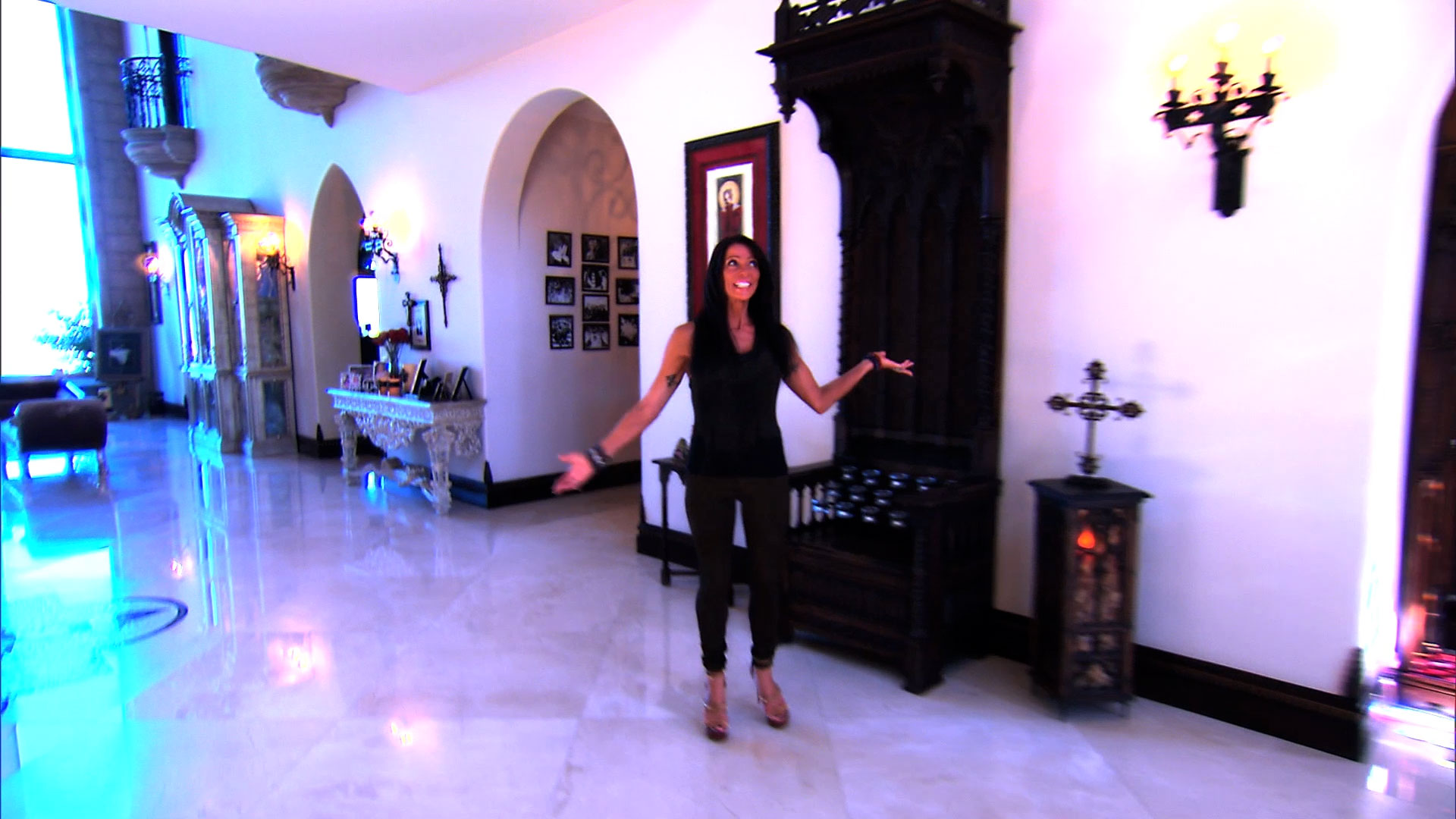 Gebbia's kids are named Destiny, Mysteri, and Cross. Those names are… unconventional. But if you dare poke fun, she will GO OFF on you. So no, I won't say anything negative about the names "Destiny," "Mysteri," or "Cross." The last thing I need in my life is a witch sending bad vibes my way.

Of course she is. They are a perfect pair. Foster is the Snow Queen to Gebbia's Elphaba. If Kyle Richards said that, it would be a dig. But when I say it, I mean it as a compliment. They are elegant, majestic, powerful women. One is fueled by the snows of the Netherlands, and the other by witchy energy. What a dream team.

Gebbia befriended the correct cast members. She is so good at being on this show.

While touring Gebbia's home, Kyle makes several comments about witchcraft and magic. Her remarks are incredibly disrespectful to Gebbia. Gebbia won't have any of it. Please see the following beautiful excerpt from Gebbia's BravoTV blog:

I'm really not surprised with Kyle's primitive and disparaging remarks about witchcraft, brooms, and spells etc. What's surprising is that she wasn't sucked into one of the witch balls. But alas they are probably not big enough for that kind of dense energy (still smiling). Seriously what's disheartening is considering how far we have evolved as a society with respect to religion, sexual preference, and ethnicity with all this progress made -- when did it suddenly become OK to have such an overt prejudice against someone's non-traditional religion? If she made those type of offensive remarks about any other traditional religion she would be in hot bloody water! And I'm not talking a cauldron!

Shockingly, there were one or two moments where Kyle and I did laugh for a second, which was a shred of encouragement -- until we commenced on a house tour. We enter my bedroom and just when I think there may be a glimmer of hope for us she speaks "Do you feel guilty having sex with a cross above your bed?" And, "this house makes me want to get the Ouija board out." And poof. . .there goes the hope.

I am so happy Gebbia is here. Kyle can be such a ignorant, offensive monster. Keep calling her out, Gebbia! Yeah, Glanville says lewd, inappropriate stuff, but at least she's not patronizing as hell about witchcraft. Also, Kyle isn't funny. Glanville is funny. Gebbia gets it.

Gebbia's garden is full of witch balls and now I'm obsessed with witch balls. As Gebbia explains in her BravoTV blog:

A witch ball is made from brightly colored glass with strands of glass inside, it's believed to entrap any negative energy enticed by its colors.

Seriously? A negative energy trap? I don't mean to go all Veruca Salt on y'all, but I want a witch ball and I want it now. I need one in my car. The other day, I found myself furious with a pedestrian in a crosswalk while I waited to make a right hand turn. I convinced myself the pedestrian was walking slowly because he wanted to ruin my life. Yep, I'm the worst. I think a witch ball would even me out.