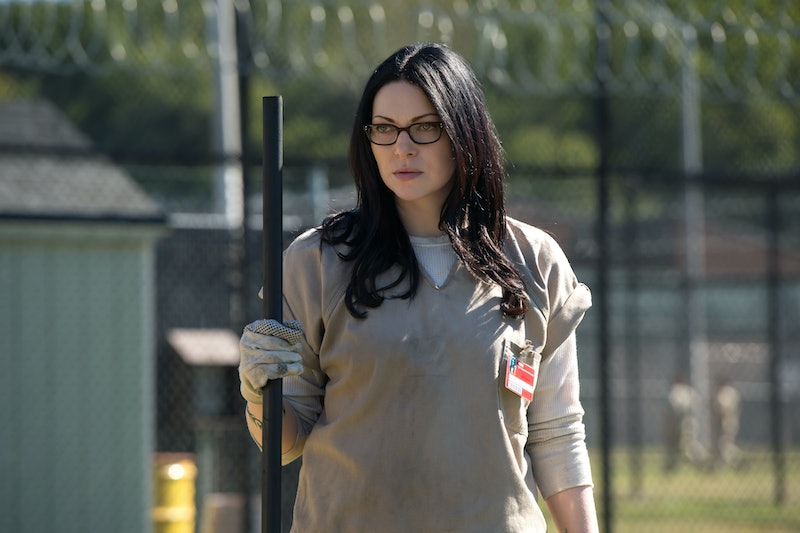 I'll admit it: The final moments of Orange Is The New Black Season 3 left me a little puzzled. [Spoilers ahead.] There was that dialogue-less sequence of the inmates breaking out and going swimming, while Alex Vause (played by Laura Pepron) was left alone with a very evil corrections officer. But, who is Aydin and what could he want with Alex? Well, the answers lie in Episode 8 (kinda), when Aydin (played by Juri Henley-Cohn) first appears. Alex's Season 3 flashbacks reveal more of her criminal past and, if you remember, Aydin was there as one of her former boss Kubra's associates — he also shot and killed her friend Fahri. Kubra spared her then, but has Aydin been sent to kill Alex now?

Aside from having a lot of hate-sex with Piper, Alex spends most of Season 3 being paranoid about Lolly staring at her. Piper tells Alex it's her imagination, but upon further investigation, Lolly is definitely keeping tabs on Alex's habits and whereabouts — as well as well as recording them in a notebook. Alex immediately suspects it could be crime lord Kubra out for revenge. In the end, Lolly is harmless, but Alex is right about one thing: Kubra is pissed. Viewers get confirmation of this when Aydin shows up as a corrections officer at the end of the episode, seemingly to take her out.

So, what else do we know about this mysterious character and what he might do to Alex? Here's what I've been able to gather.

As we see in Episode 8 "Fear and Other Smells," Aydin will quietly kill someone without warning and right in front of a delicious sandwich. In the Season 3 finale, he also sneaks right into the greenhouse without Alex or anyone else knowing. What a crafty fellow.

Alex and Fahri have an argument, in which they bet $5 on whether Kubra will kill them. After he shoots Fahri, Aydin tells Alex, "I guess you owe him $5." He has crazy powers of observation and a sense of humor. Dangerous.

3. He Knows How To Get His Way

Aydin takes advantage of Litchfield's prison staffing troubles to sneak right in and get hired as a CO. And, unlike CO Charlie Coates, Aydin didn't need to get the job by bringing in red velvet donuts.

4. You Do Not Want To Be Left Alone In a Greenhouse With Him

Poor Alex. I can see a number of things happen here: 1. Aydin kills her, point blank. 2. He extorts her for money. 3. He attacks her. 4. She bashes his head in with the rake. 5. He takes a step toward her, but steps on a rake, and then gets locked in a loop of stepping on rakes, a la Sideshow Bob on The Simpsons. (Come on, I can dream about the last one).

5. The Actor Has Been In Other TV Projects

As the Internet ponders Alex's fate until Season 4 debuts, let's appreciate the actor who plays Aydin. Henley-Cohn has also starred in American Odyssey this year and Believe in 2014. So, we know he's pretty talented even outside his character's fictional world of drug smuggling and killing.

It looks like we'll have to wait until Season 4 to find out more about Aydin and what he does — or doesn't do to Alex. But, for now, let us ponder the fate of another OITNB fave, because Season 3 was cruel to the ones we love.