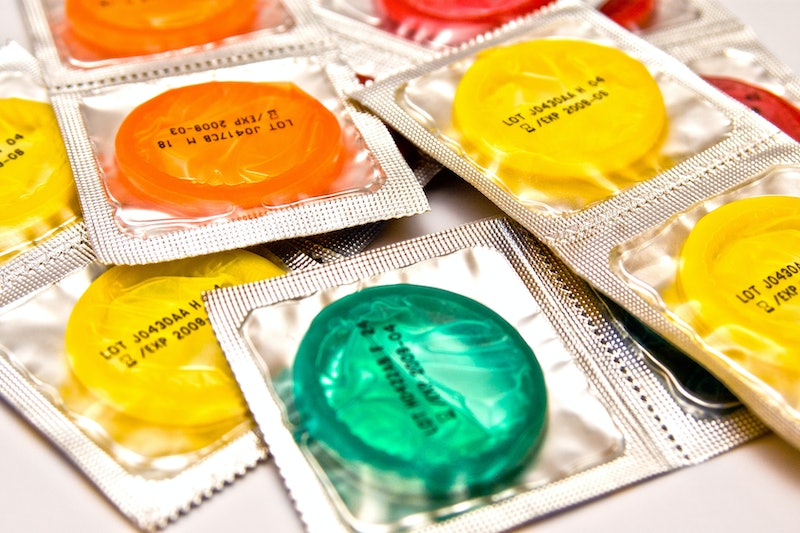 Picture this: It’s a Friday night and you have just met someone who looks like a divine cross between Benedict Cumberbatch and Ruby Rose. They are hot, funny, sexy, and OMG, you just can’t wait to get them naked in your bed. So, there you are, getting it on, and you reach for the condom and once it's on it begins to glow green. Suddenly the party is over. Why? Because thanks to an invention by students at Isaac Newton Academy in Illford, condoms that glow when they come into contact with an STI is about to be a thing, and a condom that glows green means there’s chlamydia to be had.

As part of the TeenTech awards, the students created S.T.EYE, a condom that has layers of molecules in it that can detect bacteria associated with the most common sexually transmitted infections out there. Depending on what virus the condom attaches itself to, you could be looking at a glowing green condom for chlamydia, a yellow condom for herpes, purple for HPV, and blue for syphilis. No glowing, means you can breathe deeply and get back to business. Of course this method of finding out if you have an STI shouldn’t replace regularly testing, but it can at least give you heads up as to what might be going on with your partner, who may not be on the up and up with the regular STI tests.

Although this idea is, for lack of a better word, brilliant, it’s still in its infancy, so it might be some time before you find these glow in the dark condoms, that were conceived by 11- to 16-year-olds mind you, in your neighborhood Duane Reade.

But condoms that glow in the dark as a means to detect STIs aren't the only sexual health innovations out there. Here are four other things that are bound to make your sex life happier, healthier, and way easier than it’s ever been before.

Planned Parenthood wants to make STD testing easier and less embarrassing for everyone. Although no one should be embarrassed about keeping their sexual health in check, some people are and that’s OK! It’s for those people that the app Planned Parenthood Direct was created.

The app allows people to log on and order lab kits that will test for chlamydia and gonorrhea. Although it costs $149 (which could be more than you’d pay during a doctor’s visit, depending on your insurance), it allows you to retrieve your urine sample, send it back to the lab, then get your results via the app. If you have a positive result for something, you’ll receive instructions for your next move in regards to treatment.

Being able to test yourself for the two common STDs out there in the privacy of your own home really makes it so no one has any excuse not to stay on top of their sexual health.

Because sexual health is also about protecting yourself from sexual assault and reporting it should it happen to you, Callisto has made the whole process a bit easier.

Created by Sexual Health Innovations, Callisto allows victim to report their assaults online, submit the report or save it with a time stamp, if they prefer, and even see if other survivors of sexual assault have reported the same assailant. And while the victim will be notified of other reports of their assailant, no one else has access to the database, therefore keeping privacy a top priority and shielding against false reports. The hope is that survivors of sexual assault will feel more comfortable coming forward if they know they’re in a safe space with other survivors, and they get to be anonymous.

3. Service That Let’s You Tell Your Partners Your STI Status Anonymously

If you’ve ever had to sit down and tell your partner that you have an STI, then you know how hard it can be. It’s an awkward situation and one that no one wants to deal with EVER. But since condoms aren’t a 100 percent and things can happen, having to let your partners know what’s going on with you is sometimes a must. But if you don’t want to have that chat, although you know it’s absolutely your responsibility to let your partners know that you’ve found out you have an STI, then you can turn to So They Can Know.

So They Can Know is a site that allows you to send an anonymous email or e-card to your partners to let them know that they may have been exposed to an STI and should get tested. At the moment, you can only inform your partners if you have chlamydia, gonorrhea, or trichomoniasis, because these are the most common and curable. If you’ve possibly exposed your partner to HIV, which is still incurable despite the strides that have been made to find a cure, then that’s something you really need to do in-person.

Although talking about sex and asking questions about sexual health can be tricky at any age, it’s teenagers who have the hardest time with it. So as to make it easier for them to communicate their concerns and ask their sex-related questions, several services allow teens to text local health professionals to get all the help they need. From Ask Brook to Ask WES to Planned Parenthood’s live online chat system, being able to contact a sexual health care professional has become easier than ever.

More like this
The 19 Best Tweets & Memes About Bisexual Awareness Week
By Lexi Inks
26 Ghost Story Podcasts To Get You Ready For Halloween
By Jessica Booth, Mia Mercado, JR Thorpe and Emma Carey
20 Smart Devices Under $35 That’ll Change The Entire Vibe Of Your Home
By Emma Carey
Why TikTok Is Flooded With Controversial Videos About "Pick Me Girls"
By Courtney Young
Get Even More From Bustle — Sign Up For The Newsletter