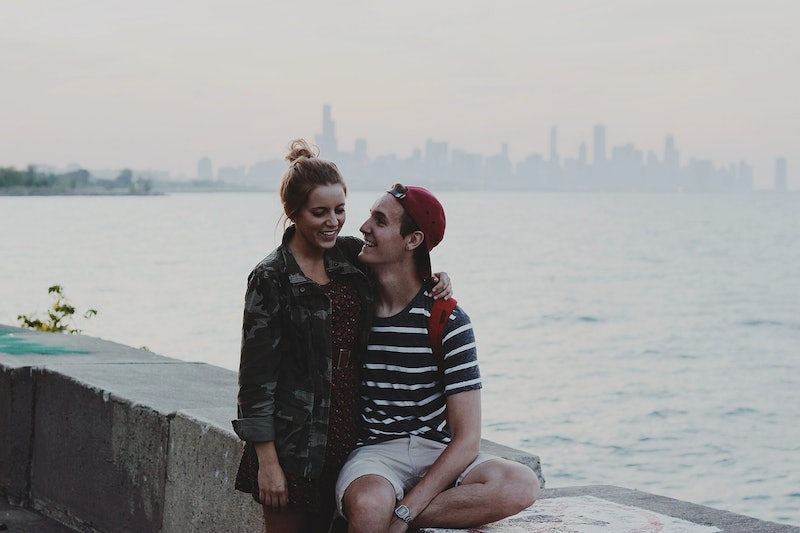 We've all been there: It's time to call a spade a spade, and by that I mean call the person with whom you spend a good deal of your free time your boyfriend or girlfriend. It's different for everyone — some like to drop the B or G word after three weeks, and some prefer more like three months. Or three years. Whatever works. In any event, at some point it's likely that you or your partner will decide it's time to put a label on it (not to be confused with putting a ring on it), at which time the two of you will have the defining the relationship conversation. And it might go really well, if the two of you are on the same page. It's also possible that one of you will be ready to define it and the other will feel a little less label-happy. Either way is OK, and I believe in giving your partner the space he or she needs (within reason, of course — I also believe in you doing you).

I have a friend who started dating someone a few weeks ago, and at two weeks, he was like, "Look, we can call each other 'boyfriend' and 'girlfriend,' or we can waffle around for another two or three months, but I like you, and it's clear we have something here, and I want to be with you and you want to be with me, so we could also just call each other 'boyfriend' and 'girlfriend' right now. Up to you." This is a pretty unorthodox approach, but my friend really liked it. And now, after a few weeks of dating, she has a boyfriend.

Basically, the terms "boyfriend" and "girlfriend" can be as serious as you make them. That being said, there are right and wrong ways to have The Talk; as such, try to avoid these 10 things.

2. Getting Ahead Of Yourself

Don't talk about marriage. Or kids. Or anything other than whether the two of you want to define your coupledom, really. Keep it simple.

Now is not the time to air your grievances. Again, keep things simple. Also, if you're feeling itchy to tell this person what's wrong with them, that is a very real sign that perhaps you should not be this person's girlfriend, but rather should be peace-ing out. Just saying.

We all come into relationships carrying our own baggage. Maybe you're ready to slap on a label and he or she is not. That is OK. Don't jump to conclusions about what kind of person they are or how they feel about you. On the flip side, if the person you're seeing is in a rush to call you their girlfriend and you're not ready, be gentle with yourself. You'll come around — or you won't. If you don't after a while, you'll probably come to know it's not right for you and move on.

6. Confusing The Talk With The Exclusivity Talk

Just because you're going steady doesn't mean this person is your boyfriend or girlfriend. There are lots of talks in a relationship. This particular talk is just one of them.

Slow your roll. One step at a time here.

8. Swallowing What You Need To Say

Although it's probably wise to avoid too much all at once, I am always all for expressing yourself. Tell your gal or guy what you want and need. It's never a good idea to hide your real feelings, so be sure that you're being open and honest while you're having this talk, and not suppressing your true feelings to look cool or whatever. That's boring, and it'll make you feel awful — plus, it's not fair to your partner.

Don't assume you are already this person's girlfriend. You might take for granted that the two of you are a couple, but if you haven't had The Talk, you might want to check in — even if others have assumed that this person is your boyfriend or girlfriend, and even have introduced him or her as such.

On the other hand, sometimes it's just obvious that you and your honey are an item. It's just understood. One day she'll introduce you as her girlfriend, or you'll introduce him as your boyfriend, and maybe the two of you will catch each others' eyes. Maybe you'll wink. Maybe you'll walk off together hand in hand into the sunset. This is rare, but it can happen. Or so I hear.

More like this
TikTok's Voluntary Celibacy Trend Has Sparked A Movement
By Lexi Inks
The 3 Zodiac Signs Most Likely To Get Married Later In Life
By Kristine Fellizar
4 Zodiac Signs That Will Take Forever To Admit They Like You
By Kristine Fellizar
Paris Hilton & Carter Reum’s Relationship Timeline Includes A Surprise Baby Boy
By Bustle Editors
Get Even More From Bustle — Sign Up For The Newsletter
From hair trends to relationship advice, our daily newsletter has everything you need to sound like a person who’s on TikTok, even if you aren’t.