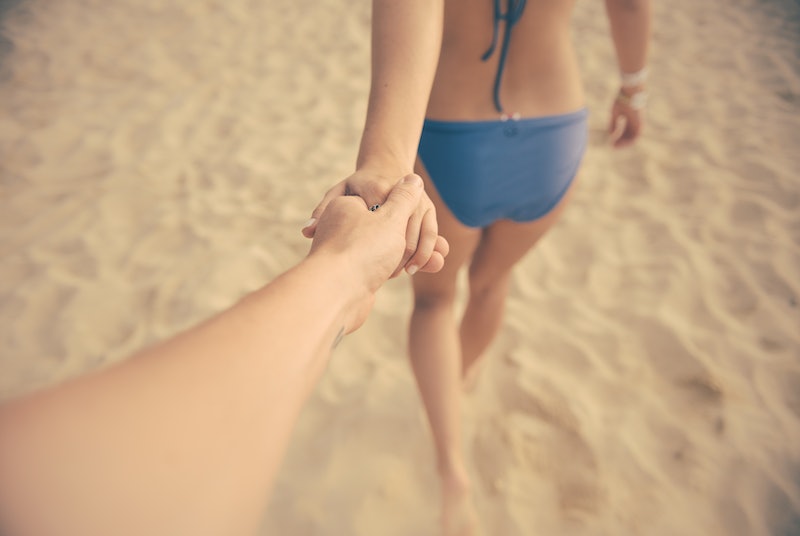 We’re always hearing that we could be having better sex, a better orgasm, or a better relationship. But how often do we hear the nitty-gritty of how we can actually better understand our deepest desires and most embarrassing questions? Bustle has enlisted Vanessa Marin, a sex therapist based in San Francisco, to help us out with the details. No gender, sexual orientation, or question is off limits, and all questions remain anonymous. Now, onto today’s topic: how to ask to dominate someone.

Q: I'm a woman and I’m interested in exploring domination and submission in my relationship with my boyfriend. In the articles I’ve read about it, it’s always the woman who wants to be the submissive one, but I actually want to be the dom. My boyfriend and I have only been together a few months. He's a bit on the shy side, and I don't think he's ever done anything like this before, so I'm not sure how to approach it with him. To tell the truth, I haven’t had a ton of experience with it either, but it’s something I’ve felt turned on by for a very, very long time.

A: Thanks for the question! I’m so glad to have the opportunity to address female dominance, since you’re right that most people tend to think of the male as the dom in the dom/sub equation (most likely due to 50 Shades, and, you know, the patriarchy). Let’s go over what you need to know to successfully start your first dominant-submissive relationship.

Domination and submission have a lot of different meanings, so your first step is to learn more about the possibilities. Power play — a broad term for dominance and submission — encompasses lots of behaviors and arrangements. On one end of the spectrum, you have something as simple as one person being in control during one particular sexual encounter. On the other end, it might be one partner completely dictating every aspect of the other person’s life. Power play can also include bondage, pain, humiliation, contracts, and servitude. I suggest checking out Michael Makai’s book, Dominance & Submission: The BDSM Relationship Handbook for an in-depth look at how this fantasy can play out in the real world.

2. Figure Out What You Want

Once you’ve done some research, you’ll want to try to get more clarity on what you’d actually like to try out. You don’t need to have every detail of your exact fantasies figured out before you start experimenting (plus, what you’re into may change as you get experience!), but you want to have a solid idea of what you’re interested in exploring.

I’d suggest you break your desires into two separate lists: activities that you definitely want to try, and ones that would be fun but aren’t as central to your fantasies. For example, you may really, really want to strap your boyfriend down to the bed and have your way with him. You might also want him to wear a ball gag, but not feel quite as enthusiastic about that detail. Then, from the list of “not central, but would be nice” items, pick one that would feel like a fun place to start. Another way you can do this is by listing out all the activities you’d like to try, then putting them in the order that you’d like to experiment with them in. Drilling down to this level of detail will be helpful for your next few steps.

At this point, it’s time to talk to partner about your desires and ask him if he'd be willing to join in on the fun. Since it seems like your boyfriend is on the timid side, I’d suggest asking him to do one of the tamer items on your “would be nice” list, or starting with the first item on your “order of experimentation” list.

The next time the two of you are lying in bed together, say to him, “I’m having so much fun sleeping with you. You make me feel so comfortable and so hot at the same time. Would you ever be interested in doing [fill in the blank] with me?” Share any details that he might need to know about what that specific fantasy entails. For example, “I’d like to handcuff you to the bed and prevent you from touching me the entire time.”

The only exception to this advice would be if this is more of a full lifestyle change for you. If you’re wanting to go all-in with a dominant-submissive relationship, I’d suggest putting your cards out on the table with your boyfriend. Say something like, “I’ve realized that a dominant-submissive dynamic is central to what I need in a relationship, so I wanted to be honest and see if that could be a possibility with you.”

It's easy to want to dive head-first into indulging in your fantasies. After all, it's a fantasy you’ve had for a while, so it probably feels thrilling to you! But it’s smart to try to take things slow, especially if your boyfriend is hesitant and/or your fantasy is complex.

Before you act out the first piece of your fantasy, agree on a safeword. This is a word that each of you can use at any point to let your partner know that you need to stop. It shouldn’t be a word you would use during sex normally, so things like “no” or “stop” are not good safewords, especially when you’re playing with power dynamics! Pick something like “umbrella” or “window.” Respect the safeword at all times!

After you try out one of your fantasies, make sure to talk about how it went. Let your boyfriend know that he can bring up concerns at any point, or change his mind about what he feels comfortable doing. One of the interesting things about properly set up dominant-submissive relationships is that the submissive actually has the control. They’re the ones ultimately deciding which activities are and aren’t on the table. Knowing this may help your boyfriend feel more at ease!

5. Figure Out If This Is A Deal-Breaker

In the last few paragraphs, I’ve given you advice that assumes your boyfriend will say “yes” to your invitations. Unfortunately, there is a very real possibility that he could say no to any or all of your requests, or change his mind once you’ve gotten started. If your boyfriend decides he’s not interested in power play at any point in your relationship, you're going to have to spend some time thinking about whether or not your dominant-submissive fantasy is a deal-breaker for you. This is a position that anyone with a fantasy (the vast majority of us!) is going to be placed in at some point in his or her life. You’re going to have to ask yourself, “what’s more important — being with my partner and letting go of this fantasy, or finding a partner that has more compatible sexual interests?”

When faced with this difficult decision, a lot of people will abandon their desires because sexual fantasies don’t feel like a “good enough” reason to end a relationship. Unfortunately, your fantasies are a powerful part of your sexual identity, and they’re not always easy to cast by the wayside. If you betray such an integral part of your sexuality, you may end up in a position of resenting your partner. I think the best way to consider the “deal-breaker or not?” question is to imagine you will be with this person for the rest of your life, and that they will never change their minds. Going to this extreme will help you get a true sense of whether or not this fantasy is something you can or can’t forego.

Wishing you the best of luck in starting this exciting journey!