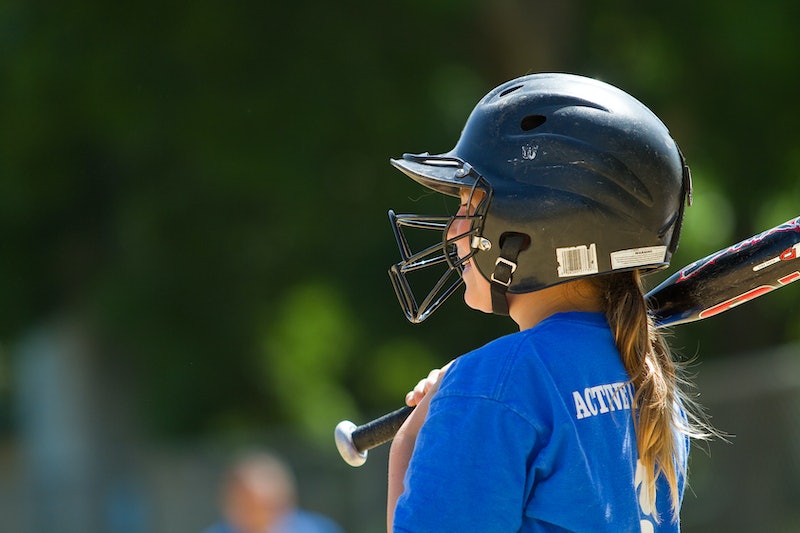 Usually teen prodigies make me uncomfortably aware of how little I've accomplished in my 22 years on this earth, but sometimes, they're just so cool I don't even care. Melissa Mayeux, the teen who might become the first woman in Major League Baseball, is an example of exactly that. It helps, of course, that I'm so uncoordinated that every attempt at playing that particular sport has ended in being smacked in the face with a baseball, but my point still stands.

According to Jezebel, Mayeux is currently a shortstop on the French junior national U-18 team, as well as the senior national softball team — which, for most 16-year-olds, is enough to brag about for years to come. Your new teenage hero, however, made history when she became the first woman added to the MLB's international registry. That also means that she's eligible to be signed by an international Major League Baseball team as early as July, NPR reports. Although teams will most likely wait until she's at least 18 years old to sign her, it's a pretty huge step forward for a sport that is second only to football in its gender division.

Unlike sports like lacrosse, soccer, or swimming, baseball is still almost exclusively dominated by men by the time players reach high school. As TIME noted in a 2014 article on the subject, the National Federation of State High School Associations has no record of any female baseball team in the United States, most likely because softball is considered the "girly" equivalent. Sadly, many girls follow the same trajectory sports writer Minda Haas described in a roundtable discussion at SB Nation. "Growing up I strongly preferred baseball," she said. "I only played softball when I aged out of the local baseball league where girls were allowed."

That's what makes Mayeux's eligibility so historic. Even though she probably won't be signed this year, NPR points out that she may very well end up playing for an American college team eventually, and the player herself doesn't seem to discount the possibility. "I would like very much to continue playing baseball in France until I'm 18 years old," she told MLB.com, "and then have the ability to leave for university or another opportunity abroad."The operative word there? Baseball. Not softball. As awesome as that particular sport may be, the two are similar but not equivalent, and it's time we stopped treating them as such. With that in mind, here's hoping that Mayeux has the same effect on baseball as these other women who flauted convention and followed their (extremely athletic) hearts:

Did you think athletic women didn't start standing up for themselves until the 1900s? Hell to the no. Mary Queen of Scots scandalized the nation when she played golf in 1567, mere days after her husband was murdered.

Oakely defeated famed marksman Frank Butler in a shooting contest in 1875. She later married him, kicking off a long career in badassery.P.S. Can we please put her on the $10 bill? PLEASE???

In 1902, there was no rule prohibiting women from entering the World Championships in figure skating, because such a thing was unthinkable. Can you imagine everyone's faces when Syers used the loophole to enter and placed second overall?

Cintrón was far from the first female bullfighter, but she was the first to be taken seriously. Her life was too freakin' awesome to detail in just one article, but look her up. Where is her biopic?? Are you listening, Hollywood?

It isn't just athletes who face discrimination in sports. Palmer became the first female NFL referee to officiate a game in 2006.

You had to know she was coming. Davis is one of two girls who played in the Little League World Series last year, and she was the first Little League player to cover Sports Illustrated , probably because she can throw a baseball at a speed that would get you pulled over by the cops.