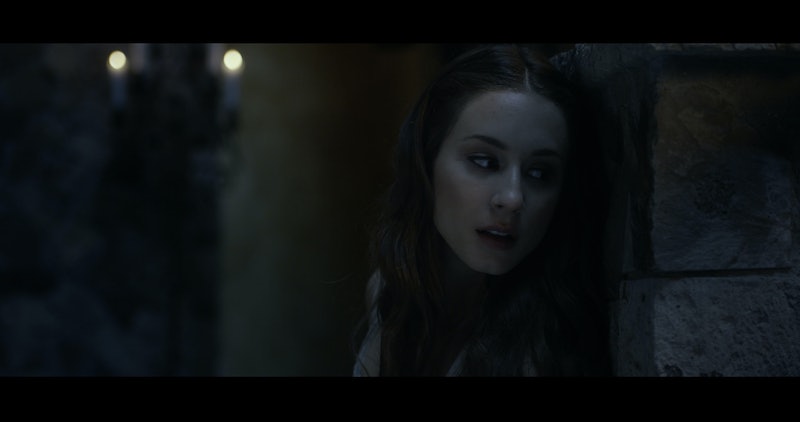 "What's in a name? That which we call a rose by any other name would smell as sweet." This Romeo and Juliet quote is one of William Shakespeare's most well-known lines, but a new short film is about to change your perception of the phrase. Premiering on Wednesday night at the Frameline39 San Francisco LGBTQ International Film Festival, Still A Rose presents the Romeo and Juliet balcony scene through four different couples, adding gender and sexuality inclusivity to the classic play. In the film, directed by hazart, Pretty Little Liars star Troian Bellisario plays Juliet, but she's not the only one — nor does she confess her to love one sole Romeo. Instead, Still A Rose shows four different couples as the star-crossed lovers, bringing new diversity to the story that while common in theater, is new to film, and hazart and Bellisario share what opportunities and challenges that re-telling presented.

"It was a lot to shoot, and we really only had two nights," Bellisario, who plays Juliet in two of the pairings, explains. "In the rehearsal process, we really had to find a choreography that was shared between all the different couples so that we could film it the same way." The results of this are evident throughout Still A Rose, as the length of time between shots varies. Sometimes, one couple stays on screen for many lines, while at other points the film very quickly cuts between all four pairs, creating an interesting effect that lends to its theme of inclusivity. "We had to have the same shots because they had to be sort of interchangeable, so it was something that was very interesting...to deal with two different Juliets and two different Romeos, and there being a shared language that the different couples could have while maintaining the different dynamics and different energies," the actress says.

Still A Rose actually got its start when hazart saw another inclusive take on Shakespeare. "We were inspired by a friend and theater director, Casey Kringlen, who put up an LGBT take on the entire play of Romeo + Juliet," hazart says. "After that performance we thought that in short form, and using tools of cinema, we could achieve a poignant and beautiful short film that seemed to have never been attempted. The LGBTQ struggle for equal rights and respect is a cause we have commented on before and believe in deeply. We thought, what better way than with the most famous love story ever told."

Beyond the challenges of filming the scene multiple times with precise movement and language, a lot of thought went into the editing of Still A Rose, lead by Jeremy Floyd, to ensure it reached hazart's vision. "There were certain shots and transitions that we preconceived before shooting and we always intended to overlap and double characters' voices, but we didn't know line-for-line who would be on screen," hazart says. "Going into editing we were conscious of how much each couple is on screen, but we shot the entire scene with each couple so that we could have the freedom to cut to any performance at any moment. Lucky for us we had four great couples to cut between."

For the actors, that meant never being quite sure when their various reactions and readings would be used, as Bellisario says, "It was really just about being present with Juliet in response to her different Romeos. How was Tinuke's Romeo different to me than Brandon's Romeo?" She continues, "It was interesting because that’s ultimately not up to me...In one take, the camera could be on me and I could be reacting to Tinuke, but they might pair it with me and Brandon...That’s up to the filmmakers to decide which sort of reactions they wanted. "

The result of all those decisions is a truly moving film that accomplishes exactly what hazart set out to do: use one of the greatest love stories of all time to show that all forms of love are equal. While both Bellisario and hazart are quick to point out that showing classic plays through this lens is common in theater, it does have a different effect on film and may introduce a totally new audience to the concept. "To put it on film I think really challenges people in a new way, because when we go to theater we’re a lot more forgiving for that," Bellisario says. "For some reason, seeing somebody full-body on stage in front of you, if it’s a woman playing a man or a man playing a woman, it’s something that we’re kind of more accustomed to than seeing it on film, and to watch a male say Juliet’s line is something that’s maybe a little bit more challenging when you’re watching it on the screen rather than live."

It may be challenging for some, but that doesn't mean it's not enjoyable and touching. I hope to see similar adaptations of classics in the future, and luckily, that's something hazart is very open to. "We think there is a great opportunity to try and find other scenes in which to do something similar," hazart says.

"There is an entire group of people for whom classic literature doesn’t reflect their identity, and not because it can’t, as we believe we prove with this film. Although we don’t have any current plans for other plays or scenes we have had some interest here at Frameline39 on possibly expanding the film to other scenes or an entire play with the same concept...There seems to be a lot of interest and creative opportunities to re-tell classic stories through a queer lens, something we look forward to participating in." In the meantime, we have Still A Rose, premiering Wednesday night at 7 p.m. at the Roxie Theater in the Bi Candy Program at the Frameline39 San Francisco LGBTQ International Film Festival.