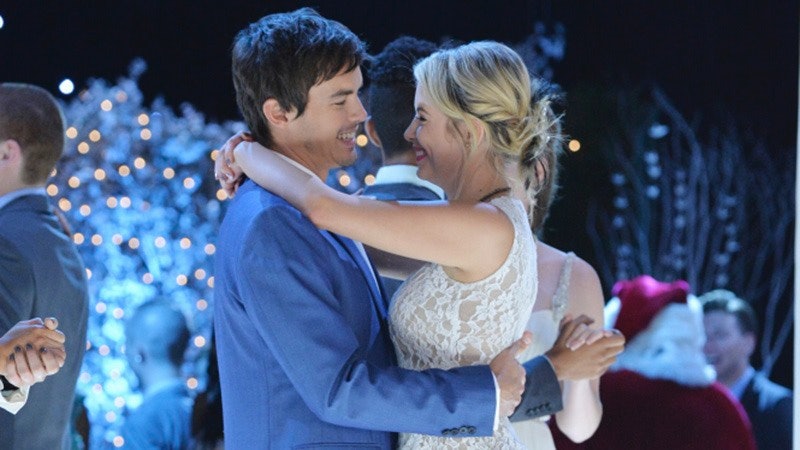 It's no secret that fans of ABC Family's Pretty Little Liars are amazing sleuths who manage to pick up on each and every little clue that the cast and crew give them. Whether it's diving deep into creator I. Marlene King's Twitter account, or obsessively refreshing Instagram for any new Charles-as-A leads, fans know that there are always some hints about upcoming episodes on social media. Like this, for instance: On Wednesday, PLL star Ashley Benson's new Snapchat might have hinted at something major about the upcoming season — specifically, Benson's Snapchat might hint that Hanna is getting married in the series, because she's on set... wearing what appears to be an engagement ring. Hanna/Caleb fans: Commence freakout.

In the Snapchat pic (as posted by the Pretty Little Liars Obsessed Tumblr page), Benson showed off a seriously blingtastic ring that looks like it could very well be an engagement ring. Though the picture doesn't give us too much information, it appears that Benson is on the set of Pretty Little Liars, which means that this ring could be part of her costume and not just a part of Benson's own outfit of the day.

Making it even more likely is the fact that Hanna getting hitched on Pretty Little Liars is definitely within the realm of possibility — especially since executive producer Oliver Goldstick stated that one of the four girls will get married when the show jumps ahead four years after the Season 6 midseason finale. Considering Caleb is Hanna's OTP forever and ever, does this mean that Haleb will walk down the aisle in the show's near future? They already have that wedding kiss down...

Sadly, I have to say it, though: As amazing as this could be for Haleb fans, it could also be the worst. If Hannah is in fact the liar getting married, it doesn't necessarily mean that she's marrying Caleb — this show is crazy unpredictable, so it's possible Caleb and Hanna might be broken up when the series picks up again after four years. It would totally suck, yes, but it might make sense from a storytelling point of view — if the girls really are putting A behind them when Season 6 returns from the midseason hiatus, could Hanna have wanted to say goodbye to a person so deeply connected to that painful time?

It wouldn't be the first show to breakup a seemingly endgame couple after a time jump. One Tree Hill broke up Peyton and Lucas after their own four-year time jump, only to spend the next few seasons having the characters fall back in love. If Pretty Little Liars is going the route of One Tree Hill, Hanna may be marrying someone else entirely four years down the line — perhaps a college boyfriend she fell for after leaving Caleb.

Even if Hanna and Caleb aren't the ones getting married in Season 6 — and even if they do breakup — I can't really imagine a world where these two aren't meant to be together. If we're not in for a Haleb wedding and instead in for the worst, then I'm sure that Season 6 will bring these two back together in someway. Haleb is totally endgame, whether Hanna is the liar getting married or not.

Check out the photos below and examine the evidence for yourself!

For even more clues about a Haleb wedding and Pretty Little Liars feels, check out Bustle's new PLL podcast below.