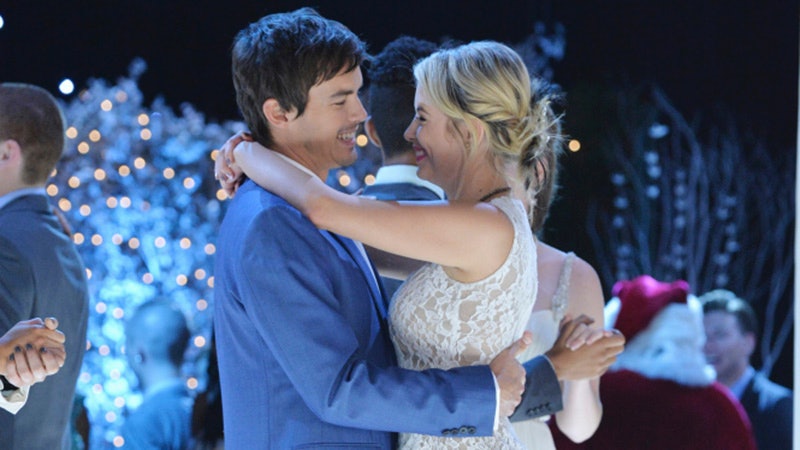 By now, you've probably heard that Pretty Little Liars Season 6 will have a time jump after its first 10 episodes, skipping the Liars' time in college and letting fans catch up with them as adults. Since so much of the girls' future will depend on what happens during the first half of Season 6 and whatever they end up doing in college, it's hard to predict where exactly we'll find them after the jump. Luckily, some of the series' writers have given us a few clues that suggest some pretty exciting outcomes, like, say, Hanna and Caleb getting married. OK, maybe "pretty exciting" was a bit too mild of a description. Obviously, a Haleb wedding would be the single best thing that could happen to the 'shippers who have stuck by them through every single up and down.

But let's not get ahead of ourselves — first, we need to talk about the clue that suggested this life-reaffirming prospect. Shortly after the explosive Season 5 finale, ET Online asked PLL writer Oliver Goldstick if there could be a wedding next season, and he responded, "Will one of them be married? Mmmm…. I'd say yes." Just like ET, I think that if any 'ship is married post-jump, it'll be Hanna and Caleb, because when you think about it, they're the only couple that makes sense. (And I'm not just saying that because they're my OTP.)

You can pretty much prove it through process of elimination. Things have been very rocky for Spencer and Toby as it is, and if any Liar is going to wait a while before getting married, it's Spencer. She meticulously plans and overthinks even relatively small things, so I don't think she'd feel ready to get married shortly after graduating college. Spencer also has big ambitions for her future, and I wouldn't be surprised if she's still in school getting a Master's degree or something similar when Season 6 picks back up. Ezra and Aria were broken up when we left them in Season 5, and though I'm sure they'll get back together, their relationship has been far too tumultuous to tie up so neatly after a time jump. I think they'll be the couple we watch find their way back to each other in Season 6B. As for Emily, she's currently single, having ended things with Talia after struggling to get over Paige, and we're still not quite sure where things stand with her and Alison. So unless she has a whirlwind relationship that we don't even get to see during the time jump, it's very unlikely she's the married Liar.

Of course, that leaves Hanna and Caleb, a 'ship that was undoubtedly at its strongest point before Season 5 ended. Once Caleb returned to Rosewood and got back together with Hanna, things between them only got better. Throughout Season 5, he and Hanna helped each other heal old wounds, stood up for one another, and just proved that they're ride or die, over and over again. In "Welcome To The Dollhouse" they didn't even interact, but still managed to show their love for each other multiple times. PLL made sure we know just how strong their relationship is, and there must be a reason for that.

Of course, that doesn't mean everything will be sunshine and rainbows for Haleb in Season 6. In fact, another interview that hints at a wedding after the time jump also suggests a rocky path to marital bliss. Alloy Entertainment asked executive producer Joseph Dougherty "if if there’s any semblance of hope for any of the couples in Season 6," and he basically said that the traumatic experience of the dollhouse could have both good and bad effects on the 'ships. Then the website asked if he was rooting for any specific 'ship, and he responded with, "I don’t think I want to go there…[Laughs.] However, I can tell you this: What we’ve been planning? Everyone wants to write it. The bad news for the fans is that we plan to make it interesting." Seriously, who wouldn't want to write a Haleb wedding episode?

Yes, "make it interesting" probably means that if he's referring to this wedding, Hanna and Caleb will have to deal with some drama first. But that's OK. That just means we'll get to watch them make up again.

And for once, we won't have to worry about what comes next. Their happy ending will be on its way.

More like this
The 'PLL: Original Sin' Creators Say A’s Identity Will Be “Very Clear” By The Season Finale
By Alyssa Lapid
Every Horror Movie Reference In The 'PLL: Original Sin' Premiere
By Alyssa Lapid
Josh Peck Shows Love To Jennette McCurdy After Her Shocking 'iCarly' Revelations
By Radhika Menon
'Yellowjackets' Just Announced Who’s Playing Adult Van & It’s Perfect
By Gretchen Smail
Get Even More From Bustle — Sign Up For The Newsletter