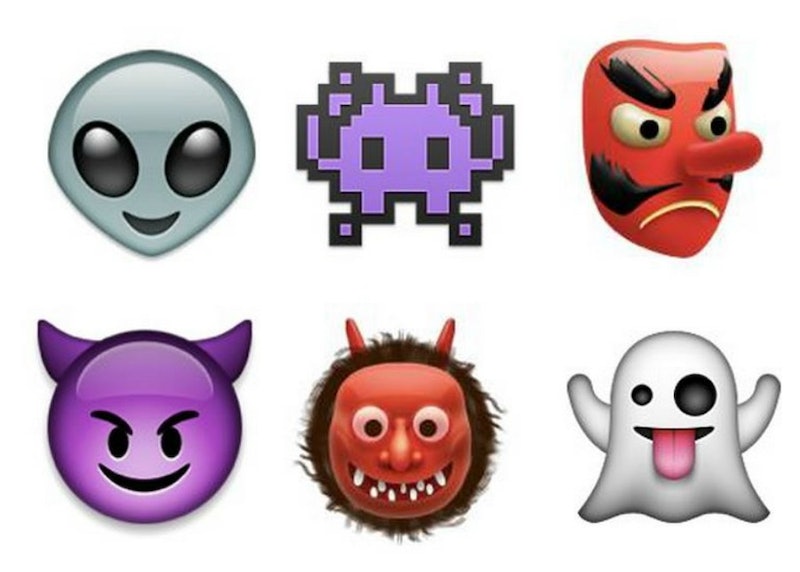 Emoji tend to travel in packs, so perhaps it's no surprise that one of those packs is somewhat… supernatural, as it were. And if you've ever found yourself wondering, “Gee, what do all the monster emoji mean?” — good news! I've done the heavy lifting for you. Because goodness knows we could all use a few more Japanese Ogres in our lives, right?

The monster emoji differ from other standard emoji sets — all those colorful heart emoji, for example, or the nine cat emoji — in that they're not generally all grouped together in the standard emoji menu. Many of them are; the aforementioned Ogre, for example, is placed right next to the Japanese Goblin. But you kind of have to dig around for some of them, and even then, it's not always clear exactly what they're supposed to represent.

But you know what? As weird as they are, I'm glad all these little monsters in my pocket exist. They may not always be terribly useful, but they add a certain je ne sais quoi to our digital conversations — and if we're feeling really creative, we can even use them to play a game of Space Invaders with the person on the other end. Not too shabby, right?

So: Here are the official names and meanings of all nine of those fun little monster emoji, because why the heck not? Rawr!

Also known as the Happy Devil, Devil Horns, Devil, Red Devil, and Purple Devil emoji (its color changes depending on which device or operating system you use), this little guy definitely looks like he means business. Between the horns, the furrowed brow, and the disconcerting smile… well, let's just say you don't want to mess with him. He looks considerably more evil in the Android version (seen on the right here), although I'm not entirely sure why. Possibly ways to use it include: As a replacement for the word “devil” (“I had a Smiling Face with Horns time trying to get home because of rush hour traffic today”) or to indicate plotting and/or scheming (muahahahahaha).

The Imp is described by the Emojipedia as a “less-evil version of a demon;” he's also “cheeky and mischievous,” with his roots in Germanic folklore. Personally, I just think he looks like the Smiling Face with Horns' pissed off cousin. Alternate names include Sad Devil and Purple Goblin emoji, although (again) it's only purple in the iOS version. The Imp can be used in pretty much the same situations as the Smiling Face with Horns — but it's probably best reserved for times of angry displeasure. I like to imagine him shaking his tiny purple fist at the sky while letting out a mighty-yet-squeaky little roar.

No, not Jon Snow's beloved direwolf. The Ghost emoji, sometimes known as the Halloween or Ghoul emoji, is… well, a ghost. It might even a Halloween costume, although whether or not we're seeing a bed sheet or a disembodied spirit remains to be seen. It looks kind of derpy in the iOS version, so I'd be more inclined to use it as an indication that I'm sticking my tongue out at something. 2 spoopy, you guys. 2 spoopy 4 me.

Like the Ghost emoji, the Jack-O-Lantern is sometimes referred to as the Halloween emoji; it's also called the Pumpkin and/or Pumpkin Head emoji, though, so I think it qualifies as a monster. Use it for all your Nightmare Before Christmas-related emoji needs — or for Pumpkinhead fans, although Pumpkinhead admittedly doesn't look much like a pumpkin.

This one? It is my favorite. Because, I mean… how can you not love this guy? The iOS version looks like something out of Where the Wild Things Are, and that is the BEST. Anyhoo, the Japanese Ogre may also be called the Scary Face, Scary, Red Monster, or Oni emoji; according to the Emojipedia, he's specifically a Namahage, creature who generally makes his appearances during New Years' rituals. His job is to ward off evil spirits from people's homes, because hey. Someone's got to do it, right?

Honestly, I don't really know why or how you'd use the Japanese Ogre emoji in everyday conversation. I suppose he could fill in for the Smiling Face with Horns or Imp… but he's so much cooler than that.

I like to think of the Japanese Goblin, aka the Red Mask or Long Nose Face emoji, as the Japanese Ogre's slightly more comical younger brother. The Android version looks more like a crotchety old professor than a supernatural being, so don't be afraid to use him as a code word (code emoji?) for your least favorite teacher.

Like most skulls, this one can be representative either of death itself or of feeling dead; however, given that one of its alternative names is the Grey Skull emoji, another perfectly acceptable use for it would be in reference to Masters of the Universe. Because “By the power of Grey Skull emoji!” is one of the greatest sentences in the English/emoji language.

Not going to lie: I find it a little odd that this one is an extraterrestrial alien. As opposed to… what? Sting? But hey, it's also known as the ET emoji and the Alien emoji, so maybe its full title is just making sure it covers all the bases. It's depicted as a “classic little grey man” alien, which I'm sure Agent Mulder would love; however, the iOS version is unexpectedly cute.

What I like about the Alien emoji is that it can be used to indicate a huge variety of things, from actual UFO sightings to just being so out of place somewhere that you feel kind of like an alien. However, it should not be confused for the “alien in a box” placeholder symbol, which appears in older versions of some operating systems when it's asked to display a newer emoji (that is, one that it doesn't support).

What's the difference between the Alien Monster and the Extraterrestrial Alien? Other than the fact that the Alien Monster is thought to be a “video game” alien (hence the iOS's Space Invaders-esque appearance), I have no idea. Either way, though, I like having a tentacled creature as an emoji option. Just, y'know… in case I need to tell anyone that an extraterrestrial being is sucking my brains out through the top of my head or something.