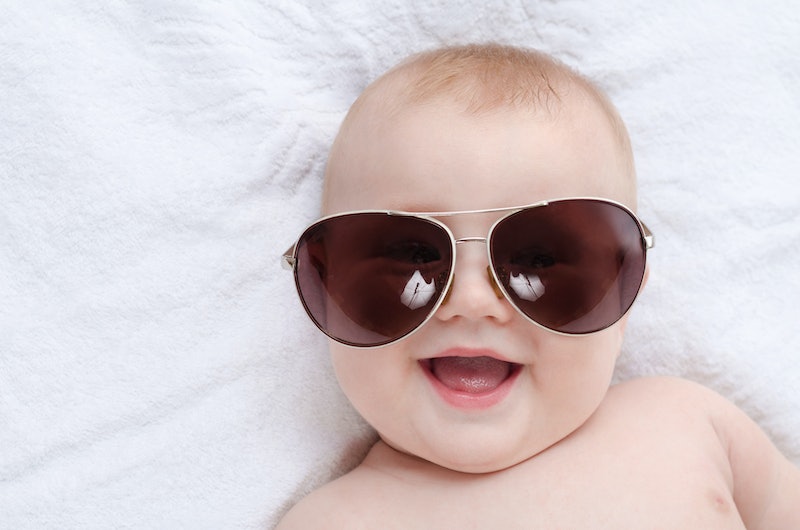 Names can be really interesting indicators of what generation someone was born in. For example, everyone has a grandmother named Marilyn or Frida, but when was the last time you were gushing over a newborn (setting aside the fact that I could end the sentence there and answer right now: Never, because babies are scary) and the mother said, "Yes, this is little Marilyn, she's 11 weeks"? Because naming trends can indicated broader social norms, historians have long studied and tracked the changing nature of the baby naming scene. That's why Abacaba recently released a hypnotizing, moving bubble baby name map that reflects the relative popularity of baby boy's names in America starting in 1880. How have the names we give our kids changed over the past century? And what does that say about us as a society?

This video comes on the heels of a similar one created in April by Abacaba, a company that makes "confusing videos about data and math," featuring the evolution of U.S. girl names. While the mesmerizing videos are really cool to watch strictly from an aesthetic point of view (bright, colorful moving bubbles are always the way to my heart), they're also fascinating sociologically, especially in light of the recent uptick in gender neutral baby names that we've been experiencing. It's possible that the very premise upon which these videos are predicated will soon become obsolete, as girls' and boys' names become less and less distinct.

You'll also notice that as the video gets closer and closer to the modern day, the names in the top 10 start shuffling much more rapidly than they did in the previous century. It seems like parents are moving towards a more creative, less historically dictated view of baby naming, which I think is really cool.

Here's a brief overview of some interesting moments in baby boy naming history, but you should really watch the whole video below. Zone out and just watch the colors if you don't feel like reading anything.

Ah, good old 1888. The Johns and Williams roamed freely, and there was even a steady supply of Alberts. It was the best of times, really.

This is notable because for the first time in 1926, John is relegated to second place in favor of Robert. Ah, that Robert, he'll getcha every time if you're not careful.

Shoutout to the .19 percent of babies born in 1952 who can make My Name is Earl jokse. Also fitting, since the dudes born in 1952 are old enough to be fathers now (and maybe even grandfathers).

Wait, guys — this is so weird. I was born in 1995, and Michael was the most common boys name that year. Flash forward to three weeks ago when I went on a date with a dude named Michael. Crazy, right?

This is the most recent year in the video, and what I think is most interesting about it is that the bubbles are much more evenly sized than they had been in precious years. It seems that the days of an overwhelmingly popular name are coming to a close, in favor of (slightly) more individual names.

More like this
Flip Phones Are Gen Z's Favorite New Nightlife Accessory
By Maria Santa Poggi
Andie From 'How To Lose A Guy In 10 Days' Is A Total Gemini
By Nina Kahn
25 Galentine's Day Games To Play On Zoom With Your Long-Distance Besties
By Mia Mercado
21 Galentine’s Day Memes To Celebrate Your Best Friends
By Meghan Bassett and Mia Mercado
Get Even More From Bustle — Sign Up For The Newsletter
From hair trends to relationship advice, our daily newsletter has everything you need to sound like a person who’s on TikTok, even if you aren’t.