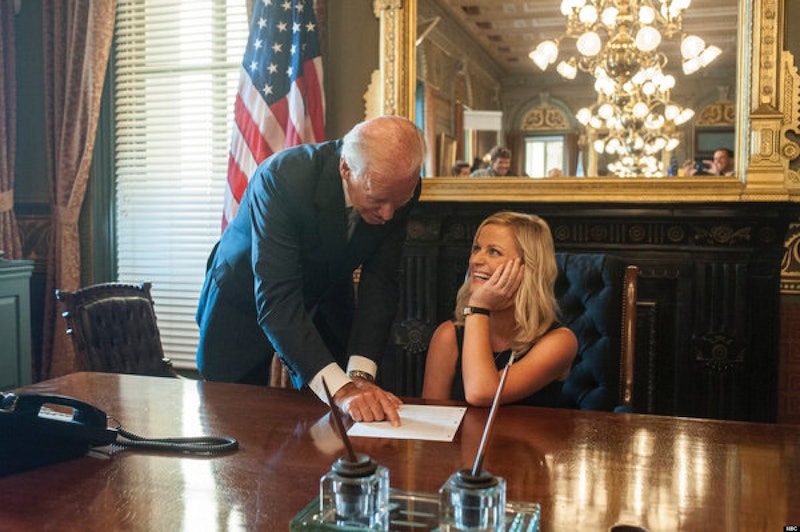 Today is Vice President Joe Biden's 71st birthday, so it seems like a good opportunity to discuss one of his accomplishments that often goes overlooked. We all know him as President Obama's ice-cream-loving, perfect-smiling, second-in-command, but he's so much more than that. He was a Delaware senator from a very young age, ran for president himself twice and most importantly, he's Leslie Knope's biggest celebrity crush.

Yes, Parks & Recreation's most inspiring civil servant of all time is pretty obsessed with Biden, and that says a lot about him. Leslie isn't your average TV character, she's a proud feminist and amazing role model with some pretty high standards. If Biden is good enough for her, you better believe he's qualified to co-run the country.

It's not just that Leslie admires Biden, the way she does many other political figures, it's more that she's really his fangirl. She may be happily married to TV's most endearing geek, Ben Wyatt, but there's still a special, enormous place in her heart for the veep.

Let's take a look back at just some of the times that Leslie has shared her love for Biden. He should truly be honored, because the love of Leslie Knope is the best gift one could ever hope to receive.

THE MOST HOLY OF DAYS

It's marked on her official calendar, so you just know that somewhere in Pawnee right now, Leslie is holding a party in Biden's honor — probably at J.J.'s Diner. Also, I hope you all celebrated "Talk Like a Pittsburgh Pirate Day" appropriately.

His Secret to Success

Not everyone is so lucky, good for you, Joe.

The Power of Persuasion

It takes a lot to make Leslie back down, but once Biden is mentioned, she gives right in.

The Only Celeb That Matters

I cannot stress enough how honored Biden should be. Who cares if Obama picked you to help win an election, Leslie chose you over every celebrity, politician and other human for her sex list.

A Spot on the Quilt

Leslie tried her best to leave him out of her unity quilt, but she just couldn't do it. Her love for Biden is too strong.

One of the best moments in Parks & Rec history is when Leslie finally gets to meet Biden, as her engagement gift from Ben. The entire scene is amazing, but her not-so-subtle attempt at a kiss is easily the highlight.

Thanks to that meeting, from now on whenever Leslie needs a pick-me-up all she has to do is look at her photo with Biden and know that everything will be okay.

It takes a pretty great man to inspire the woman that inspires us all. Happy Birthday, Vice President Biden!