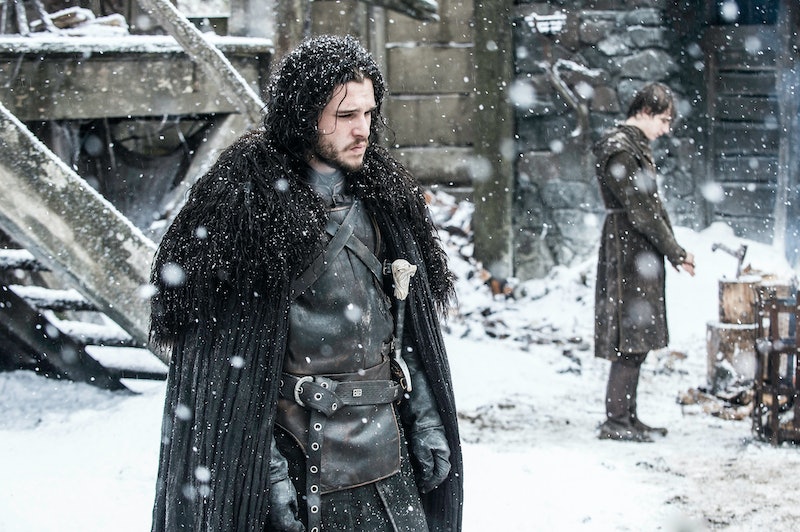 All season long, Game of Thrones has been toying with our emotions by teasing multiple clues regarding Jon Snow's parentage without actually confirming anything at all. So even though we think we may know that Jon is the son of Lyanna Stark and Rhaegar Targaryen, we still don't have any concrete evidence to fully back up this L + R = J theory. Is it frustrating? Absolutely. But it's also given me an excuse to go back and rewatch some of the earlier GoT episodes in the hopes of discovering some new-found clues that further imply Jon's Targaryen bloodline. And while the GoT pilot delivered some very interesting pieces to this puzzle, it's the episode immediately after it, titled "The Kingsroad," that really managed to pique my interest.

It's here that non-book readers get a glimpse at just how little Jon knows about his birth mother. While saying goodbye to his father, Ned Stark, before heading off to join the Night's Watch, Jon asks: "Is my mother alive? Does she know about me? Where I am? Where I'm going? Does she care?" This in itself speaks volumes to the lengths Ned has gone to cover up where exactly Jon is from. Sure, you could argue that he simply didn't ever want to rehash the details surrounding his affair, but there's also a good chance that he continuously side-stepped the topic because he had something to hide… like the fact that Jon is actually his nephew and not his son.

And, of course, who could forget his final words to Jon before parting ways…

We should've realized right then and there that these two would never see each other again. What was it Ned would've told Jon and why was it something that had to wait until later? Maybe he was trying to book them on the next Jerry Springer episode to prove that he is, in fact, not the father. Or perhaps he just thought that kind of epic reveal deserved a long sit-down discussion with lots and lots of wine. Either way, watching this exchange was made all the more heartbreaking now that I know what horrors lie in store. If only he'd just been honest right then and there. Who knows where these characters would be at this point in time?

But that wasn't the only time Jon's mother was brought up throughout the hour. The very next scene saw King Robert and Ned reminiscing about their younger years as they headed back to King's Landing. It's here that Robert mentions Ned's bastard's mother. "Must've been a rare wench to make Lord Eddard Stark forget his honor. You never told me what she looked like." And to this, Ned responds, "Nor will I." So what does this tell us, exactly? Well, for one thing, Robert never actually saw Ned with another woman. You'd think that he might've come across her at some point in time. He was Ned's best friend, after all. And yet, he has no idea who she was.

Sure, there's a chance Robert was simply too distracted back then with his own, um, conquests, to know/care what Ned was up to. But it also could be due to the fact that there was no other woman at all in Ned's life. It's like what Robert and so many others have indicated since then — adultery wasn't something Ned was prone to do even at times of war.

But just in case that alone isn't enough to convince you, when the conversation turned toward killing Daenerys Targaryen before she started "breeding," Ned was clearly put off by the mere thought of it, even though they're the family that was supposedly responsible for killing his sister. (That is, unless Ned knows a different version to this story.) "I'll kill every Targaryen I can get my hands on," Robert promises, to which Ned responds, "You can't get your hands on this one, can you?" Maybe Dany isn't the only Targaryen Ned is talking about here. Maybe one has been right under his nose this entire time.

Want more on R+L=J? Watch this:

More like this
George R.R. Martin Teased That ‘House Of The Dragon’ Is Inspired By The Anarchy
By Grace Wehniainen and Kadin Burnett
'Bridgerton’s Jonathan Bailey & Simone Ashley Just Teased A First Look Of “Kanthony” In Season 3
By Grace Wehniainen, Alyssa Lapid and Sam Ramsden
The 'PLL: Original Sin' Creators Say A’s Identity Will Be “Very Clear” By The Season Finale
By Alyssa Lapid
'The Sandman’s Ending Is A Departure From Neil Gaiman’s Comic Book Series
By Kadin Burnett
Get Even More From Bustle — Sign Up For The Newsletter