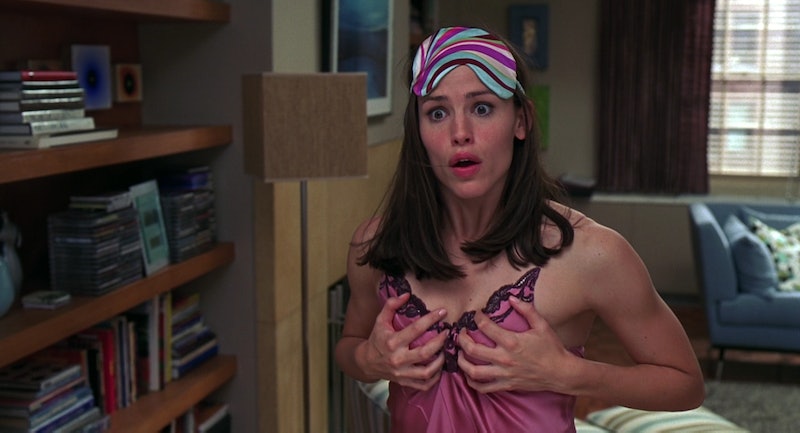 Here's a confession: 13 Going on 30 is one of those movies I did not anticipate liking as much as I did the first time I watched it. I thought it was going to be a Freaky Friday/Big combo or rip-off, but I was delightfully surprised by just how endearing of a film it actually is. It's equal parts golden era RomCom and John Hughes-esque high school angst. It's also nearly impossible not to fall in love for Jennifer Garner as Jenna Rink in this movie. Holy crap is she charming! The film was released when I was a junior in high school, so I was a few years out of the 13 year-old misery, but I could still sympathize with sweet Jenna's desire to to be grown up.

Now that I'm a year-and-a-half away from 30, I live in grown up Jenna's world, and it's even less fun than the movie lets on — though I wouldn't exactly want to go back to being 13, either. If I had my own "wishing dust," I'd probably save myself the debt and get my general ed college classes out of the way with community college or online classes. I would be Scrooge McDuck diving into a swimming pool of golden coins, I tell ya!

If you want even more nostalgia, check out our taste-test of the best '90s lip glosses (and subscribe to Bustle's YouTube for more hilarious videos):

Thankfully 13 Going on 30 is just as sweet of a movie when you're closer to 30 instead of 13. There are a few cringe-inducing moments, but overall it's still a wonderful feel-good movie that will make you want to listen to a lot of Pat Benetar. Here's what I picked up on 11 years later:

2. Jenna Has the Most Heartbreaking Teenage Insecurity

“I don’t want to be original Matty, I want to be cool.” If only she had Rookie to lean on!

3. I Can't Tell If Mean Girls' The Plastics Or Six Chicks Are Worse

There are fewer of the Plastics so I guess that makes them better?

5. Apparently This Advice Has Been Around For Quite Some Time

Ignore the headline, but really everyone does say the 30s are the best years of your life.

6. OK Matty, We Get it, You Have Great Taste In Music

I guess the alt-rock guy was a thing for a while with teen comedies. Cliff Pantone from Bring It On is essentially the high school version of Matt Flamhaff. Also, those pants, I CANNOT WITH THOSE.

That apartment in THAT neighborhood in New York? Even magazine editors couldn't afford that nowadays.

8. There Is A Lot of Sex And The City Influence Going On Here

9. The Exposition In This Movie Is A Little Overkill

It has outdoor space. In New York. He must have had the same realtor as Monica Geller.

12. This Movie Really Slays With The Montages

Makeover montage and a falling in love montage? Just take all of my money, 13 Going on 30, you earned it.

13. I Wish Every Woman Loved Her Boobs As Much As Jenna Loves Hers

She's just so excited to have them. Shouldn't we all.

14. Wow, Judy Greer Was Really On Point With This

She IS always the best friend. Albeit a terrible one in this movie.

15. I Miss The Days I Could Get Drunk On Piña Coladas

I can't handle the sugary hangover or the bloat.

16. It's Sort Of Like The Devil Wears Prada Light

There's an HBIC and a conniving co-worker who steals someone else's work... Anyway, Lucy needs to calm it down with her "Fashion Suicide" nonsense.

17. Mark Ruffalo Dancing To Thriller Is Giving Me Some Danny Castellano Feels

Oh these olive-skinned, dark-haired men and their moves!

18. Lucy Really Is The Worst

This is how she views the world, “You’re thin, you’re hot, you can get any guy you want.” Nope. Hard Pass.

Only in New York?

20. Wendy Correcting Matt On Calling Her An "Anchorwoman" Is Perfect

"It's Anchor PERSON." Thank you, and good night.

21. There Are the Weirdest Pet Names In This Movie

22. This Guy Is The Most Disgusting Perv On The Planet

"So come on, lie down and take a memo," might be one of the most vomit-inducing lines ever in cinematic history.

23. Why Is She Sleeping On The Couch In Her Parent’s Huge House?

Ah well, at least she went and cuddled with her mom. It's totally awesome, even when you're 30.

24. I Totally Forgot About This Song

26. How Did These Girls Go From Never Hearing "Love Is A Battlefield" To Knowing The Words AND Dance?

27. This Sentiment Is Still Quite Relevant

“I want to see women who are smart and pretty and happy to be who they are.” I do too. At least that's finally starting to change... a little.

Sorry your character sucked in this movie. You're still cool though.

29. It's Cool She Goes Back & Gets Matty, But It Kinda Sucks For Wendy Right?

I hope Wendy still gets a happy ending.

31. Does Jenna Still Get The Career She Wants?

Because a hubby and a house isn't everyone's dream, ya know.

More like this
Lindsay Lohan & Jonathan Bennett Celebrated Mean Girls Day Very Differently
By Jake Viswanath
20 Photos Of The 'Hocus Pocus' Cast Then & Now
By Radhika Menon
12 ’90s Movie References You Missed In 'Do Revenge'
By Radhika Menon
24 Years Ago, 'Friends' Dropped Its Most Underrated Ross & Rachel Episode
By Grace Wehniainen
Get Even More From Bustle — Sign Up For The Newsletter